A BangShifter Abroad, Part 2: It’s Not The Journey, It’s The Destination 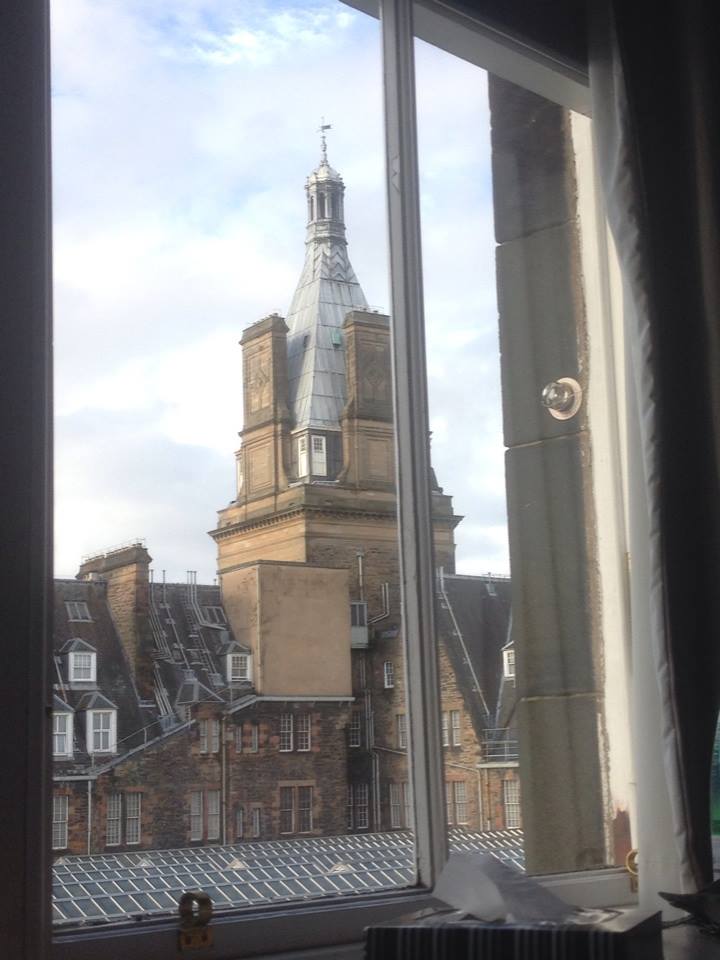 At six in the morning, my wife started shaking me in the usual morning ritual of waking me up, which is normally where she shakes me out of deep sleep, then I lay there for a few minutes contemplating the pros and cons of going back to sleep while our two cats, who were woken up by her movement, decide that the large human with the hair on it’s face is warm and proceed to turn the crack of dawn into Cuddle Time With Daddy. Now that I don’t have a cool pillow left and the lights are on, I begrudgingly rise and walk to the kitchen for breakfast like a half-stoned Frankenstein. Ok, I’m awake. Let’s do this.

Once breakfast was had and all of the suitcases and bags were loaded into the Silverado, we headed to Nashville International Airport to catch our first flight to Newark, New Jersey. Mercifully, with it being early morning on a Thursday, the lines were near-nonexistant and even TSA security wasn’t it’s usual grope-fest. Unfortunately, my father-in-law didn’t have the luck I had, as he was stopped and frisked a little more vigoursly than normal. As I was putting my shoes back on, I took notice of an older gentleman with a Tom Selleck-style moustache picking up his guitar case from the scanner. Sometimes Nashville can be a really cool place, because that man was Tom Johnston of The Doobie Brothers, who was flying out the day after his performance at the CMA Awards. He seemed pleasant enough but I didn’t want to disturb him early in the morning. As we made our way down to the gate, we were startled by a small bird that was fluttering around. While nobody got crapped on, the bird did dart into the ladies’ room, which prompted a series of shrieks that only meant that the feathered fellow was where he wasn’t expected. Moving on, we grabbed a quick snack and headed to the gate. Luckily we had programmed in plenty of slack time into our itinerary because our United flight out was delayed due to traffic. While the pleasant enough voice through the P.A. system was trying to soothe our nerves, I kept picturing a tower full of Jersey stereotypes screaming and smiled a little. 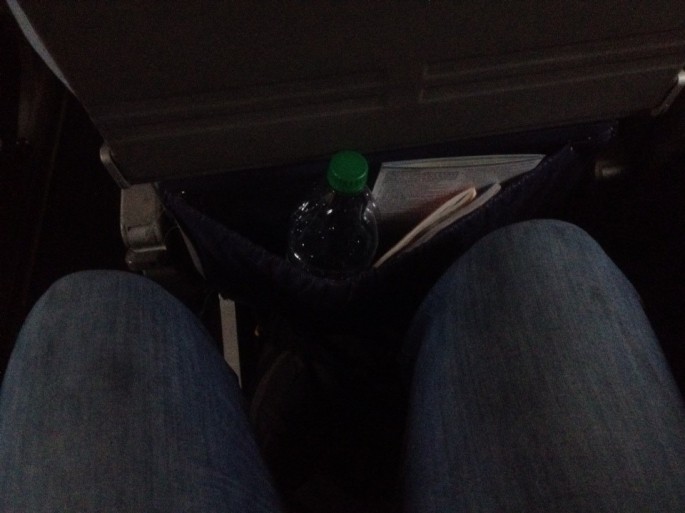 Mental note: ALWAYS pay for first class. I didn’t fit in the seat, or the plane for that matter. And don’t ask about the on-board toilet.

The flight quickly erased the smile off of my face. The smallest plane I feel comfortable flying passenger on is a Boeing 737. We ended up in an Embraer 145, the epitome of low-buck shuttle hopping. Stuffing my big ass into a seat that makes the front bucket of a Chevette appear roomy and comfortable, I settled in and in short order, was airborne. I’ve had some bad flights before, including a couple where I was at the controls, but that one is the new winner in the Airsickness Olympics: At every waypoint the pilot would bank the corner like he was trying to shake a MiG and about thirty minutes before landing, decided that taking that plane through a weather front was a good idea. I’m pretty sure you could go pull my fingerprints off of Seat 6A from where I held on for dear life. My wife was digging for the puke bag and I could hear my mother-in-law behind me making noises that indicated that she might retch sooner. Once the rattling quit, we descended forever through the clouds until we were maybe 300’ AGL, cruising over the shipping terminals, preparing to land at Newark. 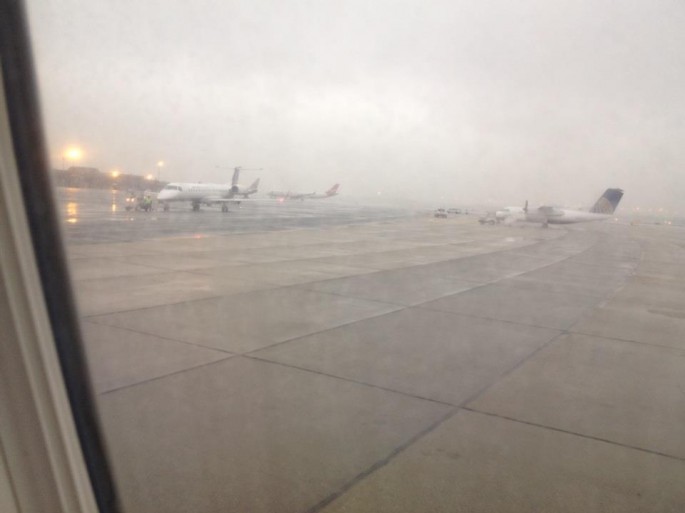 Newark is like the nasty, angry twin of Seattle: there’s cloudy weather, lots of rain and cool temperatures, and plenty of attitudes to go around. In place of Five Guys and Dick’s Hamburgers there’s Smashburger, there might be one Starbucks anywhere in this airport, and the throngs of people milling around will not stop if you try to cross the hallway, they will simply run your ass over. I was hoping to see the pigeon inside the terminal that Brian saw earlier this year, but alas, no such luck. We ate and waited to board our 757-200 that, during the middle of the night, would take us over the Atlantic to the British Isles. Red-eye flying at it’s finest, baby!

We landed in Glasgow at seven in the morning, First impressions: it’s more Seattle weather. It was in the low 40’s and misting a bit when we finally got out of the airport and crammed ourselves into a Transit Connect taxi to head towards our hotel at Glasgow’ Central Station area. First impressions: this is the land of the five-door hatchback. You name it, we saw it: Vauxhall, Ford, Peugeot, Renault, Citroen. Any semi was a cab-over, usually a DAF or MAN, though I did spot the occasional Mercedes Actros. Lots of Transits and their rivals. As for what’s familiar to our eyes in the states, there are lots of Toyota 86’s (Scion FR-S) and plenty of BMW’s and Mercedes that we normally see.

By the time we got to our rooms we had been awake for about thirty hours and were drained. Directly below us is Glasgow Central Station, where all the trains meet up before going out to the far flung throes of the land, and there’s museums and other things to see locally. Plus, of course, food to eat and cars to see. Hell, I might even hit the open water soon. But for now, it’s time for a well-deserved coma… 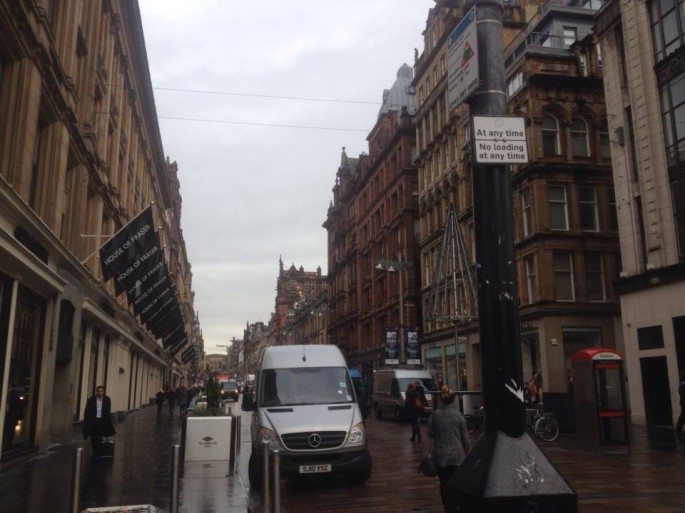 Take Count Of How Many Stunts This Polaris RZR Does During This Video (Hint: Two Are World Records) AWESOME BANGSHIFT APPROVED VIDEO: THE CHEAP ASS CHALLENGE - ICE BRIDGE EDITION

5 thoughts on “A BangShifter Abroad, Part 2: It’s Not The Journey, It’s The Destination”