Dec 01, 2008Chad ReynoldsBangShift NewsComments Off on Gale Banks Display at the Wally Parks 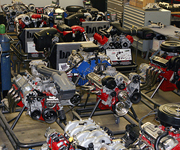 The photo shows just a few of the 34 engines that were headed out of Banks Engineering last week, on the way to the Wally Parks NHRA Motorsports Museum in Pomona, California, for this week’s Wednesday opening of Banks Power: The First 50 Years. We figure that means that Gale started the place when he was about 12, but OK.

Go here to read the blog from Doug Stokes, our man on the inside, or keep going to see his press release on the event:

Pomona, Calif. (November 5, 2008) – Gale Banks Engineering, an industry leader in high performance gas and diesel engine development, will be honored with a special exhibit at the Wally Parks NHRA Motorsports Museum on Wednesday, Dec. 3, 2008 at 3 p.m. Exhibit will run through September 2009.

“Banks longevity and contributions to the industry are such that an exhibit here at the Parks Museum seemed appropriate given that Banks’ is celebrating the First 50 Years,” said Tony Thacker, executive director of the Parks NHRA Motorsports Museum. “The new exhibit is sure to amaze visitors when they see first hand some of Banks’ masterpieces in automotive engineering and technology.”

A number of Banks’ record-setting racing machines and engines will be on display in the Museum including the world’s first diesel road racing pickup GMC Sierra; a 268 miles-per-hour Twin-Turbo Pontiac Trans Am; the Dodge Sidewinder® Dakota and the Sidewinder S-10 pickup trucks, as well as the El Mirage dry lakes record-setting modified 1953 Studebaker. There will also be a number of interesting (and mostly twin-turbocharged) racing engines on display.

“We consider this invitation a great honor,” said Gale Banks speaking about the just-announced plan of the Wally Parks NHRA Motorsports Museum in Pomona, California to honor his namesake company on the occasion of its 50th anniversary.  “We’ve won plenty of races and set many speed records over the years, but this really tops them all,” said Banks.

Recently announced to receive a Distinguished Service Citation in 2009 by the Automotive Hall of Fame, Gale Banks has made a significant impact in the automotive industry, and the Parks NHRA Motorsports Museum is pleased to showcase American ingenuity at its best.

“Being elected to SEMA’s Board of Directors last year was really great.  The people who I work with there are the best in the business,” said Banks.  “And now we have a long-form exhibit at one of the great automotive museums which allows us to salute all the people who got us to where we are today!”

Surprise “guest appearances” by some very special Banks vehicles are also planned over the run of the exhibit, such as the new Banks Sidewinder rear-engined diesel Top Dragster, and as machines become available from other museums and private collections.  Updated information on the appearance schedules of those machines will appear on both the Museum’s and Banks’ websites.


The Wally Parks NHRA Motorsports Museum, presented by the Automobile Club of Southern California, long a dream of NHRA founder Wally Parks, opened to the public April 4, 1998, Housed in a 28,500-square-foot building on the edge of the historic Los Angeles County Fairplex, the Wally Parks NHRA Motorsports Museum’s mission is to celebrate the impact of motorsports on our culture, and the West Coast’s role as the historic center for their past and present development. Visit us at www.museum.nhra.com.