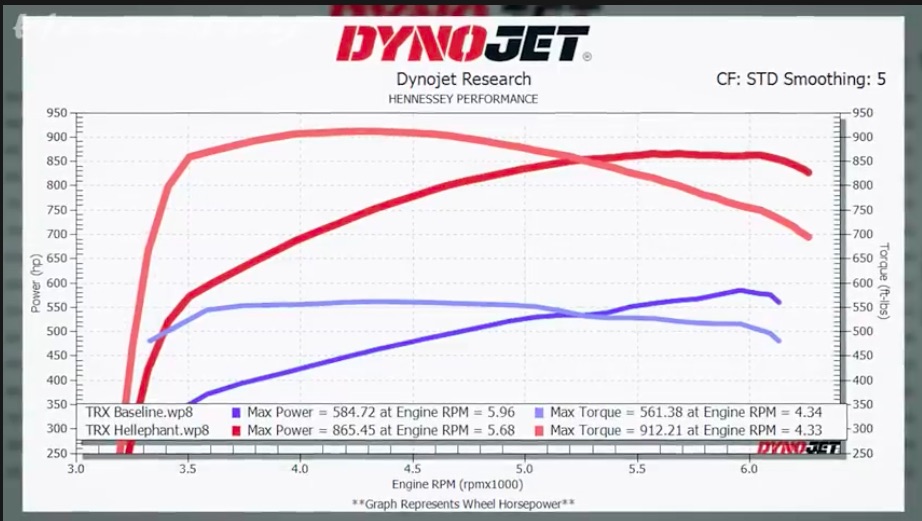 The Ram TRX is one of the coolest trucks on the market today. Designed and tested to be a more capable and totally awesome rig than the Ford Raptor, it packs a 702hp punch along with the off-road components, suspension, and attitude that comes along with it. Well, as we know in this world too much is never enough and that means the TRX is not only a good candidate to be hot rodded, it is actively BEING hot rodded. The people at Hennessey have taken the next logical step with the truck and bumped the power a little…or a ton. Rather than mess with the 702hp engine in the rig, they went to Mopar and ordered a Hellephant crate engine. Yes, the one which makes 1,000hp.

Not shockingly, the install looks factory fresh as it is basically the same engine with “more” internally. More blower, 426ci, and far more power. The idea here was to do it this way and run the engine off the computer in the truck because they wanted to keep all the functionality that the factory installs.

The touch screens, modes, widgets, and buttons all function as advertised in this thing and even better is the fact that the engine swap increased the horsepower at the wheels by about 200. The sound is wild, the truck is awesome, and we’d sell a kid (debating on which one at the moment) to own this rig. Talk about amazing?!

Press play below to see what a Hellephant swapped Ram TRX does on the dyno!