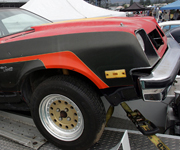 Anyone remember this? In the Oct. ’82 issue of Hot Rod magazine there was an engine-swap story that included a few pages on the Hooker Headers ’76 Chevy Chevette that was treated to a Buick V6 using one of the company’s swap kits. I remember being at Hooker’s shop in the very early ’90s when it was on Brooks Street in Ontario, California, nearby where Total Cost Involved is now. I was working on a story about the big-block kits for third-gen F-bodies, and the Chevette was one of the forlorn old projects in the lot.

I can’t tell you what happened to it between then and now, but I spotted it at the Pomona Swap Meet last weekend. It’s now in the hands of of the guys from Street Rodder magazine, and he found it in a junkyard. The sticker on the plate makes it seem as if it has not been registered since 1992.

You’ve spent nearly two decades wringing your hands over the fate of this historic bit of Chevette history. Now you can rest easy. If you must own it, pm me and I’ll send you the contact info. Blowfish Coming to a Small Screen Near You WJ and KJ Dropped by GM?