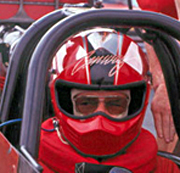 There have been rumors for about a year coming from different places about someone or multiple people running injected nitro motors in doorslammers. The guessing games are over as it seems Tom Conway, a heavy in the world of A/Fuel drag racing is going to give it a go.

Several months ago some rumors started up about Dave Hirata deciding to do the same thing, but his plans never progressed much past the conceptual stage. Conway, however, is having two cars constructed and plans to be on the track to run in the ADRL’s Pro Extreme category.

He’ll be squaring off against the occasional turbo car in that category, but the majority of his competition will be screw-blown, alky burning Pro Mods.

If you have never heard an injected Nitro dragster on a “full load”, or in layman’s terms 96-98 percent nitro, you haven’t lived. As weird as it sounds to say, at idle they make a blown nitro dragster sound downright tame.

We look forward seeing this thing progress and frankly, we know a guy who knows a guy that may be able to feed us some inside dope on the situation. We will be buying a ticket (oh wait, ADRL has free admission) to see this car (or cars) make laps. It’s going to be epic!

Snatching Defeat From the Jaws of Victory: The G8 Sport Truck May Be Killed The Violation Game: Too Much TV