Morning Symphony: The Tri-Ace Drift Ute – A Little Bit Of Australia And A Whole Lot Of Tire Smoke…In California.

Dec 14, 2016Bryan McTaggartBangShift NewsComments Off on Morning Symphony: The Tri-Ace Drift Ute – A Little Bit Of Australia And A Whole Lot Of Tire Smoke…In California. 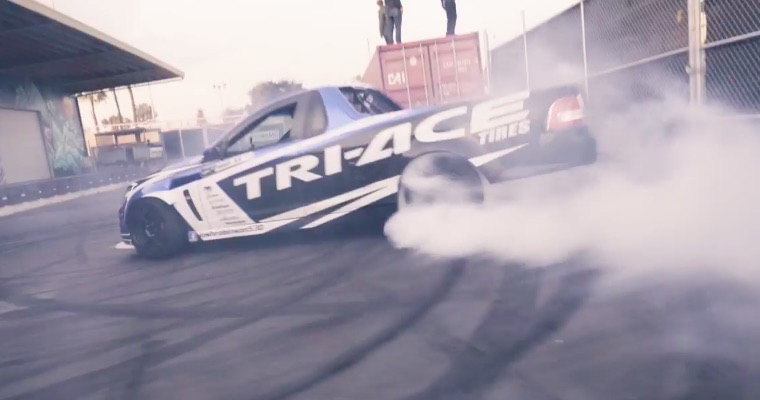 When we met the Tri-Ace drift team and their 2016 Holden Ute at SEMA earlier this year, we were greeted by genuinely nice guys and their coupe-utility that was filled with unbridled hatred for tires. Josh Robinson and his teammates had shipped over the 2016 Holden for the SEMA show and, as we were told, “a couple of events” before heading back to Oz. Apparently one of those “events” involved stopping by the Donut Garage to clear up any differences between how Aussies make donuts versus the Americans. Whether it is the right or wrong way, Robinson looks perfectly at home behind the wheel as his supercharged monster proceeds to rattle windows for several city blocks while vaporizing the rears into extinction. Though, if you ask any of his fellow countrymen, this is just another work ute…though, we call B.S. after seeing the floor-less bed filled to the brim with suspension and radiator. Do we care that it can’t haul a piece of plywood? Not in the least.