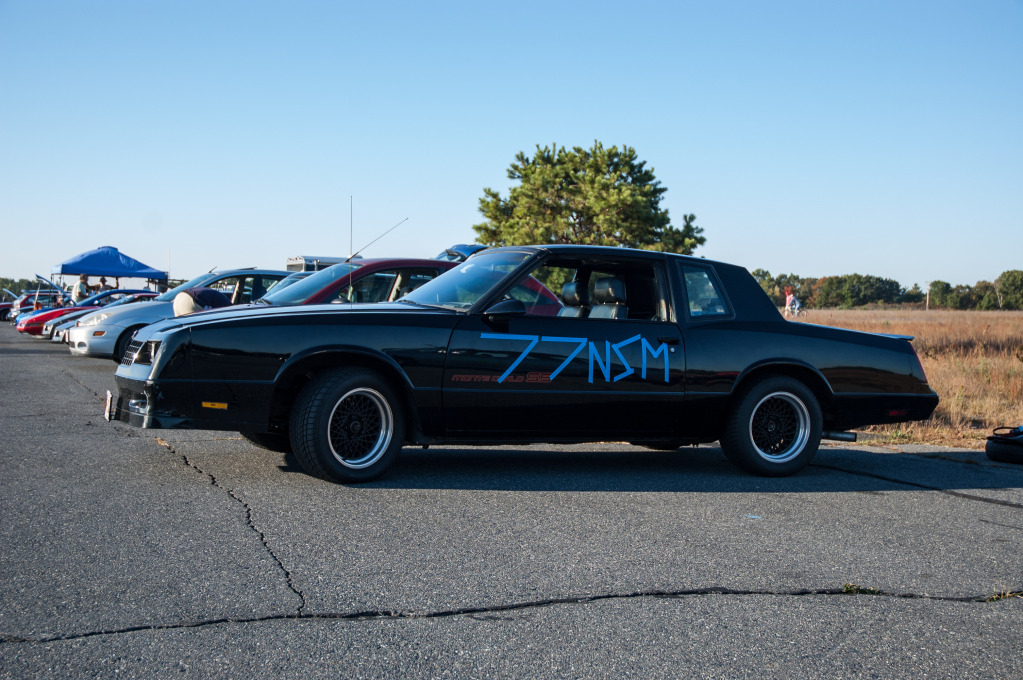 Yesterday, Rodney wrote a really interesting piece on the cost of building a high performance car and how in many cases it may make more sense to purchase a finished product if you in any way value your time, money, or marital status. Not surprisingly, more than a few of you guys and girls tore into him for daring to suggest that a decent car couldn’t be built for less than $50k.

I’ll admit that my initial reaction was similar to many of yours, and I even shot a message to Brian to that effect: 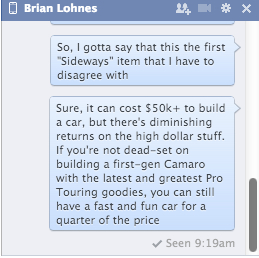 I’m a champion of the “bang for your buck” performance build, as can be witnessed by my fondness for the DeathMobile RX7 and the XJ-R Cherokee. Heck, the Cherokee was built for less than $2k and regularly beats down on more expensive cars at the autocross. So, how dare he suggest to the son of a family friend that he just go out and buy a new car? That is the most un-BangShift response I could ever imagine.

Then, it hit me: I wasn’t taking into consideration the neighborhood that Rodney lived in. Well, not where he actually lives (I have no idea where Rodney lives, and he probably wants to keep it that way…), but the metaphorical neighborhood that consists of his automotive peers.

If you’re like me, you’re probably living in the “automotive suburbs”, where you may be that guy or girl in your area that your neighbors refer to as “The one that’s really into old cars” as they read the latest MotorTrend article on which Hybrid has the best cupholders. Sure, there may be a few other cool cars around, but the relative quality bar is pretty low, so it may not take much to stand out in the crowd at a local car show or event.

Meanwhile, Rodney’s car lives and performs in the equivalent of Beverly Hills, where the old adage of “Cheap, fast, good: Pick two” has morphed into “Fast, Beautiful, Exclusive: No exceptions”. This is the land where spending $4000 in wheels and tires means that you most likely bought used, and if your front calipers don’t have at least 13” rotors and four pistons, you’re slumming it. 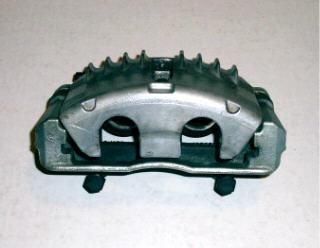 Lest you think I’m being my normal sarcastic self, I’m not (Well, not entirely, anyway). This is just the reality of what it takes to have a competitive car at the major Pro-Touring events. Rodney’s car is awesome, and I have mucho respect for everything he’s done and the time and effort that it takes to build a “budget” car that can stand toe to toe with the big name Pro-Touring cars at these events. So, when he says that you can’t build a car from scratch for less than $50k, be mindful of the fact that this is close to the floor, if not slightly beneath the floor, for the typical high-end Pro Touring event. It’s like an Ivy League school where you’re nothing if you weren’t the valedictorian of your high school class, because all of your new college classmates were. Every one of these cars would be a showstopper at a “normal” show or event, and now there’s an entire field of them. Hate to say it, but like attending an Ivy league school, hard work alone is most likely not going to hack it: You need to be able to cut the monthly check as well.

The thing is, do you really want or need a full-blown top shelf Pro-Touring car, the one that will be covered in all of the magazines and be hung up on the walls of fellow gear heads as inspiration to keep wrenching away on those cold winter nights? We all naturally want to say “Yes” because we all want to have built something beautiful; it’s human nature. That said, beauty is relative, which we all need to consider when building our cars (I realize that you may be worried that this is going to turn into some sort of “love what you have” self-help nonsense; stay with me here…).

What I’m really trying to say is that I want to see more cars being built with a focus that allows you to get the most out of your money in regards to the performance returned for the time and effort put in. Sure, you can call that function over form, but I’m not saying to completely toss form out the window: Slot car handling doesn’t mean much if your slot car looks like tetanus on wheels.

As with anything else, there’s sometimes diminishing returns to scale when it comes to dollars spent versus performance gained. Let’s use wheels as an example: I’m may not be winning many fans among some of the more exclusive wheel manufacturers, but for 90% of builds you don’t need a three-piece billet “hope the kids get a scholarship to college because I just blew their tuition money” set of wheels.

Here’s my personal checklist:
1. Do I like the way that they look?
2. Do they clear the brakes?
3. Do they fit without any clearance issues in regards to frame and/or body?
4. Do they fit the size tire that I need? (Notice I said NEED here, there’s a reason that the new Camaro 1LE uses relatively narrow tires on the rear wheels…)
5. Are they reasonably light for their size?

If the answer is Yes to all of these questions, then those wheels should be a serious contender when it comes time to spend your money. Where the “diminishing returns” comes into play is when you convince yourself that you need the lightest and strongest wheels on the market and/or eleven-inch-plus wide wheels to fit a tire with a width that begins with the number “three” when the overall performance theme of the car doesn’t deem them necessary. I am not saying that you shouldn’t buy those wheels, but think long and hard about the potential added expense (If there is any) over another set that also satisfies the above checklist. Are you really going to get $xxxx more performance value out of the money spent? Maybe, but that needs to be seriously considered before opening your wallet.

I’m not saying that you shouldn’t spend money on good parts for your car, just that as gear heads it’s easy to fall into the trap of buying the equivalent of the gnarliest camshaft on the page when you’re planning on building a motor for a street car that will see an occasional quarter mile blast.

A well-sorted “True” budget car with money spent on the right parts can stomp all over a car that may have twice the cash spent on components that may deliver twice the performance on paper but do not work twice as well in unison (As a quick example, at a Pro Touring event I may have witnessed a well-sorted, sub-$15k invested car owned by one of the “setup” guys for the autocross portion hold its own against $$$ professional builds.). Nothing wrong with those high dollar builds as they were all very nice and very fast, but sometimes there’s more than just being pretty and having top-shelf parts.

Other than random G-body trivia, I am admittedly not an expert on anything automotive-related, but I’m always willing to learn. One of the things I’ve learned is that you need to thoroughly plan out a build and research as much as possible if you want to get the most performance value for your time, effort, and money. Unfortunately, I learned this by spending what has amounted to thousands of dollars on the “wrong” parts (Nothing actually wrong with them, but they didn’t meet the goals for my car), although I did get to install two engines, three different fuel injection systems, and disassemble a front suspension or two as part of this learning experience. A good chunk of this money was spent on parts where I gave more attention to my wallet than to the quality of the parts themselves, so you do often get what you pay for. The inexpensive set of overseas-manufactured gauges installed in my SS that work MOST of the time are a testament to that.

The older vehicles that we love often don’t come from the factory perfect in every respect, and with the right parts installed it is possible for them to perform as well as any of their more modern brethren. The question is, are you out to chase down the guy next door in his new BMW or Porsche, or the guy in Beverly Hills with the exotic? Both goals are possible, but you need to figure out which one you really want.

So yes, it may take $50k+ to build a car that will fit in at a local Pro Touring event, but that doesn’t mean that you can’t have 90% of the performance and the appearance for 50% of the cost if you spend the money in the right places. 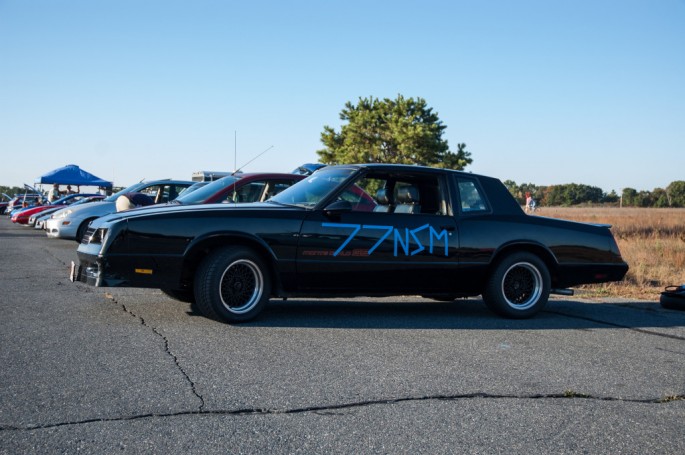 The Roadkill to End All Roadkills - Motorhome Mayhem Saves A 1968 Charger BangShift Question Of The Day: Does Your Significant Other Think You Are As Hard To Shop For As Mine Does?