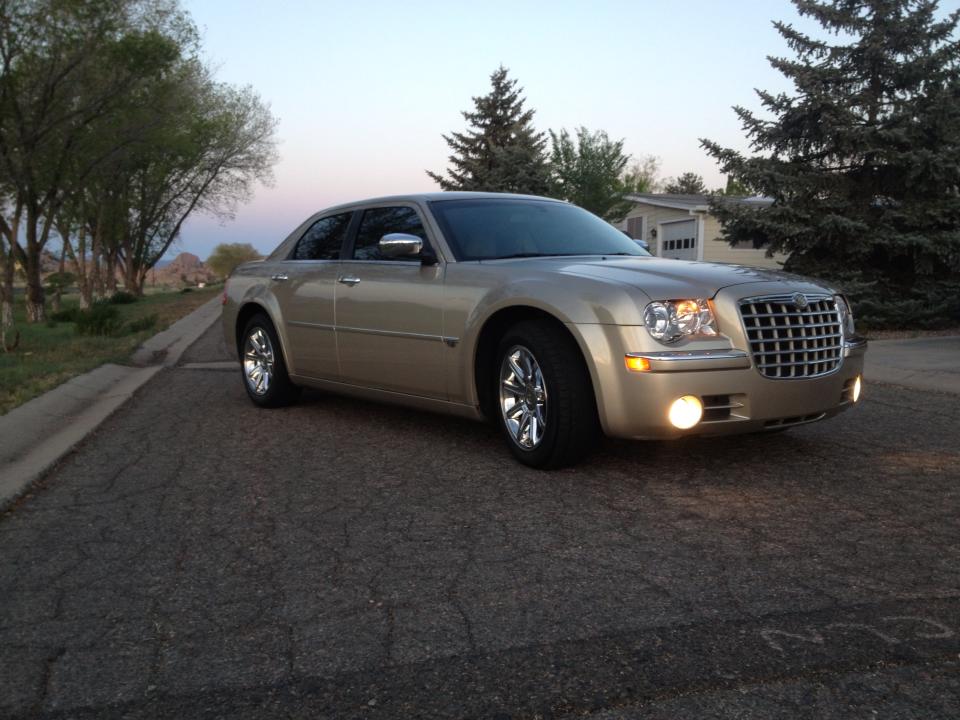 After running my 2006 Chrysler 300C at London Dragway in Kentucky, I drove away both very impressed and wanting more. The big barge had turned better times than I was expecting; honestly, instead of the 14.8 that the car did run, I was expecting a mid-15 second time. The 300 has plenty of potential, but being a Chrysler, and not a Charger or Challenger, Chrysler saddled it with options that were targeting the geriatric crowd: a suspension setting that is pretty much marshmallow, gearing that is meant for cruising at the lowest possible RPM ever, and an exhaust note that isn’t going to scare a field mouse. Here’s a tip: if the word “HEMI” is going to be emblazoned across the vast expanses of this car, the loudest noise that it makes should not be coming from the cooling fan or the key-in chime.

I’ve blamed my love of Mopars on the influences of my grandfather, Ken. Ken was a lifelong Mopar buyer for decades, usually driving Chryslers. His pattern was very typical: Nice dark color, the highest-level interior, the most powerful motor, and the quietest exhaust note possible. His cars are a laundry-list of this pattern: 1977 Town and Country, 1984 E-Class, 1989 New Yorker, 1993 New Yorker Fifth Avenue, 1998 Intrepid. Ken liked his cars quiet, unassuming and pimped out. His grandson, on the other hand, couldn’t be a further polar opposite. When I moved in with him at the age of 16, I bought a loud-by-obnoxious Monte Carlo SS that had only the basest of luxuries (stereo and t-tops), faded paint, and loud pipes. I loved the car. He hated it so much that one night, when he was in the middle of Heart Attack #6, he actively insisted that we take his car instead of mine to the emergency room (even though by that point I knew my car was seriously faster.)

Therefore, with that backstory in mind, meet BangShift’s newest project car, Project Angry Grandpa. Why that name? Easy: Stock, Grandpa Ken would love this car. But with what I’m gonna do to it, he would be reaching for his blood pressure meds while screaming at me, blue in the face. Some minor touches have been done, like tinted windows, but overall, this thing is as stock as it gets. I found it in the used section of a Ford lot in Prescott, Arizona and got it for $13K…after a ton of issues with the dealership. It was a low-mileage car that had been owned by snowbirds. Even now, at eight years old, the car only has about 84,000 miles on the clock.

The first thing that was necessary for the 300 was to actually sound like it meant business. In stock form, the 5.7-equipped Chrysler whispered wherever it went with an exhaust note that sounded more Camry than Hemi. Magnaflow stepped up and solved our problem with their cat-back system for 5.7-equipped Mopar LX cars (300/Charger/Magnum, p/n 15629). This is a bolt-in stainless steel replacement system that deletes the freaking huge “suitcase” muffler and equally huge end mufflers for two reasonably sized mufflers and a resonator. All of the stock hangar locations are used and the system comes complete, ready to go. Anyone who can spin a wrench can put this together easily. If I can do it under an oak tree in the grass, you can do it in your driveway. Trust me. Check out the photos below and see what it took to get Angry Grandpa’s yelling up to the right volume. The video is at the bottom of the page and the sound is great! We love it! 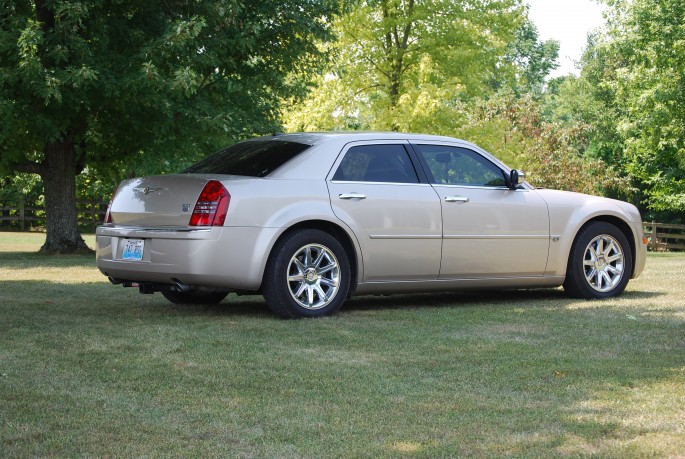 It looks so docile, so peaceful, doesn’t it? Not for long. There isn’t much I can do about the gold paint but there’s plenty I can do to get this barge to a more respectable level. Let’s start with the Angry Grandpa’s voice. 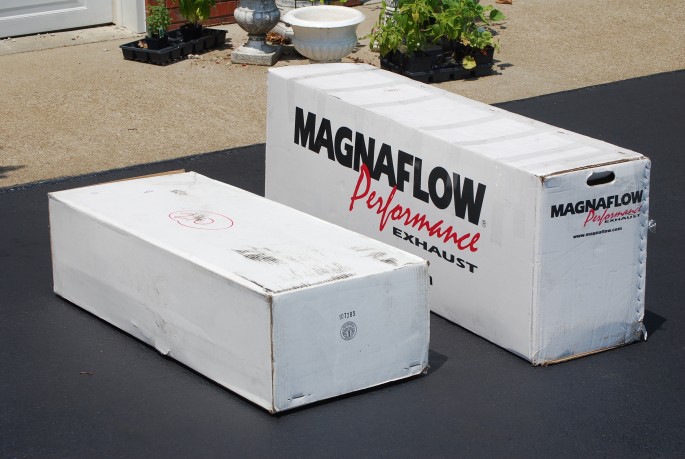 Thanks, Santa! These two boxes were left outside of the house one afternoon. (Hey, UPS: Is that a normal thing?!) The box on the right contains all of the stainless-steel goodness that is going under the 300C. The box on the left? It’s also from Magnaflow…but it’s meant for someone else. Whoops…

ALWAYS read the instructions, kids! This will save you a lot of hassle and headache in the long run. Mangaflow’s instructions are as easy and descriptive as you should need if you are taking this job on yourself.

This is what has been giving the Chrysler the silent treatment: one huge muffler at the halfway point, and two deceptively huge mufflers at the end. This all will be coming out. That trailer hitch is going to come off at this time, too.

Step one: Unhook the battery. Since all of the LX/LY cars have a trunk-mounted battery, it’s time to take the old floor mats, the chair Lohnes left at NHRR, three old work shirts, two tons of paperwork and a header meant for a 426 Hemi out of the trunk so I can access the floor panel and unhook everything.

Here’s what I meant by “deceptively huge”. This is the driver’s side pipe, the only part of the original system that comes out on it’s own. Compared to the Magnaflow system, the muffler looks bulbous. And it weighed a lot more than I was expecting, somewhere near 60 lbs.for this section alone. Good riddance.

The factory system uses clamps that are just like the ones supplied by Magnaflow. Up to this point, everything that I had torn apart only needed a 3/8 ratchet set to take apart. Then I met these, and even with a 1/2 drive ratchet, they simply were not budging.

While I’m not suggesting that these couldn’t have come out without a portable impact driver, I will say that they came out a hell of a lot easier with one.

Wrestling the remainder of the 300’s stock piping out of the car damn near put me to heat exhaustion. Here’s the side-by-side comparison between the two kits. Yes, I’m working in the grass under a tree. Circumstances dictated that I had no other option, and I took every precaution I could short of putting the car on bricks.

This is the “suitcase” muffler. Together with the attached pipe, this section was easily over 130 lbs. 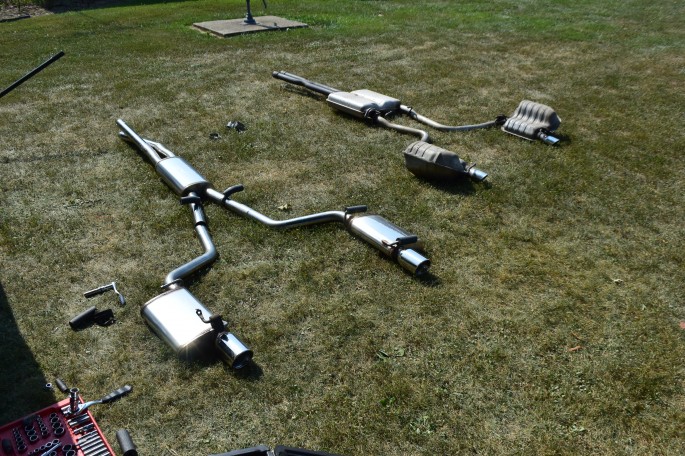 Every hanger spot is exactly where it should be on the car. The hangers themselves are reusable and provided very little resistance. 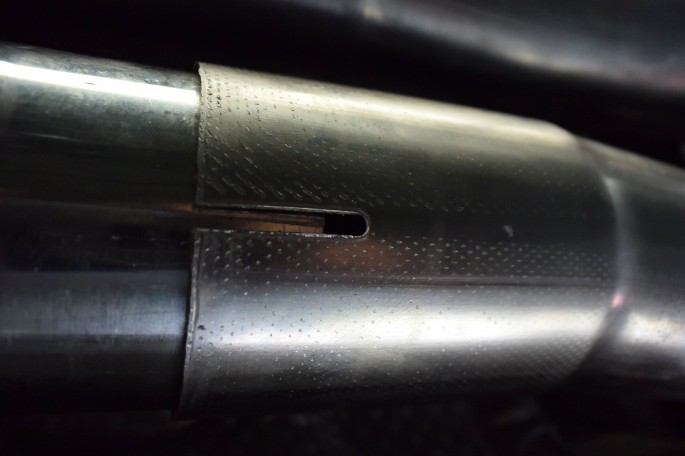 One of the trick things that Magnaflow does is to notch the larger of the connecting points so that the installer can see if the smaller diameter pipe is seated enough. In this case, no… 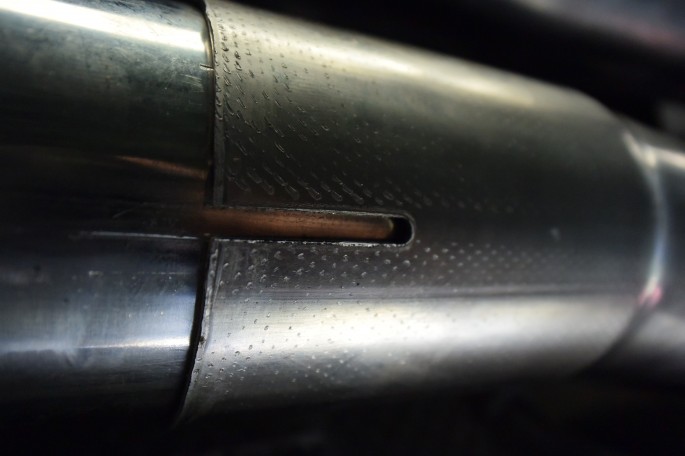 …and in this case, yes. (Forgive the shadow effect, but believe me when I say that there is no gap visible, just metal.) 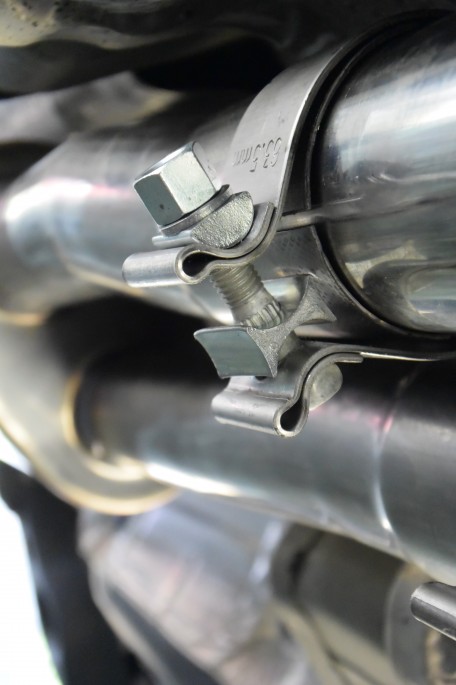 These clamps are provided with the kit. Just slip them over the smaller-diameter end before assembly, set in place once the pipe is positioned right, and snug down until you’re ready to torque. 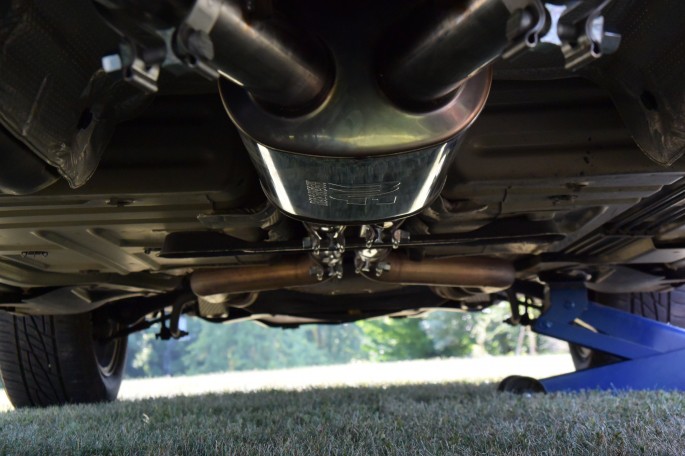 Once everything is aligned and positioned properly, torque all clamps to 40 ft/lb, and any hangar brackets you may have removed back to factory spec. 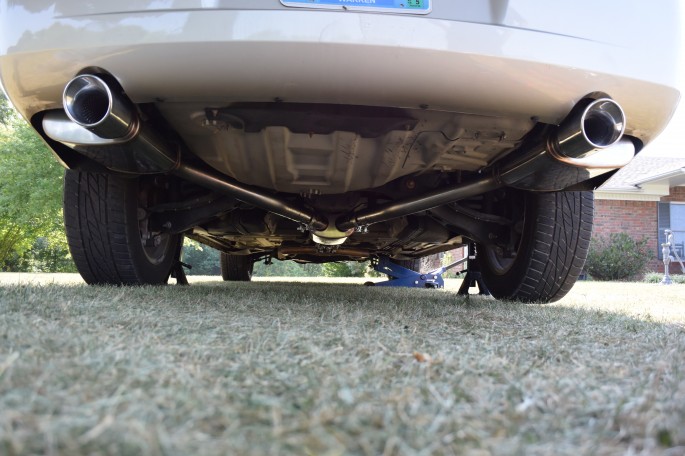 It took two hours to pull out the old system, about forty-five minutes to get the new system in, and counting breaks to cool off and get water, about five hours total. There is nothing to this kit. Magnaflow has done the heavy lifting for you, with everything measured out and ready to go, straight from the box. All that’s left to do is put about fifty or so miles on it and check the torque on the clamps. The only issue I had with the kit was an adjustment that was needed so that the catalytic converter extension pipes didn’t make contact with a crossmember. That’s it. The sound is quiet but authoritative at idle and low throttle and is not intrusive at cruise. There is no drone at all.

Check out the before and after video below!

UPDATE: The rattling noise returned. Ronnie at Modern Automotive in Bowling Green, KY threw the 300 up on a lift, where we found that the pipes were contacting the crossmember. Pipes were re-adjusted, and the crossmember was shimmed for additional clearance. Problem solved. Just because it’s well-done doesn’t mean that you might not find a small thing like this with a kit.

NTPA Mule City 300 Pull - Action Photos From Galot Motorsports Park Where It All Happened Predictable Move: Hellcat Challenger 001 Off Assembly To Be Auctioned At Barrett-Jackson (Charity Gets Dough, So It Is All Good)

6 thoughts on “Meet The Newest BangShift Project, “Angry Grandpa”, And Check Out The First Mod: A Cat-Back Magnaflow System!”