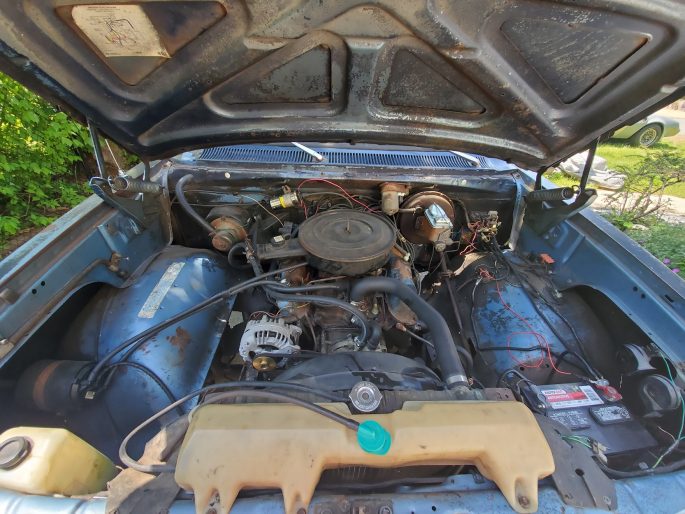 Welcome back to our coverage of Project Power Laggin’! Follow along as we take a tired 1979 Dodge W150 Power Wagon we found in Central Maine and transform it from a derelict roadside attraction to a dependable, powerful weekend workhorse that lives up to it’s given name! In this installment, make a big decision on how to add more power while increasing reliability, and we end up choosing something unexpected: MSD Atomic EFI!

At the end of our last installment, we talked about our desire to add “power” while counteracting the “laggin'” to our old rig, especially to compliment the the excellent Hooker headers and exhaust we installed. One thing we knew right away is that this solution would also not only need to increase performance, we also wanted to increase reliability and efficiency as well. Originally, our thoughts were to grab a Weiand intake and a Holley 4bbl carb like the Truck Avenger to help the old 318 breathe better with the headers and exhaust, but after talking to our friends at Holley Performance and MSD, they clued us in on something new: their MSD Atomic 2 Fuel Injection system. Fuel injection? On this old thing? That has us both scared AND excited! It didn’t take much convincing…

Holley and MSD launched the latest version of their Atomic EFI system, the Atomic EFI 2, in early 2021. Much like the older Atomic EFI and the popular Sniper EFI systems, the new Atomic EFI 2 offers an easy way to update an older vehicle with the modern reliability and ease of tuning of a simple EFI system. It’s a self-learning EFI system that can also be custom tuned either right on the supplied handheld touchscreen controller or through the Holley Sniper EFI application on a PC. It offers both simplicity and control in a compact package, and they claim it requires just four wires to be hooked up to run. After over two years of fighting Power Laggin’s problematic fuel and ignition systems, starting fresh with something like this sounded like the right thing to do.

Longtime BangShift readers may remember that back in 2014, our own Brian Lohnes installed an original MSD Atomic EFI kit onto Project Buford T Justice, his old Caprice. He liked the results, and Holley said the new Atomic 2, which released earlier this year, is an improved design that can do even more. Paired with a new Hyperspark EFI ignition box, coil, and distributor, as well as the previously mentioned Weiand intake, this promised to drastically increase performance, reliability, and fuel efficiency, all things which we need more of. And on top of that, we haven’t seen anyone install one of these setups on one of these trucks, making this a unique and cool opportunity to do something different than your typical intake and carb swap. Seeing that we’ve been struggling for years with keeping the stock stuff working properly, the decision was made to drag this old truck’s fuel and ignition systems into the 21st Century. Remember, this is an old rig from 40+ years ago that weighs 5000lbs with full time 4wd and 4:10 gears, and just recently, we were getting as low as 5mpg. FIVE. And that was unloaded! I’ve seen full sized motorhomes do better than that. That’s just gross.

So, without further ado, let’s see what we’re getting ourselves into! 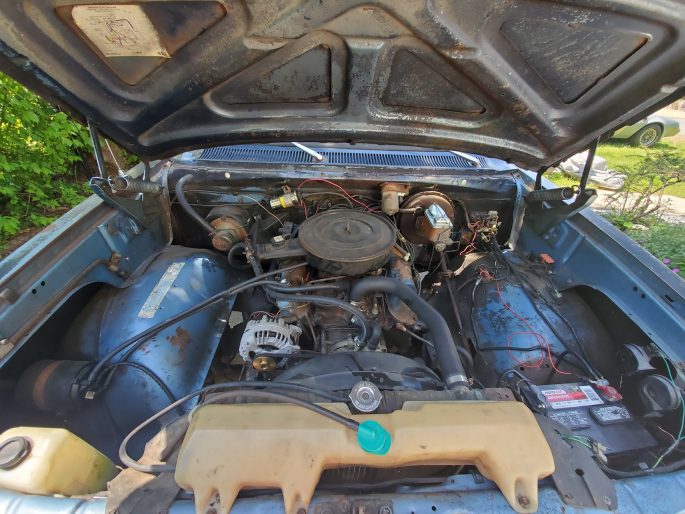 As a refresher, here’s what we are working with here. This is the original 318 V8 that came with the truck, bone stock. Back in 1979, that means you get a 2bbl Carter BBD carb sitting on top of a cast iron intake, equipped with all sorts of period emissions stuff that probably didn’t even work when it was new, let alone now. You also get a vacuum amplifier that is notorious for causing problems, along with a primitive EGR Timing module (which was beyond smoked when I got the truck, so it’s missing here) and diagnostic port to troubleshoot the system. Most of these components are no longer available, so when they break, they are bypassed. These engines produced 150hp and 250lb ft of torque when new. Who knows what ours makes 42 years after leaving the assembly line. The Atomic EFI 2 system is designed for a minimum of 200hp in mind, so we’re hoping the intake manifold, new ignition system, and the previously installed Hooker headers and exhaust will bring us right in the ballpark. 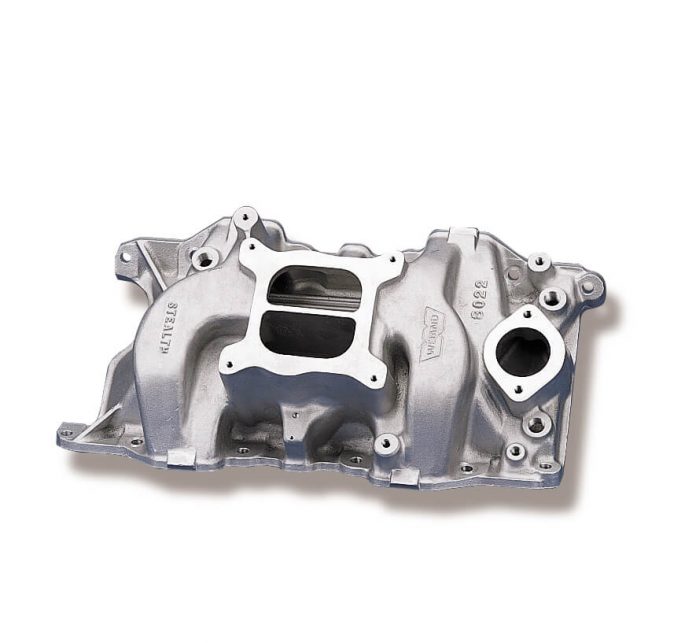 For the intake, we had two choices: the Weiand Action-Plus or the Stealth. Both are very similar, old-school intakes, but the Stealth had two differences: a squarebore mounting pad and it has a slightly broader power range, so we ended up choosing the Stealth. It still has all the ports we need for coolant and vacuum, and although it requires a different thermostat housing than the stock intake, ours was looking suspect and was on our list to swap out anyway. 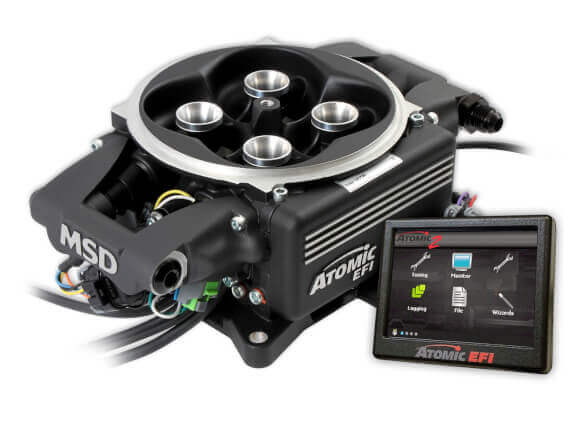 The MSD Atomic 2 system is a little bit different than the old Atomic EFI setup. While it still bolts on any squarebore carb pad just like it’s predecessor, there are a few differences: first, it’s now a return-based fuel system, so you’ll need to make sure your vehicle can accommodate that (we’ll get to that in a bit), and since it does have a return line, you’ll also need to order a fuel pressure regulator to go with it. Second, the ECU is now built right into the side of the throttle body, so you don’t have to mount another external box in the engine bay, making it a more compact package. Third, these now use the same color touch screen controller as the Sniper EFI systems, and they offer many of the features you get with those, including a myriad of customization options and even data logging. And lastly, the throttle shaft now uses roller bearings, which feels really nice. It’s a really slick system overall, and with its 865cfm throttle body, it can handle 650HP naturally aspirated or 635HP with forced induction, which is way more than our old stock 318 could even fantasize about making. You can even control wet and dry nitrous systems with it. They come in two colors: natural aluminum and black. We chose black, because the natural finish would be pitted after a few months of New England truck use. And man, does it look GREAT! These also use off-the-shelf TPS, IAC, and fuel pressure sensors, so if one fails away from home, you can find them at most auto parts stores. It uses a Bosch wideband O2 sensor (included) and has the ability to run electric fans and other accessories right out of the box. Very cool. 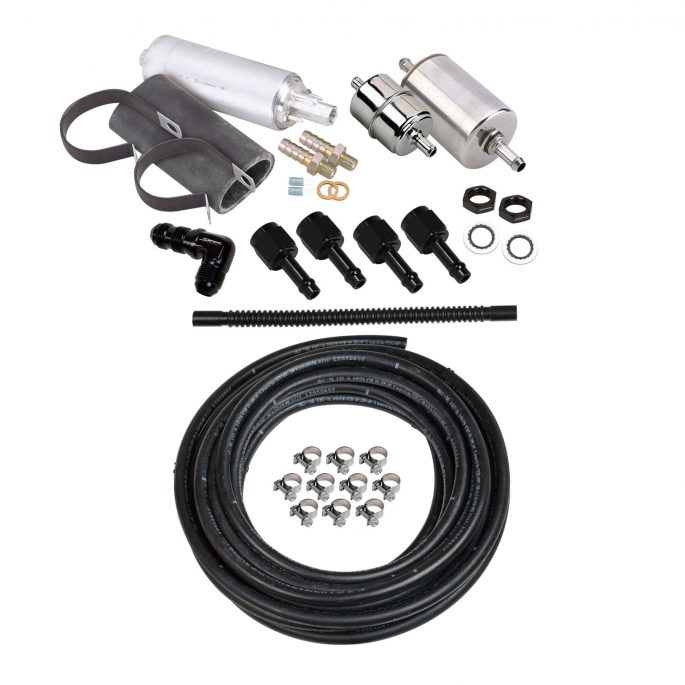 MSD and Holley sell the Atomic EFI 2 in two ways: as a bare unit or in a “master kit” that includes just about everything you need to get it installed on your vehicle, assuming your vehicle has a return system. Since we needed to install a return system from scratch, we opted for the bare kit and one of their secondary install kits that they sell which can accommodate this. It comes with high pressure 3/8 fuel hose (we opted for 40ft of it), nice Earl’s and NOS brand fittings, a bulkhead connector for the return line to either attach to your fuel sending unit flange or directly to the tank, a high volume fuel pump, pre-and-post fuel filters, fuel injection-compatible clamps, and more. They have a few different versions of this kit that have slightly different contents. 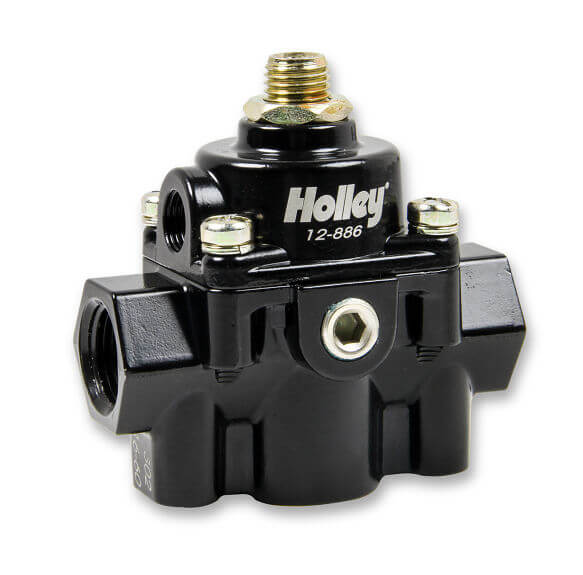 Our kit did not come with a fuel pressure regulator, so we opted to get the recommended 60psi regulator separately in black, part # 12-886. They also make a 12-882 one in polished, but like the throttle body, that would probably look good for about 5 minutes here in New England. 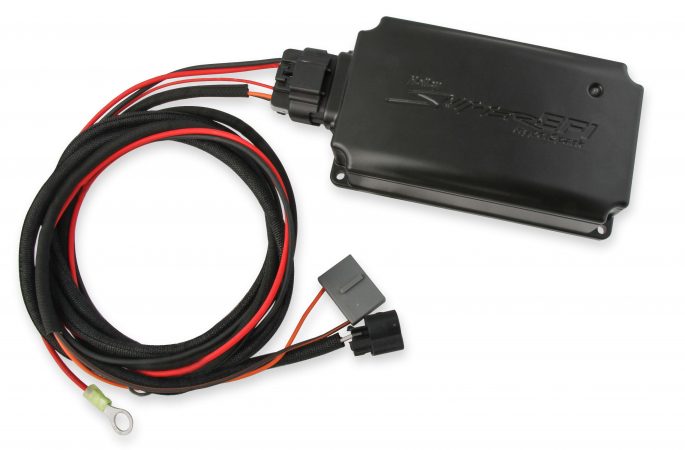 Our stock ignition is extremely suspect and has been for quite some time. Weak spark, weird wiring, and more had left us stranded before, and it would not be up to task to play nice with fancy fuel injection. Luckily, Holley and MSD offer their Hyperspark EFI ignition box, which pairs nicely with… 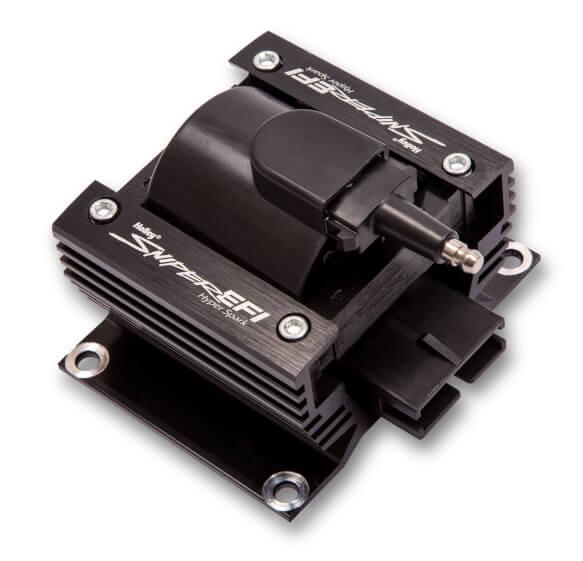 …Their Hyperspark ignition coil, which works great with… 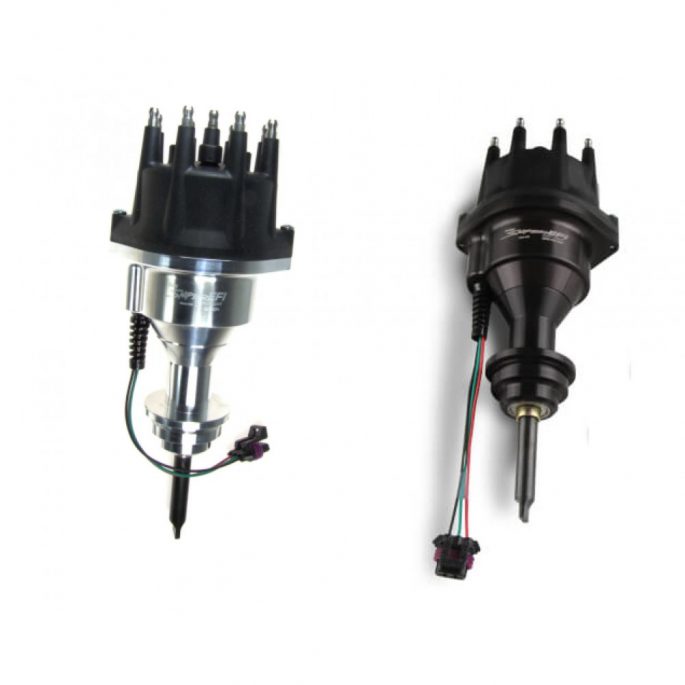 …Their Hyperspark distributor. These three components work in concert with the various fuel injection systems Holley and MSD offers, including the new Atomic EFI 2 system. The best part is that they require minimal wiring, and most of it just plugs into each other. We like that!

So, there you have it: we will be retrofitting this old rig with new tech that should help solve all sorts of issues that have plagued the truck since we dragged it home. We are beyond excited to get wrenching! The hardest part about the whole thing is that we are pretty much writing the book on how to do this swap to one of these trucks. To our knowledge, we may be the first ones to attempt swapping an Atomic 2 and full Hyperspark ignition onto a 1979 Dodge W150 Power Wagon, so we’ll have to use our wits paired with Holley and MSD’s instructions to make it happen. And we’ll be sure to detail all the triumphs and pitfalls as we bolt this stuff to the truck.

We want to hear what you think! Let us know what your thoughts on this swap are below in the comments section!

5 thoughts on “BangShift Project Power Laggin’ Update: We Decide To Go Atomic With The Old Rig!”