Project Raven: Pulling The Weak Engine And Dead Trans From Our Imperial 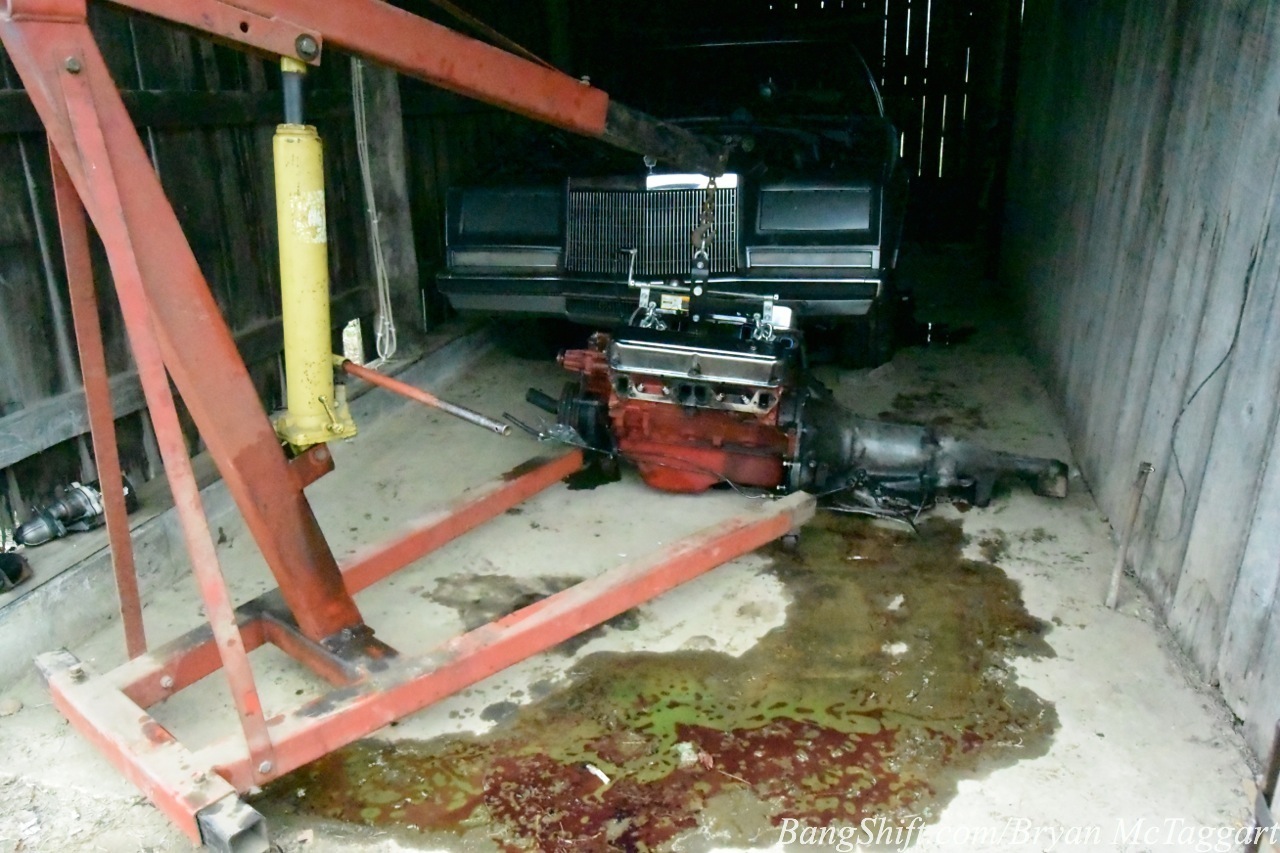 It’s been three months since the Project Raven Imperial unceremoniously blew the transmission at Beech Bend, and it’s been just a touch longer since the engine put up some seriously disappointing numbers on the dyno. Since then I haven’t done much, but finally, after months of sorting things out, finding a location, preparation, and a one-month vacation, the time finally came to rip the heart out of the beast. I spent about a week prior doing small tasks so that the actual engine removal itself would be painless. I yanked the accessories, pulled the radiator, and just when I was ready to undo the engine mounts, a big issue with the creepy old barn the car was sitting in came to light: the ground was so soft that instead of the car going up on the jack, the jack was being shoved into the soft earth. A bit of wrangling with the property owner got me what used to be a smokehouse, complete with cement floor. As an added bonus, he got to tow the Imperial to the new building with his tractor. The little John Deere never saw it coming, because if it wasn’t on perfectly level ground the front end would start to reach for the sky.

Once in the new shed, the mounts were undone and the fluids drained. This is where the first signs of trouble started to show: I drained the trans by pulling the speedometer gear out of the side of the TorqueFlite, and was promptly rewarded with a very dark red fluid that didn’t smell anything like ATF. My suspicion that the internals of the 904 being thermally damaged are pretty much confirmed. That night, while going to pick up the cherry picker, the trailer unhitched from my father-in-law’s Tahoe and decided to go it’s own way for a minute. Upon seeing the engine hoist in person, my doubts really began to set in…it was shoved in the back of the barn and looked like it hadn’t seen the light of day in ten years.

The next morning I set upon the car with my wife’s two uncles. The only easy part of this was when we removed the hood. After that, fate and the Imperial fought us tooth-and-nail. The cylinder on the engine hoist called it quits, blowing all of the oil out of the fill port and refusing to seal up. Once we changed the cylinder, we had to hack the driver’s header off of the main exhaust to get it loose. The starter wedged and took thirty minutes to free from the car. Blood was drawn from myself, and one of the uncles. The winner of the day was when we realized that we would have to undo the driver’s side motor mount from the block, something that I hadn’t done yet. This turned into one of those “one-click-at-a-time” adventures that, in forty-degree weather, really test a man’s patience. By the time the engine was freed from the Imperial’s engine bay, the other two men had expressions on their faces that hinted that I might need anger therapy, or maybe just a shot of some really good stuff. 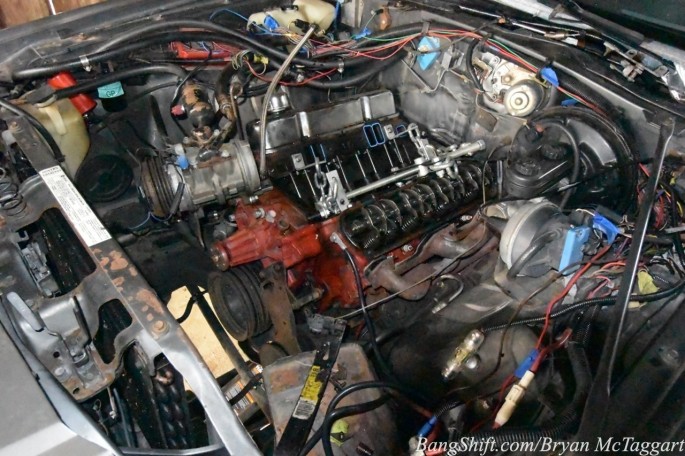 This was the starting point. The valve cover had to come off to remove the intake manifold, and we hoisted from the heads this time. 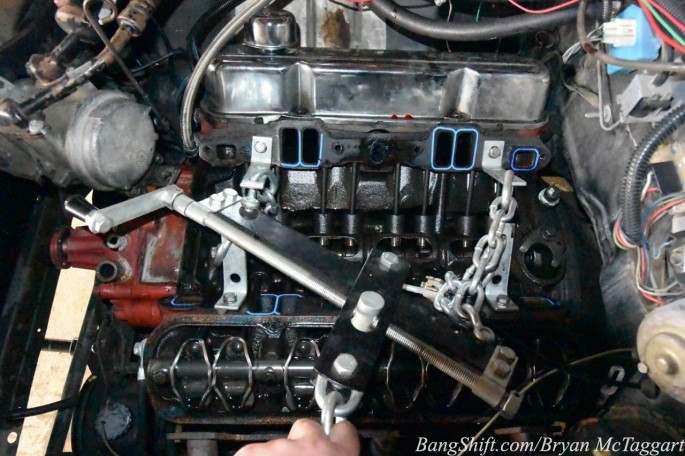 So far, so good. The cam, lifters and rods look ok so far, but my worries are in the bottom end of the engine. 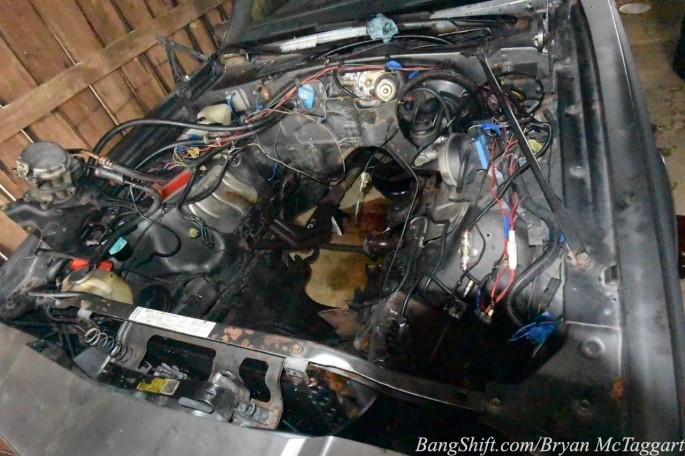 There were no “in-between” shots of work because we were fighting hard to get the engine out. From start to out was about four hours. 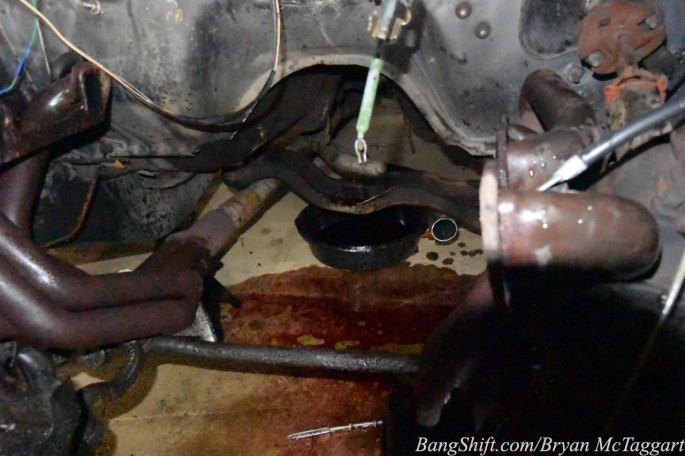 Somehow, this was the only cut needed: Just past where the header and the main pipe connected, to clear the transmission and to let the header move around. 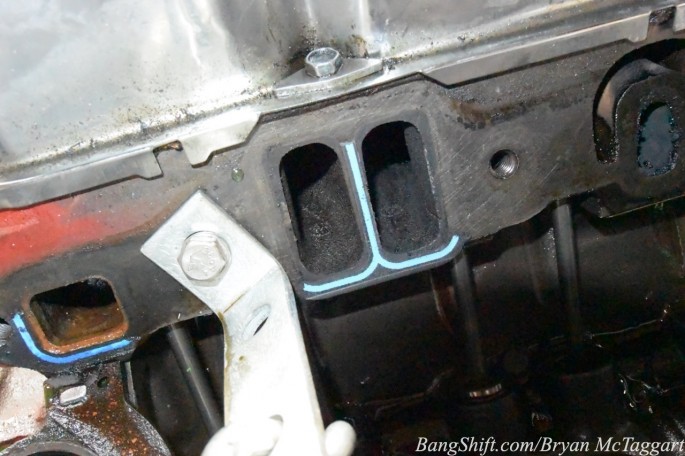 The only problems seen so far is the amount of roasted oil in the runners. This is due to the engine’s PCV system, which in it’s original configuration, allowed the valve to drop into the valve cover so far that it was picking up oil splash. 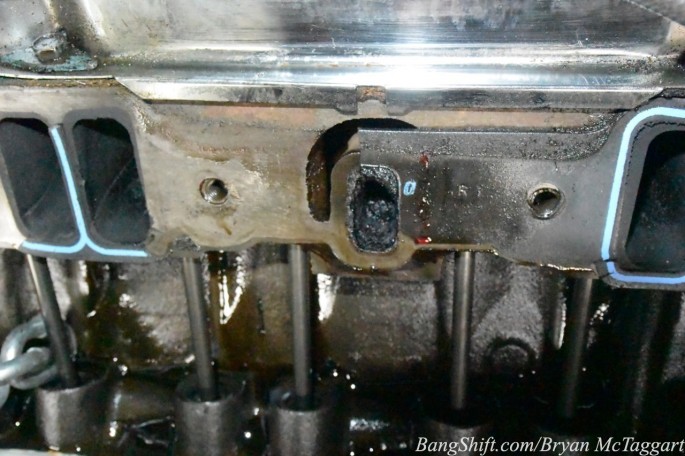 And then there’s these galleys, both of which are sludged out. Next round will be a dissection of the engine to see what’s good and what needs to be replaced.

Scrapple, Your Guide To The "meh"-worthy News Of The Week: Upmarket Scions, TopGear World, And More! Video: Watch America's Worst Truck Driver Systematically Wreck His Truck While Trying To Turn Around In Too Small A Space

9 thoughts on “Project Raven: Pulling The Weak Engine And Dead Trans From Our Imperial”