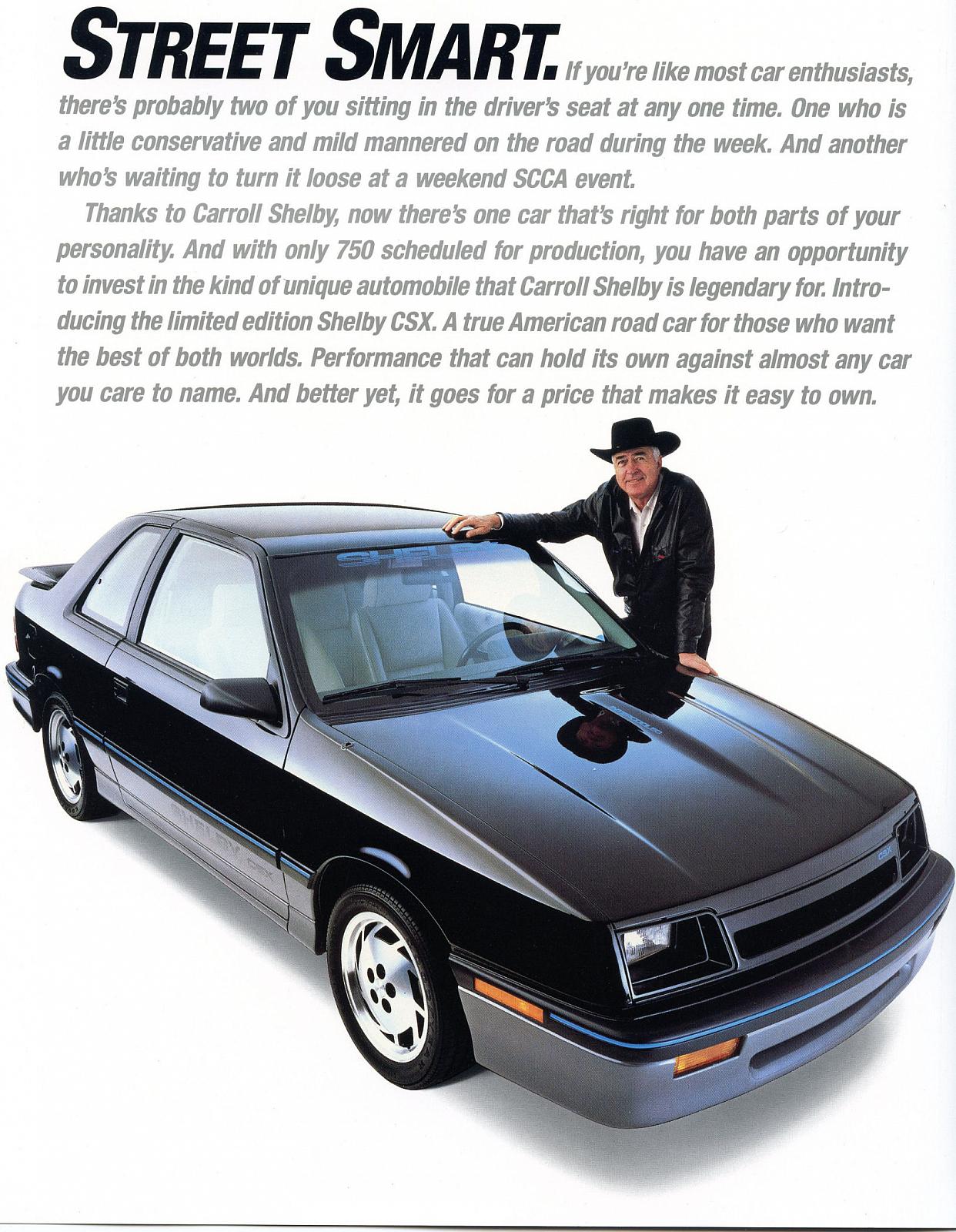 It seems like lately a lot of people are remembering that Carroll Shelby had a stint in the 1980’s making front wheel drive Dodge vehicles go way faster than they were ever supposed to. You always hear about the Omni GLH (Goes Like Hell) and the GLHS (Goes Like Hell Some more!), and occasionally, people will recall the Shelby Charger and Daytona Shelby Z (because the letter Z when applied to 80’s cars made everything more awesome! Am I right?) Even FCA, Chrysler’s current ownership group, remembered that they made these cars, and recently debuted a Dart GLH in the show circuit. The one car that always gets lost in the mix of all the Shelby Turbo Mopars is the Shelby CSX, and I’m going to tell you all about it!

Most gearheads know that Carroll Shelby helped out his buddy Lee Iacocca during his tenure at Chrysler Corporation in the 80’s to try and make some of the front wheel drive cars more exciting. While the rest of the Big Three had started to crawl out of the Smog Era darkness of the late 70’s and early 80’s, they started churning out future modern classics like the 3rd generation Camaro and Firebird, the Fox-Body Mustang, and even the Grand National, Chrysler had the anemic, Omni-based Charger in the Pony Car slot of its lineup, originally saddled with a carbureted 1.7L VW-designed four, and later, a carbed 2.2L Chrysler four. These both made under 100hp, and were probably insulting to the Mopar faithful that had the ability to purchase 440 and 426 Hemi powered beasts a little more than a decade earlier.

Shelby came in and helped change all that, starting with modifying that gutless carbed 2.2, and later, aiding Chrysler in developing a non-intercooled turbocharged EFI 2.2 that made 146hp, a big bump over what the earlier cars were making. Chrysler began putting this engine, the Turbo I, in just about everything from grandma’s Town and Country wagon, to your dad’s Lancer ES sedan, to your cool older cousin’s Laser XT. Then came Shelby’s 1986 Omni GLHS, which changed the game by adding an intercooler to the 2.2, thus creating the 174hp Turbo II engine. This is THE Shelby Dodge everyone remembers, because it’s a little beast of a car! But by the time Shelby came along and made the Omni cool, the Chrysler L-Body platform, developed jointly by the French car company Simca in the 70’s to combat the original VW Golf, was getting old and outdated. 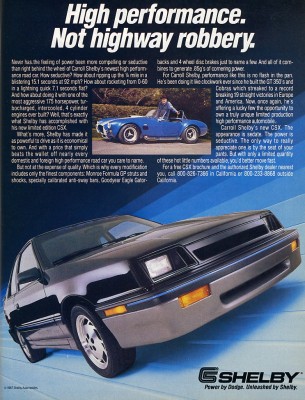 Shelby let loose a few print ads back in the day to advertise the connection of the Shelby CSX to the original CSX-chassis Cobras.

For 1987, Shelby decided to make a limited release of 750 CSX’s. All of them were based on the Turbo I/5-speed manual transmission Shadow ES two door, and shipped to the Shelby facility in Whittier, California for additional modification. So, what exactly did Shelby do to these things? First, they upgraded the engine to Turbo II status, just like the fabled GLHS had. They changed to a slightly stronger transmission, known internally as the A520. They also gave the cars rear disc brakes, performance suspension bits, special Shelby Centurion II sawblade-style wheels, a Shelby-specific two-piece high flow intake manifold, a special Shelby valve cover, steering wheel and boost gauge, a unique black and gray paint job, Shelby badging, and a CSX-only grille and body kit. The car was sold for $13,495, or just over $28,000 today. It was a hit with enthusiasts at the time, and many found their way to local and national track events. 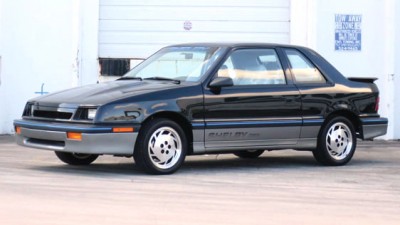 Performance in 1987 means a turbocharged and intercooled fuel injected powerplant, Goodyear Gatorbacks, and sawblade wheels. Crank up the Hair Metal and go!

In 1988, Shelby again linked up with a rental car company, Thrifty Rent-A-Car this time around, to bring an exclusive “Rent-A-Racer” to their rental locations in the form of the CSX. Only 500 of these were built, and this time, they were given a white and grey paint job. These only had the 146hp Turbo I under the hood, but that was more than enough to get people in trouble on an autocross course back then. I’ve heard many stories of people renting one for the weekend, adding a manual boost controller, and flogging them at a local event before bringing the car back like any other rental! While these were not initially sold to the public, many made it into enthusiasts’ hands after they were retired from the rental fleet. 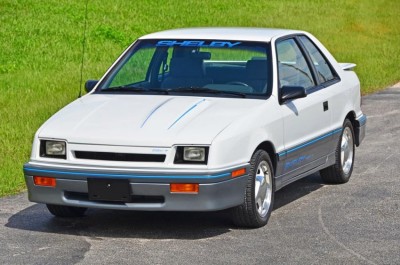 All the paint that was black in 1987 is white in 1988. They didn’t come with an intercooler, but most were upgraded to Turbo II specs once they reached enthusiasts’ hands.

The last year the CSX was offered was 1989, and big changes happened for the final year. First, The P-Body cars received a minor facelift, and so did the CSX. Maroon paint and gold graphics and wheels replaced the white/gray theme, and a new body kit was installed. Under the hood, the Turbo II returned, but with a Variable Nozzle Turbo in place of the standard ones installed in earlier cars. The engine also received forged internals for the first time. Also for the first time, some optional equipment became available for the more hardcore racing set. Recaro sport seats were available, as well as the Fiberride wheel package, an industry first. 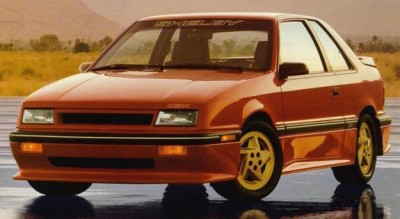 Red and gold was the theme for 1989. These had the best all around package of looks and performance of the three years the CSX was offered.

The wheels were made of a composite plastic that was stronger than contemporary aluminum wheels, and they were much lighter as well. From what I’ve heard from a former Shelby employee a few years ago at a Shelby Dodge car show, Shelby even won an industry award for pioneering the composite itself from a scientific bureau! Pretty cool stuff. 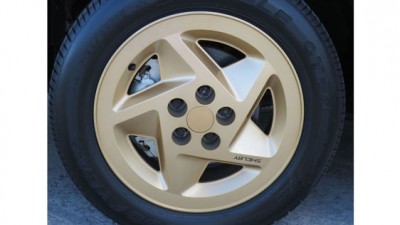 Plastic wheels? Yup, plastic wheels. Word to the wise: if you buy one of these with the Fiberride wheels and intend on autocrossing or drag racing, bolt on a different set of non-plastic wheels for performance duty. I’ve heard of these cracking and shattering during performance events, since they are made of now-old plastic. Also they are worth a good amount of money and are not being reproduced, so set them aside if you are going to beat on the car!

So, why doesn’t the CSX get the same notoriety as the earlier GLHS? It could be for a few reasons. The GLHS cars came first, so maybe everyone remembers them more than the later cars. Also, if you have ever been in an Omni, you know that they are very flimsy, generally scary cars to ride around in. The GLHS, even though it’s outclassed on paper by newer hot hatches like the Ford Fiesta and Focus ST, feels as though every stab of the pedal will kill you! The CSX was a bit more refined and modernized than the L-Body GLHS, even though it handled better and had similar power numbers. Another reason is that they get lumped in with the rest of the P-Body cars, which were mostly forgettable in pedestrian, non-turbo form. 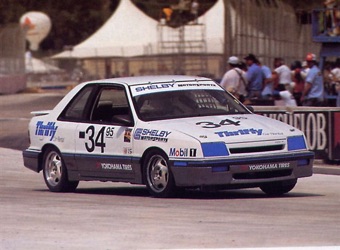 These cars did very well in local events, as well as national SCCA events. I believe this 1988 is competing in the SCCA Showroom Stock series in this shot.

The fact is, the CSX is an unsung 80’s performance car, and while it’s viewed as a footnote in the Shelby story, these cars have the potential to be serious performance machines. They can be had for extremely reasonable prices, and are cheap to maintain and modify. A non-running, restorable example can go for well under $1000, while running, presentable examples trade hands for around $3000-5000. TV auction queens that are pristine can reach the teens, but if you want cheap speed, ignore those and get a lower priced example. Shelby Dodge guys don’t covet originality as much as they covet raw performance, so modify away! So, knowing what you know now, what you you think about the CSX? Let us know in the comments below!

RideTech Street Grip: We Install It, Thrash It, And Tell You Why It's Legit Going To PRI 2015? Don't Miss Out On All This Awesome Stuff! Seminars, Events, All Here