The 2019 Easter Jeep Safari Concepts: Gladiators For Days And More For Moab! 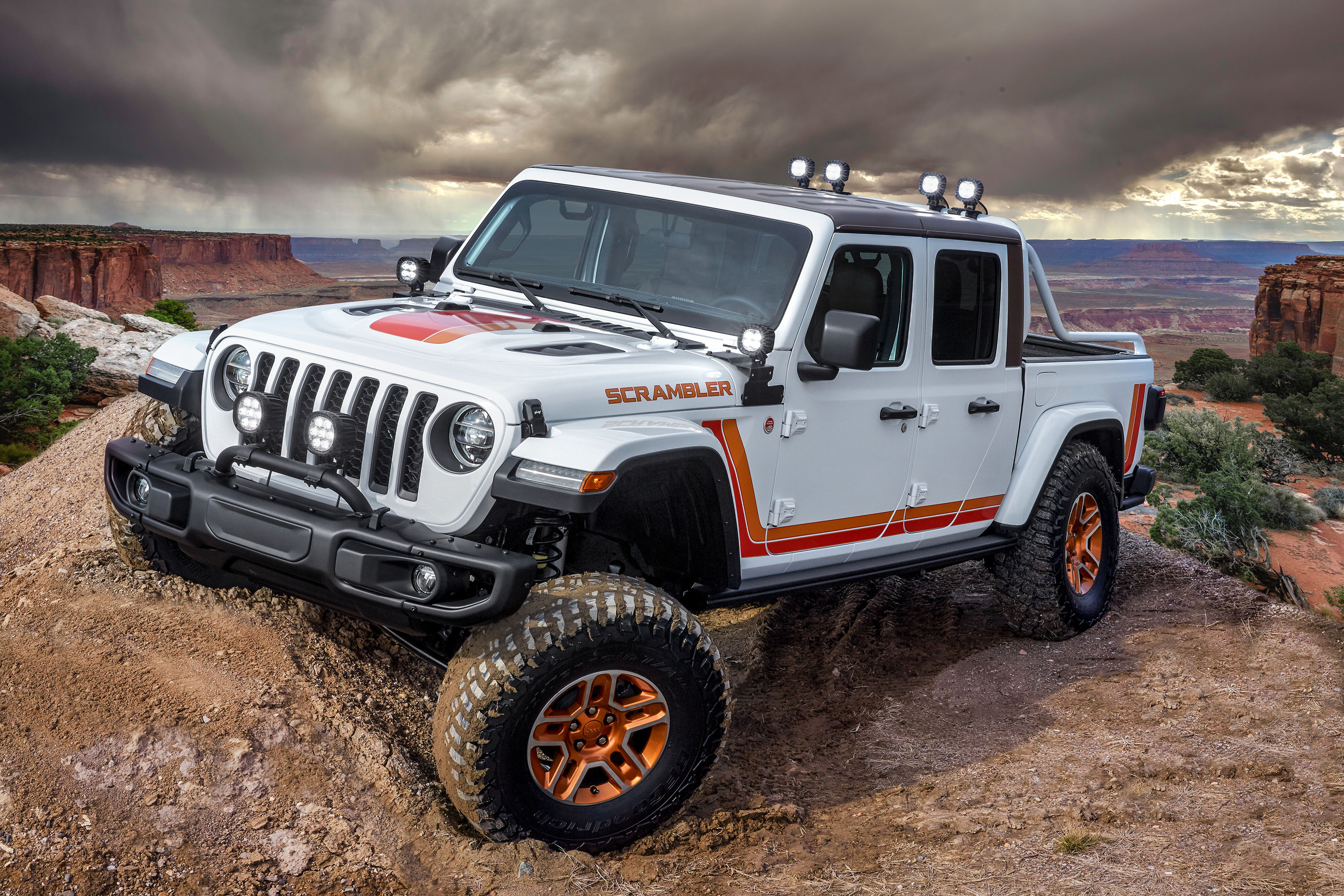 Every year, Jeep rolls out some special concept vehicles specifically for the Easter Jeep Safari that happens out in Moab, Utah. Every year, it’s a mix of what can be done to a Jeep via the aftermarket and the official parts department of Chrysler/FCA/Mopar, and what Jeep themselves should be doing in the first place, with the occasional throwback to the past loaded in for good measure. This year, it goes without saying that the new Jeep Gladiator was going to be the star of the show, and it is. Six concepts will be heading out to Utah for the Safari, which takes place April 13-21, 2019, and without further ado, here they are: 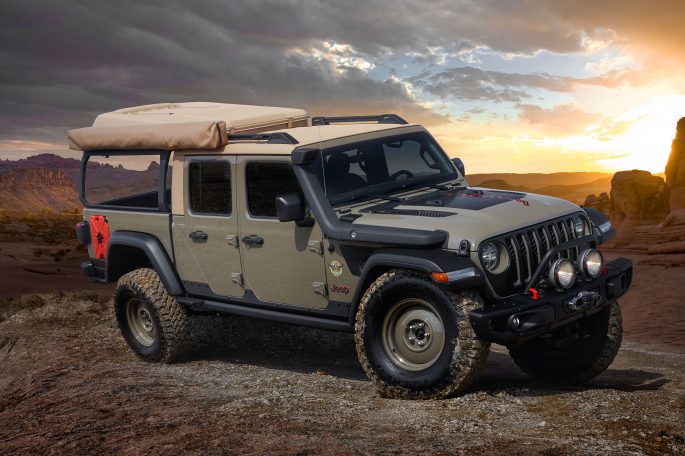 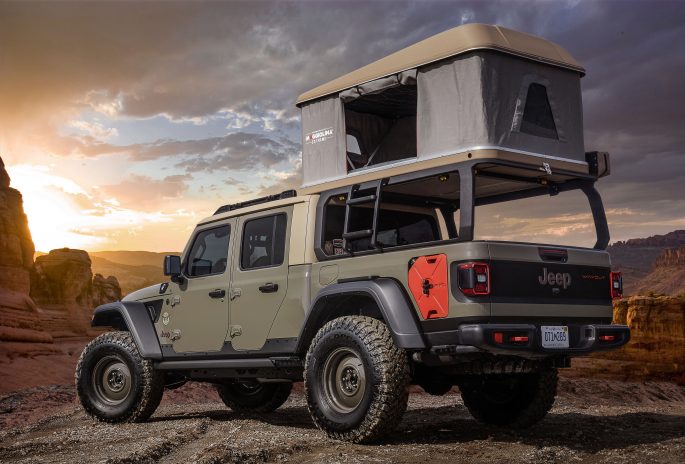 Jeeps are popular with the overlanding/camping crowd as they are a nice size, between a good off-roading trailer and a large camper pickup. The Gator Green color will be offered on the Gladiator. A Jeep Performance Parts two-inch lift kit has been fitted, along with 17″ steel wheels, a 12,000 pound Warn winch, a Jeep Performance Parts snorkel, a custom bed rack with ladder and roof-top tent, two auxillary fuel tanks molded into the bed sides, and an ARB on-board air system with a body-mounted air supply line. It’s powered by the 3.6L Pentastar V6 and the eight-speed automatic. 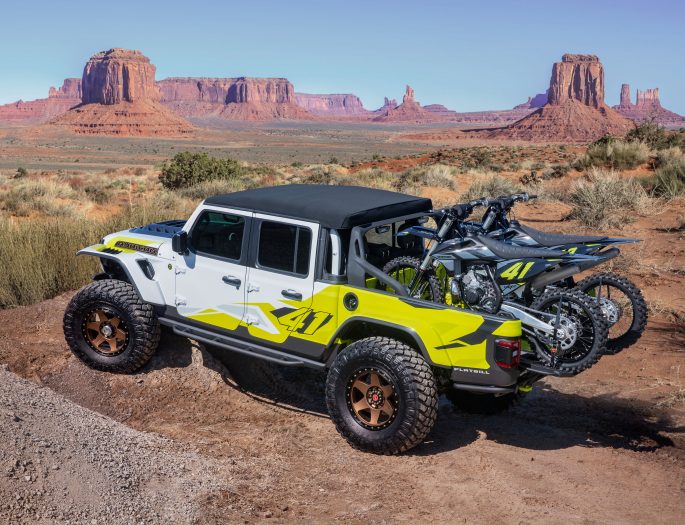 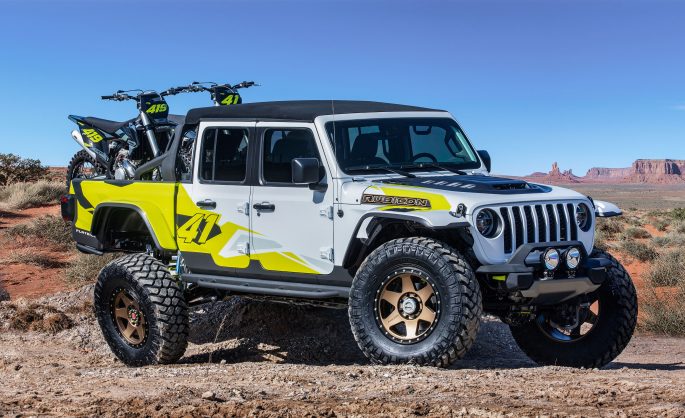 This one is for the desert dwellers that like their bikes. Dynatrac Pro-Rock 60 axles at both ends, an Off-Road Evolution four-inch lift kit, 20″ wheels and 40″ tires support a Gladiator that has plenty of body modifications (note the vented carbon hood, wheel flares, custom front bumper and skid plates). The truck bed has dedicated wheel ramps for loading and un-loading the motorcycles. The Flatbill sports a Pentastar 3.6L V6 that is equipped with a Mopar cold-air kit and the eight-speed automatic is shifting the gears. 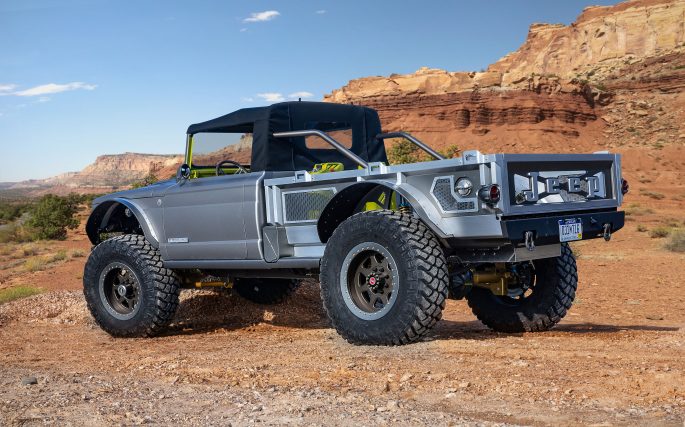 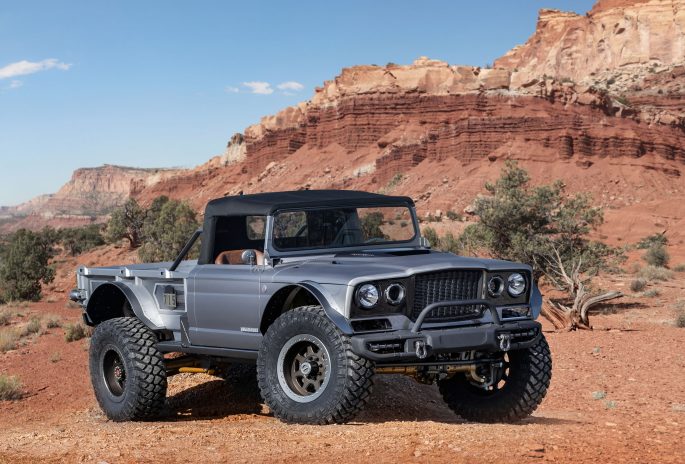 Resto-mod Kaiser Jeep? Sold. This 1968 Kaiser M-715 is sporting a full carbon-fiber front clip and a bobbed six-foot bed made out of aluminum and a 3.5″ chop to the convertible roof layout. Rock rails were added along the length of the body sides. The original frame has been reinforced, the leaf springs are gone in favor of link/coil suspensions, and the front axle has been moved forward two inches. A Dynatrac Pro-Rock 60 axle carries the front end, while a Pro-Rock 80 axle suports the rear. The 20″ wheels and 40″ tires get turned via a “Hellcrate” Hemi. 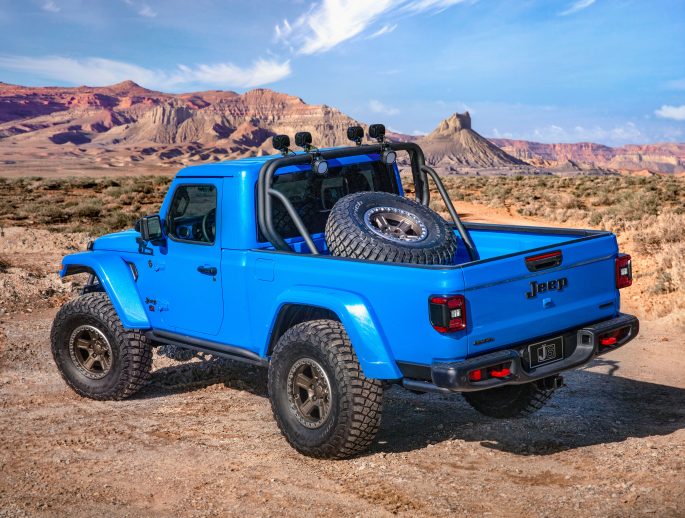 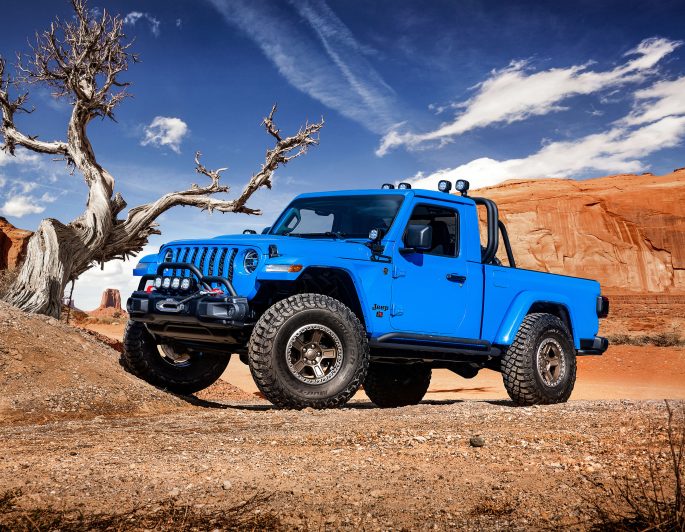 Think the Gladiator has two doors too many? Here’s your answer! The Rubicon-spec J6 sports a six-foot bed that’s a foot longer than the standard Gladiator, with a wheelbase that matches a four-door Wrangler’s (118.4 inches.) The color is Metallic Brilliant Blue, a throwback to the 1978 Honcho, and the sport bar with the Jeep Performance Parts LED lights adds to the classic feel. The wheels are 17″ prototype units on 37″ tires and the hardtop is removable for open-air off-roading. Power is provided via a Pentastar V6 with a Mopar cold-air kit. 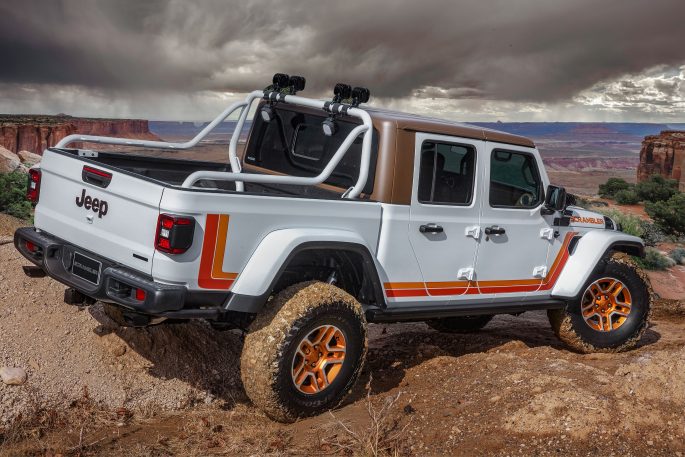 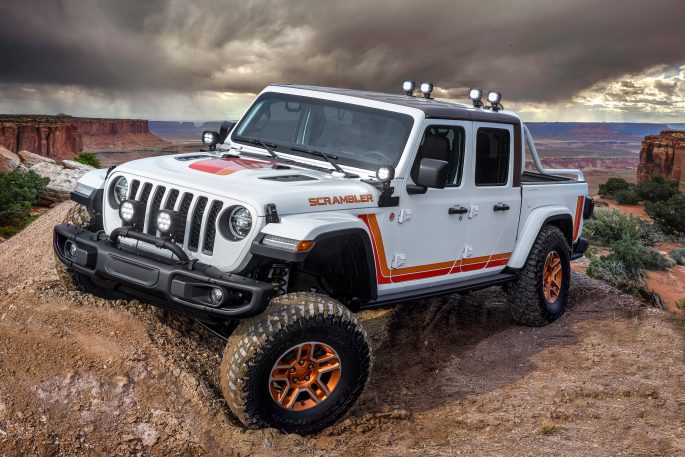 Many were convinced that the name “Scrambler” was going to be used for the new Jeep pickup, and some felt let down when the Gladiator name was used instead. Here’s the “sorry” from Jeep. The 1980s-era livery is a mix of prototype Punk’n Metallic Orange and Nacho colored stripes and the top is is painted in vintage amber. The sport bar in the bed is a prototype unit, but the ten LED auxillary lights can be had for your own rig. The wheels are 17″ Jeep Performance Parts units colored in a concept bronze color and fit thanks to the two-inch JPP lift kit. The 3.6 has a Mopar cold-air kit and a cat-back exhaust system. 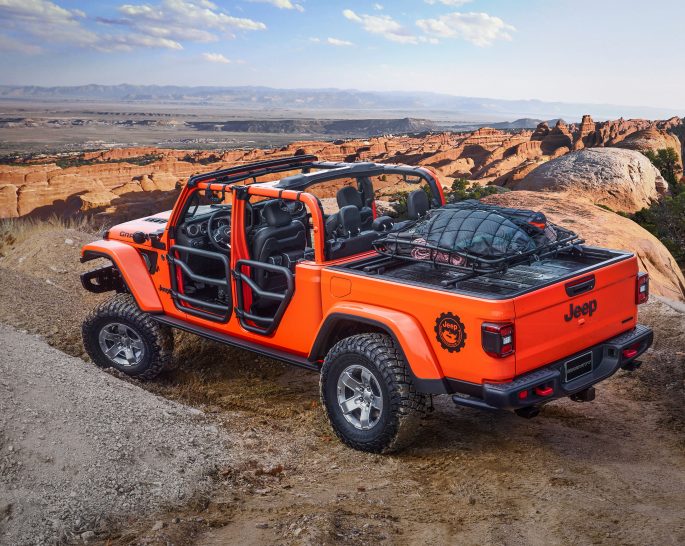 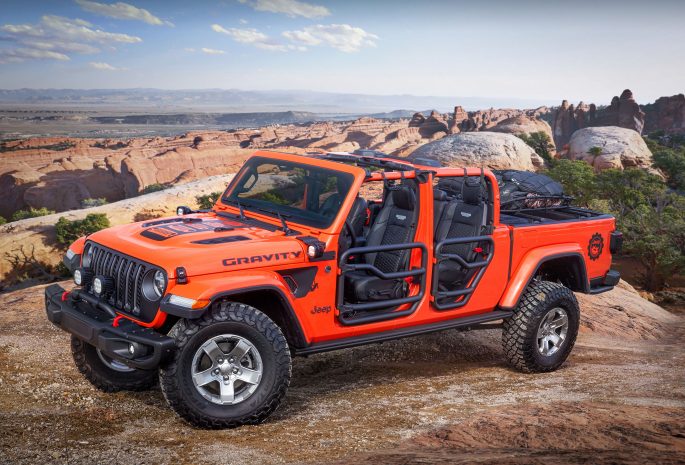 The Gravity concept is aimed at rockclimbers. Not sure why, but it is. The color is the concept Punk’n Metallic Orange, the two-inch JPP lift kit helps fit the 17″ wheels and 35″ tires, and the engine sports a Mopar cold-air kit and a cat-back exhaust. After that, it’s all about the Jeep Performance Parts catalog and how you can transform a Gladiator Rubicon into your own personal rig. The Mopar cross rails and cargo carrier basket offer storage space, the JPP two-inch round steel tube doors and mesh sunbonnet accentuate the open-air feel of the truck, and the rock rails offer up protection that will be needed for the off-roading enthusiast.

BangShift Question Of The Day: When Should A Vehicle Not Be Updated? Ride In A 1955 Chevy With A 489 BBC, A Doug Nash Five Speed, And A Mad Man At The Wheel