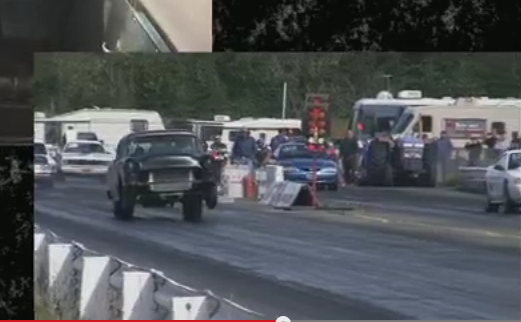 Sweet mother of mercy, this is one of the finest Parting Shift videos we have ever shown you. Filmed in Alaska back in 2012, it features a guy named Scott Granus driving his 1955 Chevy at Alaska Raceway Park and it is absolutely awesome. The car is powered by a 496ci big block Chevy, it has a Doug Nash five speed manual transmission, and a Ford 9-inch rear axle that is packed with 4.86 gears. Perhaps the thing we love more than anything else about this car is the raw simplicity of it. The video is shown in a split screen style view so you can see the shoebox headed down the track from the outside and you can also see the effort that Granus is putting in to get it there.

It is the interior view of this car that we love a lot, for obvious reasons and maybe some not so obvious. The reasons that are literally in your face include his clutch punchin’, shifter rippin’ style and the complete lack of pretense this car has. This thing is as straight ahead and simple as a tractor. I say that with a smile and a lot of love in my heart. This thing personifies the spirit that built the sport of drag racing and the cars that people became obsessed with building and emulating. Imagine being a kid that saw this thing (or something damned similar) in the early 1970s and then saving every penny you owned to build your version of it. The car is gutted, has a couple of gauges, and is exactly 0.0% concerned with its flashy looks. The cage fits well and the thing definitely works but this is not some over the top machine that is completely untouchable by the average drag racing fan. So freaking cool.

This video is like a good potato chip. There is no way to watch it just one time. Between the thing pulling the front end in second gear, sounding like it is straight from hell, and watching Granus work in the front seat, it has all the elements to be someday enshrined in the BangShifty hall of fame.