Best of 2018: The Legends Rally Ride And Drive At The Mint 400 – Thrashing RZRs In The Nevada Desert! 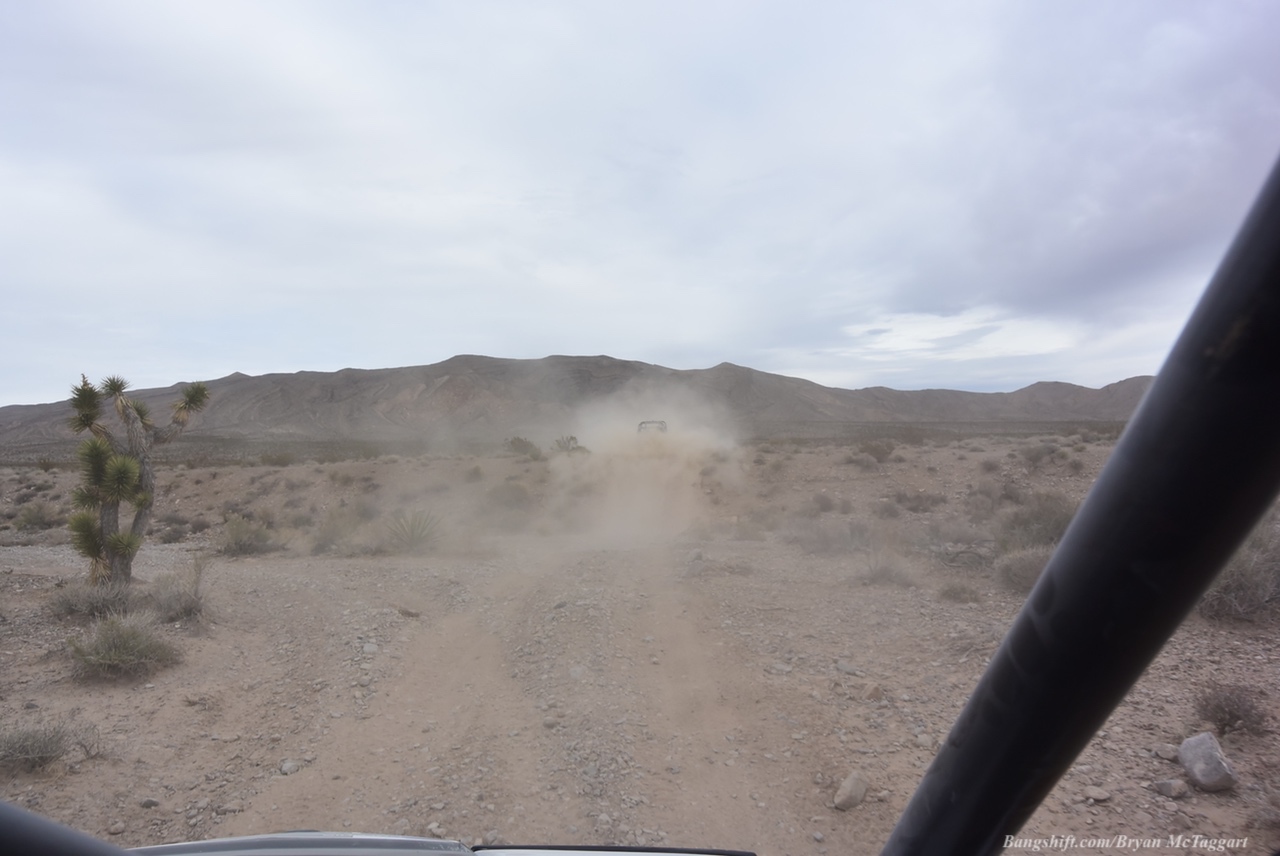 I enjoy the idea of desert racing: bombing along hard-packed dirt trails and rocky semblances of roads at speeds that would scare most people on asphalt, drifting corners and occasionally making a mockery of the laws of gravity. Suits me just fine, except for one thing: I’ve never actually done anything remotely like that. I’ve off-roaded, sure, but there we are talking about slow trails that tend to be more soft dirt and mud, with the occasional rocky precipice, log in the way or watery obstacle. And no, doing a buck-twenty on a smooth, graded gravel fire road somewhere near Gorst, Washington doesn’t count either, though it’s closer to the real thing. So when BF Goodrich sent us an invite to come out to Las Vegas to take on a UTV ride-and-drive event as part of their promotion of the Mint 400 race, I couldn’t say “yes” fast enough. I’ll be fair with you, readers: it was a purely selfish move and I enjoyed every last moment of the event. A day in someone else’s Polaris RZR, ripping up desert trails that included sections of the original 1968 Mint 400 course and a lunch at a saloon in a ghost town that dates back over a hundred years? Of course my bag was packed…there was nothing short of a meteorite landing at my house that was stopping me.

After a two-plane trip, I landed in Vegas for an evening with Phil Watson, the BF Goodrich rep who would be corralling myself and two other media types: Stephen Elmer from Off-Road.com and Steven Olsewski from Off Road Xtreme and Diesel Army. We all would be taking part in the Legends Rally, a UTV-only drive course that takes the participants on a 75-mile loop, led by a “Legend” of the Mint 400 who was not going to be running in the 2018 Mint 400…can’t get a preview of this year’s course, now can we? While customers could bring their own UTVs to the event, many would wind up renting one of the 2017 or 2018 Polaris RZR S 1000 EPSs that were at the ready, courtesy of Zero1 Desert Adventures. Or, in the case of the three media types and the man in charge of herding all of us camera-weilding cats, we’d just hop into one. 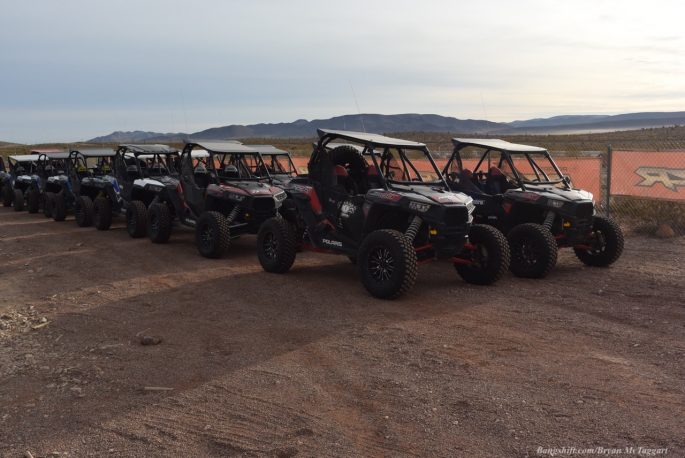 After making the drive down to Jean, Nevada early on Wednesday morning, we hopped out of Phil’s rented van and paired off, with Stephen and Phil taking one Polaris. Since Olsewski has desert racing experience and was building a Chevy Colorado to race this year before typical things happened, I had no problem riding with him…I’m ok behind the wheel, but going with someone who knows what they’re doing 100% is just that much better, especially since we’d be trading off for wheeltime along the journey. The RZRs were, for the most part, identically kitted out, with BF Goodrich Baja T/A KR2 tires on aftermarket wheels, radios, and harnesses. Keep in mind, these aren’t farm tools or toys…one of these RZRs will set you back just under eighteen grand before you start looking at additions. After a briefing to inform us on the hows and whys of the trip, we got fitted for helmets and got to our vehicles.

Now, one thing I need to point out before any of the RZRs started moving: everybody else was pretty much wearing the “cool desert weather” uniform: hoodie, jeans, boots. Except for one large white guy, who was standing there in his T-shirt and jeans, wondering at what point in the early morning hours his brain decided to fail him. It wasn’t cold, per se, but knowing that none of these RZRs had windshields and that the sun wasn’t going to make a brilliant show of it suddenly invoked a drop of confidence. Luckily, there were free T-shirts and they were black in color, so I quickly grabbed one, jammed it on and hoped it’d be enough. Luckily, it was. 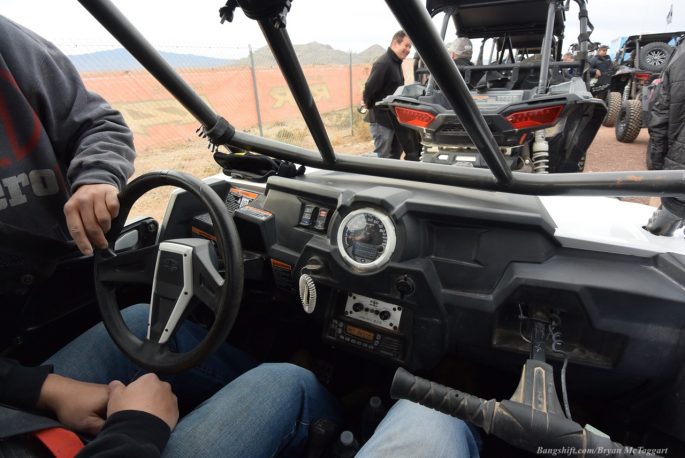 With that, we strapped in. Notice how clean it is inside of our Polaris…that shit didn’t last long. We took off out of the paddock area, crossed under Interstate 15, and started along the many rocky trails that criss-cross the hills in the very southern tip of Nevada, between Jean and the eastern border of California, on the first leg of the trip that would take us to Goodsprings, Nevada. Wet winter conditions had carved up what had been fire roads and basic scratch trails into something interesting, so we were warned to be cautious on our caravan. And that’s when the lead vehicles promptly hit the throttle and straight-up hauled ass. Olsewski was as hot on heels as he could manage, but passing was not allowed, so we maintained as best as we could…luckily, we were only a couple of vehicles back in the convoy and when the trail opened up, he went for broke. The RZR wasn’t as silky-smooth as a trophy truck is claimed to be, but at the same time it was taking a pounding from the rocky terrain without so much as a bitch or a squeak to be heard. 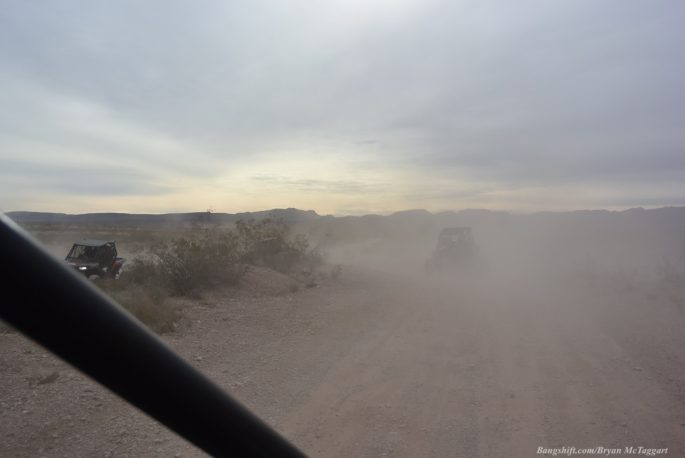 The dust, however, was something to note. Not since driving in Iraq have I been dusted like I was on this trip. Not that I wasn’t expecting it, but at points in time throughout the trip we were shifting between just regular dusty and full-on brownout conditions that forced us to slow down. Another issue that was not discussed prior to the start of the trip was what miles of riding through desert country will do to one’s bladder. By the time we reached Goodsprings the first time, everybody and their mother was lined up to use the restroom. I mean that, too. 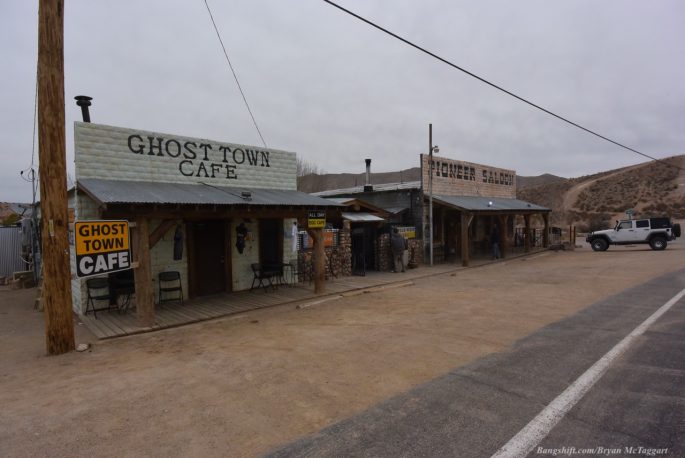 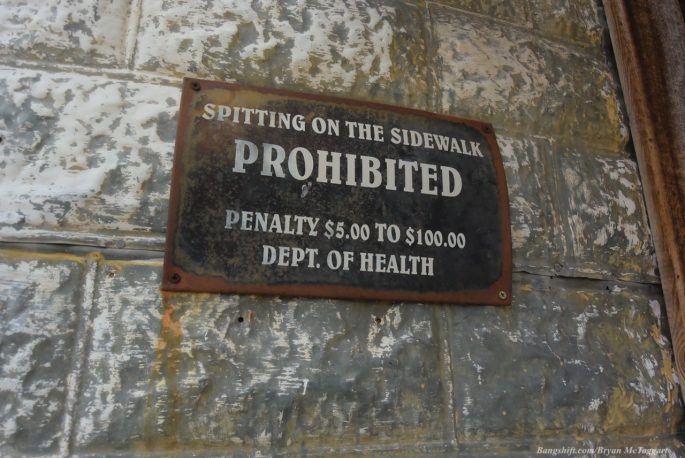 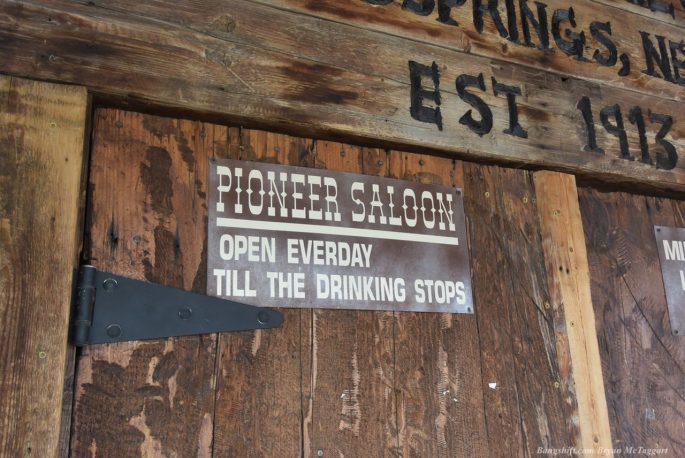 Forty miles from Vegas and ten miles from Zero1’s headquarters on normal roads is Goodsprings, Nevada, population somewhere in the 200-ish range. It is a very quiet community, which was punctuated with our 20 MPH speed limit as our guide reminded us over and over that we were not to piss off the neighbors…they already weren’t enthused about UTVs ripping through town as it was. Goodsprings was to be our focal point of the trip, as we’d be back here for a lunch break later on in the day. The one thing that really stood out about the town, once you got past the remote feel of the place, was that you could see automotive loyalties in the homes: one yard was filled with Dodge trucks, another had four late-1980s Volvos parked, another had a Toyota FJ-40 and a couple of trucks. 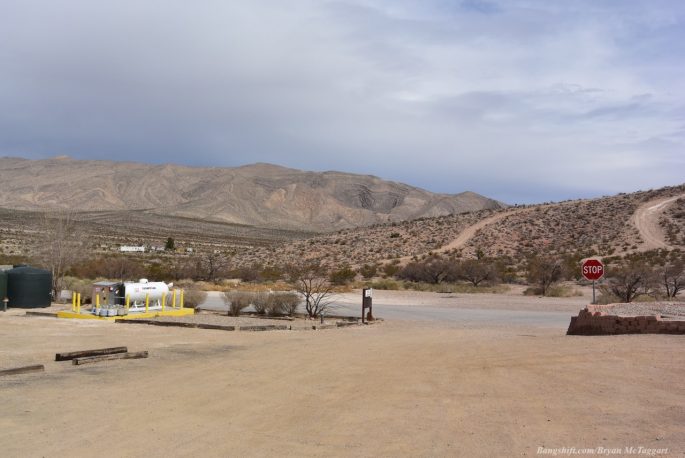 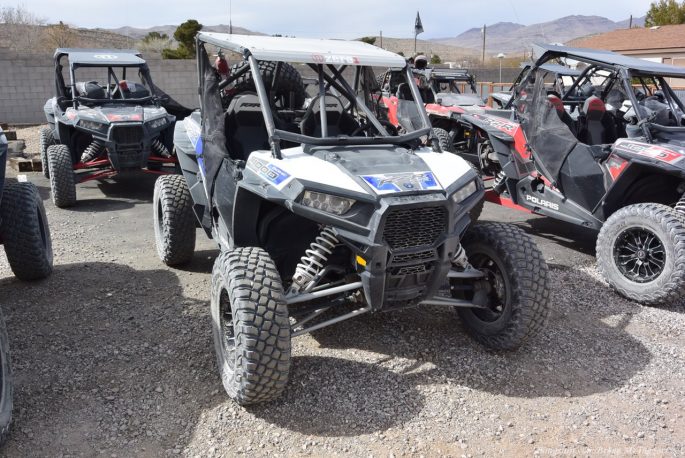 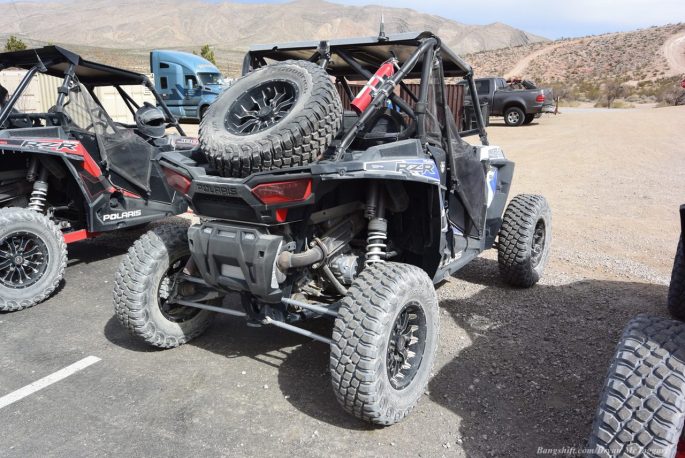 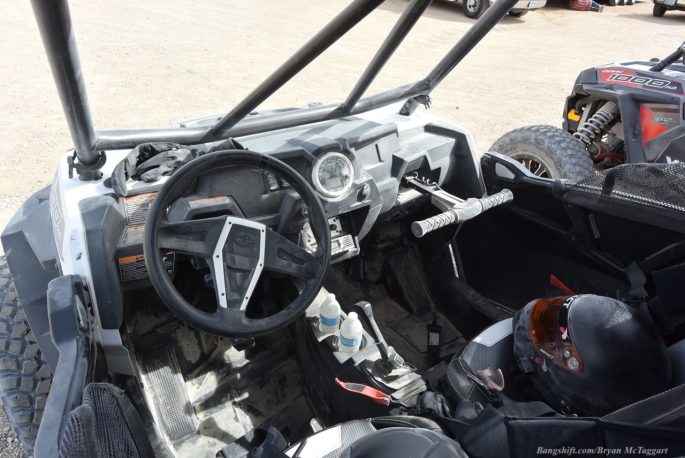 After the bathroom break, I got behind the wheel and held on for the next two sections of the trip that took us throughout the scratches in the sand between Primm, Pahrump and all over creation. We turned off of the asphalt onto Wilson Pass Road and as soon as we had cleared city limits, I stalled for a couple of seconds to open up a gap, then let the RZR eat. It dug into the dirt road like a hungry puppy, all four wheels churning up before hooking and booking. We hopped off of fire roads and onto established trails that were loaded with rocks that threatened to do major harm to the tires or the undercarraige. And I was having a blast tearing through all of it with the RZR…right up until I found the wash. I had a sizeable gap between myself and the UTV in front of me, and was moving at a good clip, right up until I saw the dip that had a right-hand kink in the middle of it. I got on the brakes and tried to pitch the RZR in as best as I could, but the front washed out on the gravel and I went in nose-first with just enough speed to scare myself. The Polaris shrugged off the impact as if it was no big deal. My left knee, on the other hand, drilled the dashboard and wasn’t going to let me forget my misjudgement anytime soon.

We continued on, scrambling up hillsides composed of gravel-covered bare rock and easing down equally steep and narrow paths. Radio traffic was kept to a minimum, but every now and then we heard about people stopping because they had to hit the creosote bushes…the bouncing and rattling had worn thin. Finally, as a group we stopped and collected our bearings before making the trip back to Coolsprings for lunch. By the time we pulled into the parking lot, I looked like well-used dust mop. 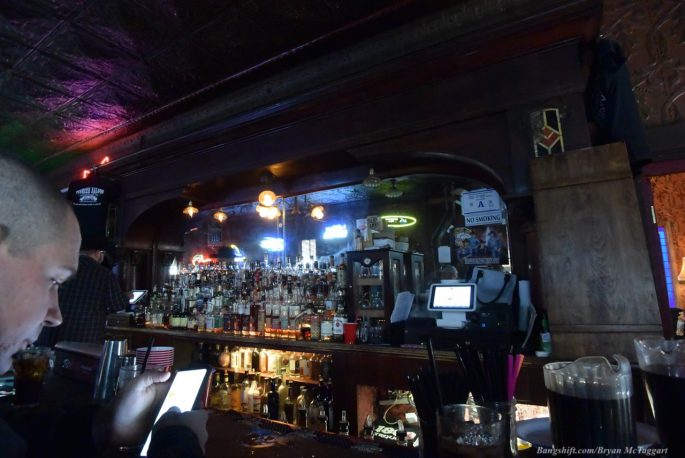 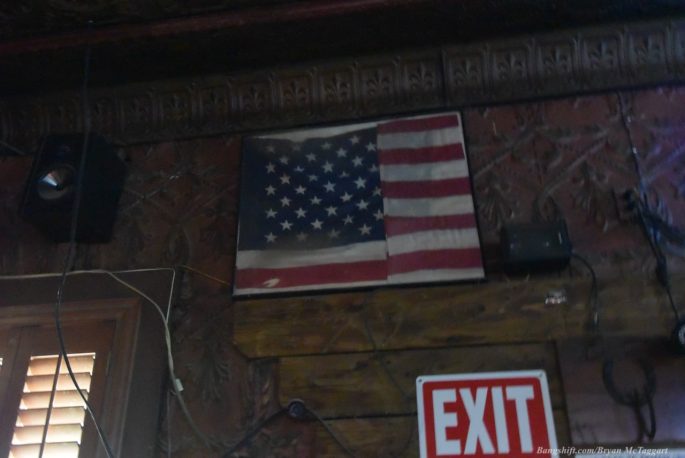 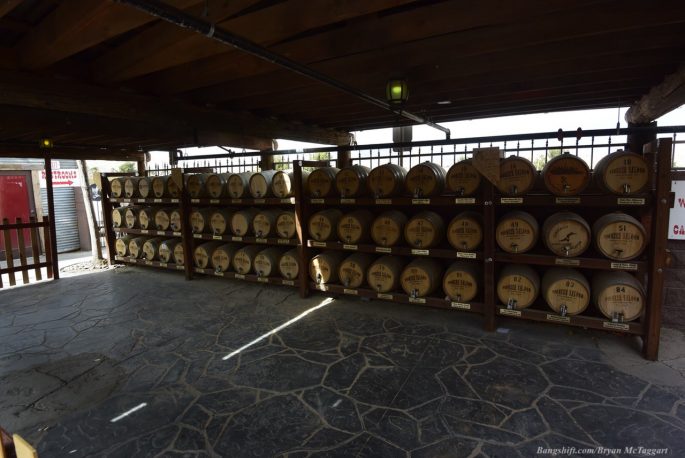 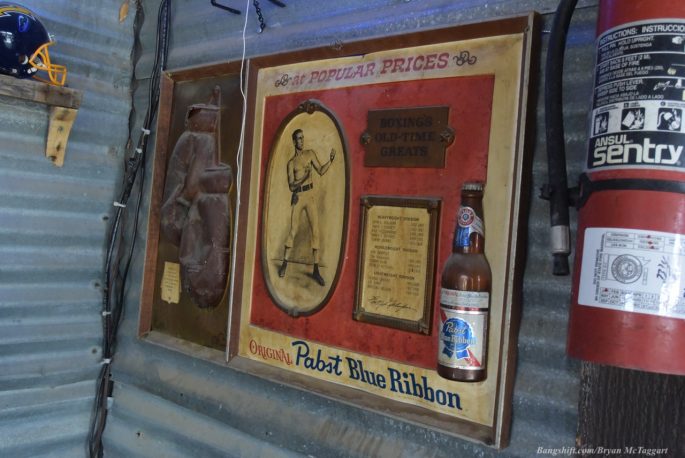 After chowing down on pulled pork sandwiches, kettle chips and Coke at the bar, I hopped back into the RZR’s passenger seat. I wanted more photos and wanted to let Olsewski cut loose…he needed the practice, as he was testing the brand new Polaris RZR XP Turbo S on Thursday. If the several inches of travel on the EPS was enough, he’d be cruising right along with the Turbo S’s twenty-something plus inches of travel…and that’s no joke, a couple were present at Zero1’s lot. And just take my words at face value along with the video: he got his practice:

I have abrasions on my shoulders where the harness straps held me down. We saw the max speed that Polaris recommends. We found the limits of suspension travel, and we were airborne at times. I might be a decent wheelman, but Olsewski can run a desert trail like a pro. I was perfectly happy laughing like an idiot when we had to stop at each turn and wait for the rest of the field to catch up so we didn’t lose them. And I won’t lie, there might have been a moment or two where I wondered just how far on the edge of safe we really were. And just like that, we were back at Zero1’s lot, shaking off dirt with every step as if we were Pigpen from the Peanuts comic. The RZRs had a date with the pressure washer for the next group and we had to get back to Vegas to clean up and prepare for the Dinner of Champions at Atomic Kitchen. Phil stopped to check out the condition of the tires on our RZR and concluded that they weren’t in the least bit harmed, regardless of the abuse that Olsewski and I hurled at them.

Outside of the Vegas metro area, Southern Nevada is a fairly desolate place. You have Pahrump, Sandy Valley and Primm, but those are towns. Goodsprings is a ghost town for all intents and purposes. But in between those points are miles upon miles of desert trails, the kinds that the Mint 400 use. At certain points, including what you see in the video, we were on the original 1968 course, following the historic tracks of the buggies, trucks and motorcycles that had gone before. The speed is addicting when you can get it, ever rock and wash will remind you that you are not invincible and that things can go south quickly, and the sand will taste the same hours after you leave the course. Hauling ass on a forest road in Washington state is one thing…what Southern Nevada offers up is an animal so completely different that there is no point in explaining it. Just follow the tire tracks ahead of you, stay out of the creosote and Joshua trees, and make sure you dodge the big rocks as you scream along the scratches that run along the hills. 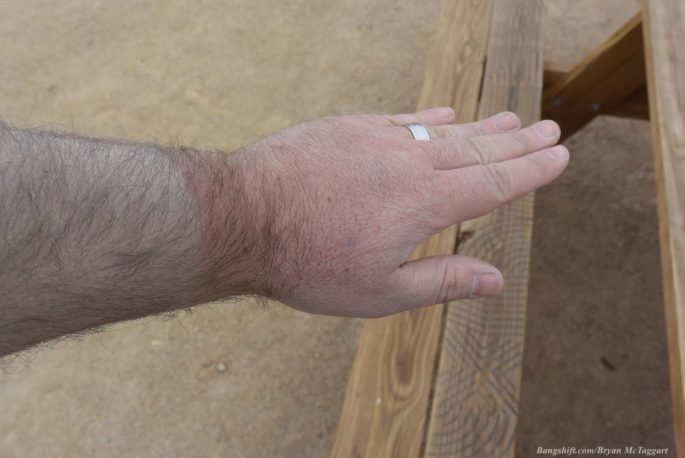 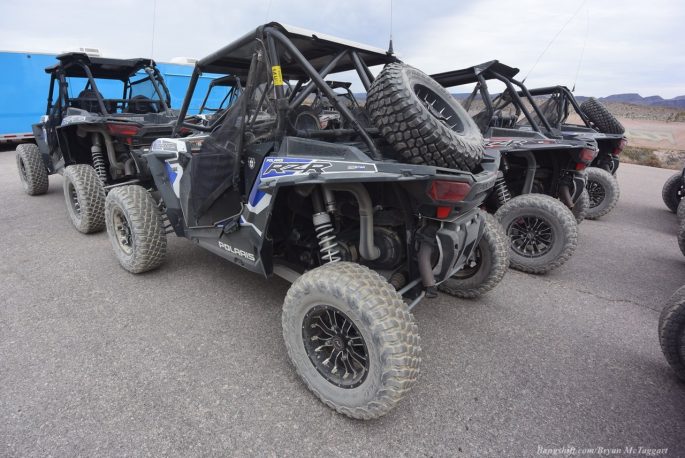 Best Of 2018: This 1964 Chevrolet Chevelle Malibu SS Ex-Stock Car Is Now Roaming The Streets! If You're Afraid Your Family Bought You The Wrong Hot Rod For Christmas, Show Them These From The Pomona Swap Meet