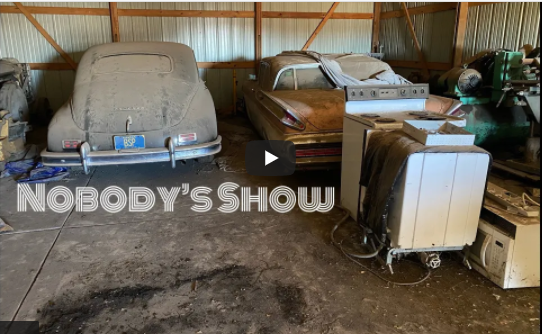 When you talk about Barn Finds, there is nobody that lives them more than Chad Ehrlich. He owns one of the coolest wrecking yards I’ve ever seen, knows more about old car models, equipment, and facts than just about anyone I’ve ever met, and he’s as passionate as they come. He buys and sells cars every single day, it’s what he does. And part of that is finding the old stuff that has been sitting in barns, garages, and under trees on property and then doing what he can to make them available for someone else to own and cherish. Keep in mind, most of these finds he’s been aware of for years before the public ever knows. This is usually because he’s been talking to the owners all that time trying to convince them to let stuff go, and sometimes that just takes time.

Here are the latest cool barn finds that have not seen the light of day in decades! Check them out.

Let’s check out a couple of cool cars that we recently came across!!!! These cars have been in storage for years! They were actually in a metal building, so they weren’t technically in a barn, but they were stored in the building with old tractors! These cars have been in here for a long time! The owner guessed they have been in here for well over 20 years and the more he thought about it, he realized they’ve probably been in here for 25-30 years! This video will show you exactly how we found them. We did get them out, but that was a job!! Only a few of the tires would take air, so they didn’t want to come out very easily! We did finally get both of them back out in the sunlight! We did get them loaded and they are back home! After we get them rinsed off, we’ll take a better look at both of them, but it is always cool to see them exactly as we found them!!! Let’s go take a look!!!

Dakar 2022 Daily Highlights: Stage 10 Had Competitors Attacking The Desert, And The Rocks, Sand, And Hills Were Fighting Back! Historic Rout: How The British Navy Trapped And All But Mangled The Italian Navy At Cape Matapan