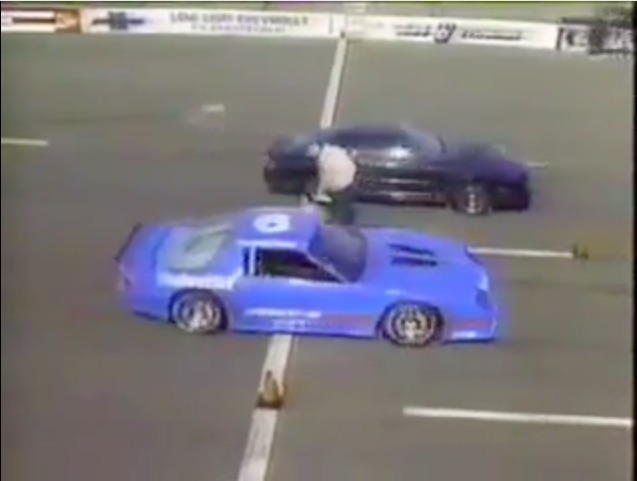 No car is more associated with the International Race of Champions series than the Chevrolet Camaro. Not the Porsche 911 RSR, not the Dodge Daytona IROC, not the Dodge Avenger, and not even the Pontiac Trans Am. The Camaro, especially the third-generation Camaro, is the car that most people tend to picture when IROC is brought up…mostly for the street car. IROC as a racing series was a bit strange…the driver’s field may have been international, but the setup and certainly the cars were not. It resembled stock-car racing using brightly-painted cars. But ask anybody about an IROC Camaro, and suddenly it’s the Eighties all over again…the good parts, anyways. Performance was climbing from the depths of despair, the shape was handsome, the suspension now did something besides support the tires, and while it certainly had it’s share of faults (see also: creaking hatches, leaky T-tops) the IROC Camaro was the flag-bearer for Chevrolet’s pony car. MotorWeek saw fit to pare off a 1989 IROC-Z against a legitimate IROC Camaro, just because. There really isn’t much of a comparison…the race car took care of every performance measure with one notable exception, and the IROC-Z was the winner for being a real car with a comfy interior and an engine that didn’t threaten grievous bodily harm at idle. It’s a fun comparison that shows the difference between a quick car and a seriously fast machine.

Scary, Spooky Skeletons: McTaggart And Conn Go On A Halloween Junkyard Crawl Caption This: One Way Or Another, You're Taking A Bath!