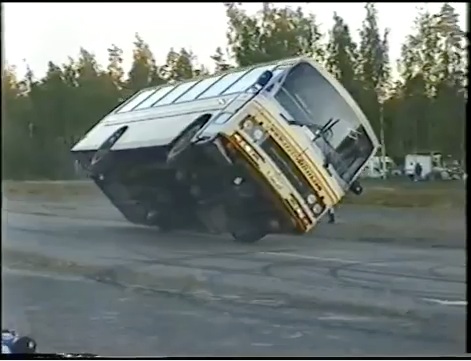 The more I study Finnish automotive culture, the more I’m convinced that there simply isn’t anything that they won’t do. This is a country that has given more top-tier rally drivers to the world than any other, a land where nobody seems bothered by anything whatsoever, where snow, ice, moose, and the occasional crash into the trees doesn’t really register on anybody’s mind. Finns do whatever the hell they want…so how off-the-wall do you have to be to get the nickname “Crazy” in a place like that?! What does it take? Apparently, you can start with an old bus (Setra, maybe?) and a ramp and two-wheel that great big brick like it’s an evening cruise. And just to make sure that your sanity will be questioned, bring passengers…they’ll love the sunset drive as you saw the wheel back and forth on the knife edge of gravity! The driver is Vesa Kivimäki, and this is his performance from the Hyvinkää Airport’s runway in 2005. This isn’t a speed run, either…Kivimäki carries just enough momentum to keep the bus happy and that’s it. How much would you have to be paid to hop on board?

Historical Video: Check Out This Chrysler Training Film From 1967! That's Not Supposed To Do That: This 13-second Ford Escort GT Is A Surprise For Anyone...Who Doesn't See That Huge Intercooler!