Deep Fix: Can This Absolutely Battered Matchbox Impala Be Restored?

Jul 14, 2019Bryan McTaggartTECH, VideosComments Off on Deep Fix: Can This Absolutely Battered Matchbox Impala Be Restored? 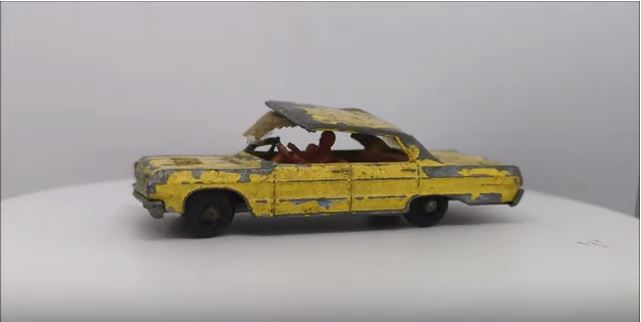 I’m pretty sure that I went through a few thousand Hot Wheels and Matchbox toy cars over my childhood. I had tons of the things…a 1955 Thunderbird with the real rubber tires, the Plymouth Fury cop car that had the crashed door section, and somewhere in my garage I still have the first one I’m certain of owning, a 1983 Corvette in silver with a red gut. So, what happened to all of these toy cars? Sadly, most were left behind for one reason or another, though some found a watery grave when my brother decided to imitate Plucky Duck from Tiny Toons Adventures by flushing half of a 1990 NASCAR collection down the toilet. Some I gave to younger kids, and some just freaking vanished. I might have twenty now to my name, including the Dodge Mirada stocker and 1980 Mustang Cobra finds I purchased at a convention last year.

Matchbox cars were the alternative to Hot Wheels for years. A Mattel brand since the 1990s, Matchbox had origins in the United Kingdom but by the late 1970s-early 1980s had moved to Macau, Hong Kong and ultimately, China. With a catalog that dated back to the 1950s, Matchbox was popular for many years until economic factors in Britain and the introduction of Hot Wheels in America soured their scene. That being said, Matchbox cars are just as commonplace and often had higher amounts of detailing than the contemporary Hot Wheel.

Restoring these old toys is a bit of a hobby. Some cars just need a simple repaint and that’s all. This four-door 1964 Impala taxicab model needs Jesus. The roof is all but gone, the paint is flaking off like a 1990s Ford’s clearcoat after decades in the sun and at first glance this doesn’t look salvageable. But watch this guy work his magic on this classic car that dates to about 1965-68…miracles can happen!