Dec 28, 2017Bryan McTaggartApex Video, BangShift APEX, HISTORIC, VideosComments Off on Best of BS 2017: When Dick Johnson Hit The Rock At Bathurst In 1980 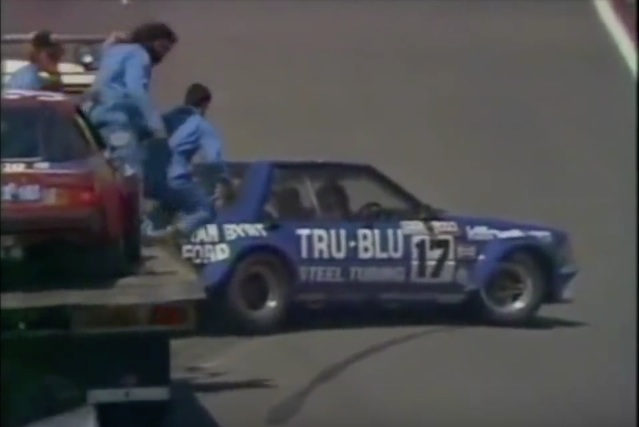 A rock defined the 1980 Bathurst race for Ford driver Dick Johnson. The day had been going so well…starting the race in second place and leading for most of the first seventeen laps, Johnson’s race had been looking pretty good, right up until he crested a hill and his Ford Falcon XD smashed headlong into a small boulder that had wound up on the track surface. The impact killed the Falcon, Johnson’s race and his confidence in the ability of the crew at Mount Panorama to keep things in order for the race, and everyone who witnessed the events could tell. At the time, Johnson was a privateer, and had only started getting his luck together in the 1980 season, so there was no doubt that he was absolutely crushed by what could easily be perceived as the act of a moronic fan. This interview wound up creating a wave of support that saw donations come pouring in, and even Ford themselves matched the donations dollar-for-dollar, plus procured a new Falcon body to build on.

But what happened, exactly, on that day?  The rock remained a mystery until 2010, a witness to the incident came forward and explained what happened: two young, certainly hungover fans had been looking for a place to lay down and gather themselves up during the race. One of the two was messing with the rock with his feet when it came loose and went rolling down the hill and onto the track. The rock’s appearance on the track was a simple accident with horrible timing. Johnson went on to have a strong career and now is involved with DJR-Team Penske, a V8 Supercars team, and still has the rock in a display case.

Best of BS 2017: This Ford Dualie Has Cummins Power To Get It Down The Road That's...Concerning: Rollover Testing A 1998 Ford Expedition With Nobody Buckled In!