How Strong Is It Really? Will This Giant Press Be Able To Smash This Steel Hammer?

Jan 03, 2021Chad ReynoldsCRASH & BURN, FUNNY STUFF, MISC, VideosComments Off on How Strong Is It Really? Will This Giant Press Be Able To Smash This Steel Hammer? 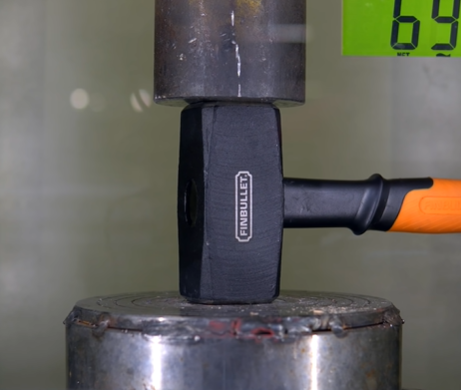 I don’t know why we have such an infatuation with seeing stuff getting smashed, but there is something cool as hell about putting something in a press and then squashing it to see what will happen. I don’t care what you want to put in the press, there is going to be something entertaining about watching it get smashed. But what about putting stuff in there that doesn’t normally smash, but rather normally does the smashing? That’s exactly what is going on in this video, as a series of hammers get put into the 150 ton hydraulic press.

The beast, the small steel sledge, is probably a 2 pounder and would normally do some serious smashing if you swing it with any kind of commitment. So what does it look like when you see it put under 150 tons of pressure? You’d be surprised. But don’t forget the entertainment factor of smashing other hammers in the press as well. And I think you’ll be surprised by how many tons some of the others can, and can’t, stand up to.

We’ve got lots of videos of stuff that has been stuffed into the press and smashed, and if you want to see them then click the link below.

How To Build Your Own Carbon Fiber Roof Part 2: Removing The Steel Roof And Installing The New Carbon Roof The Currie Garage Gang Gets To Hop A 1964 Impala Lowrider! I'm So Jealous!