The Currie Garage Gang Gets To Hop A 1964 Impala Lowrider! I’m So Jealous! 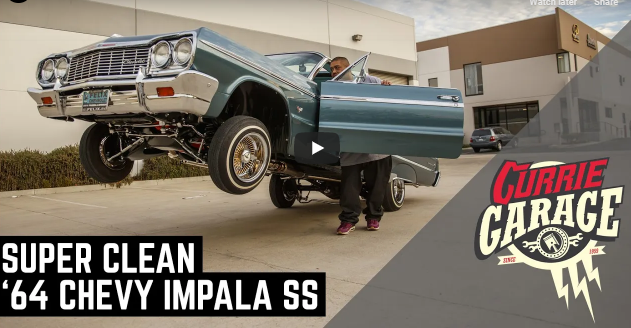 I grew up in Northern California, in an area where Latino and Chicano culture was big and their car scene was all about lowriders and bombs. I grew up as a drag racer and muscle car guy but always had a love for lowriders. I wasn’t a big fan of the bombs, but a 1964 Impala with hydraulics, 100 spoke Daytons, and panel paint with lace and gold leaf really turned my crank. I spent many hours reading Lowrider Magazine, and looking at lowriders whenever I’d see them at a show. Whether or not you were a lowrider fan directly, there was no doubt that the lowrider scene had a big impact on the hot rodding world. Lowriders were risk takers, pioneers in paint, and weren’t afraid to cut stuff up.

So when I saw that Jon from Currie Garage got to play with the MK Garage 1964 Impala, I was jealous to say the least. This car is clean, and cool, and looks like an absolute riot to play with and hop. I have always said I would someday build my own lowrider, and this video just reinforced the fact I really need to do that at some point.

Check out the video below and let us know if you’d want to drive this thing!

How Strong Is It Really? Will This Giant Press Be Able To Smash This Steel Hammer? Here's How To Build Your Own Custom Plate Bumper Without Too Many Fancy Tools

3 thoughts on “The Currie Garage Gang Gets To Hop A 1964 Impala Lowrider! I’m So Jealous!”