If You Lost Against This Turbocharged Dodge Caravan, You Missed The Warning Signs! 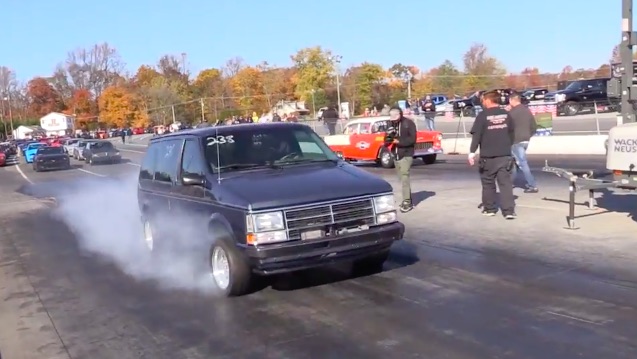 One of the best lessons I ever learned in life I learned during Army basic training. Without a question, at six-foot-three and 228 pounds, I was one of, if not the biggest soldier in training during in my platoon during that cycle, and I felt a bit cocky when we set up for the pugil sticks. (If you are unfamiliar with pugil sticks, look at a Q-tip, then make the shaft about four feet long and at each end put padding soft enough to keep the unlucky soul from having broken bones, but strong enough to transmit impact.) Unfortunately for me, I was young and dumb, and two drill sergeants, my own and one from a different company, had some kind of side bet going. When my turn came to pick up the stick, I was given the option of one of two other trainees: one was a seven-foot-one farm-boy from Iowa who looked like he carried cows for fun, and the other was a five-foot-five Puerto Rican who was smiling broadly. The big guy would beat me into the ground like a nail, no question. I decided to try out the little guy first. Big effing mistake…instead of dropping him, he turned into the human tornado and beat my ass silly.

The lesson? Never underestimate your opponent…ANY opponent. That’s not hard to do when a Camaro that’s thumping out the introduction to Van Halen’s “Hot For Teacher” out of the pipes pulls up next to you with big tires out back and nitrous venting from a nozzle. You know you’re probably screwed seven ways from Sunday, or at least will get one hell of a fight. But underestimating something like this Dodge Caravan will hurt worse, mostly because you missed all of the warning signs when you decided that you could stomp a mudhole through them no problem. You missed the turbo. You missed the five-speed transaxle. You ignored the open exhaust and the slicks. And most of all, you disregarded the fact that someone brought a minivan on slicks to the track. The only people that do that AREN’T AMATEURS!

Oh, and in case you were wondering, after I quit seeing stars from the little guy’s efforts, I went up agains the big guy too. I got two really good shots in before he had enough, turned the pugil stick into a baseball bat and knocked me the f*** out.

OBS Clash Episode 2: How The Sport Truck Became An Icon That Spawned Whole Industries How To Chop The Top On A Hot Rod: These Videos Have Us Inspired To Find Something To Cut Up!

2 thoughts on “If You Lost Against This Turbocharged Dodge Caravan, You Missed The Warning Signs!”