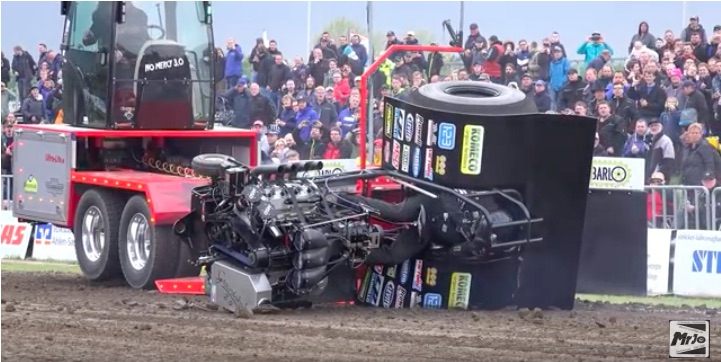 We have told you time and time again that the pulling scene in Europe is hardcore. These guys and girls love this stuff as much as anyone in the USA does and they compete just as hard. When anyone in motorsports competes hard, there will be times when things get weird. The level of weird can often depend on the type of competition vehicle. In pulling, the most volatile and touchy to drive machines are the Mini Modifieds or Mini Unlimiteds as they are called here. These things have engines that make thousands of horsepower packed into a vehicle with the wheelbase of a shopping cart.

As much as we sometimes see the big tractors get a little squirrely, these little tractors are lighter and because of their short stature they are far harder to control. In drag racing terms it is the difference between a long wheelbase dragster and a fuel altered.

In this case, the tractor known as the Groundshaker gets into a bouncing situation as the driver fights for control. As we so often see, one bounce too hard breaks the unsuspended front end and at that point, the driver is helpless but to do anything other than tuck in and pray that it all stops quick.

Watch the driver’s body and how violent this situation was. There’s good reason that these tractors have roll cages, the drivers are fully suited, and that the sled operator is so important. The sled operator shut his program down as quickly as possible but that’s a lot of weight to get stopped at speed.

Historic Video: Don Garlits' Other Blow Over Came Out Of Nowhere In Spokane, Washington Circa 1987 There Once Were Giants: This 1950s Video Showing Off The New Caterpillar D9 Shows The Beginning Of Massive Earthmovers