Retro Review: This MotorWeek Review Of The Then New 1991 GMC Syclone Is Awesome 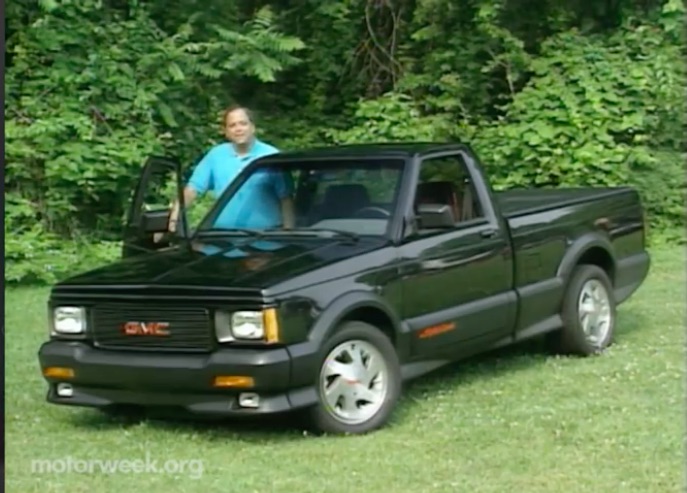 In today’s world when we hear of a company launching model with a turbocharged V6 engine, everyone shrugs. Its the way of the world these days. Turbochargers are everywhere and even lame little cars that are not marked as “performance” drivers are capable of slapping around some of the legendary hunks of Detroit iron we love here. But back in 1991 when GM announced the launch of the GMC Syclone performance pickup truck the world spun around and took notice. Why? For the time this thing was a freakshow. A small truck that was making 280hp by way of a turbocharged 4.3L V6 engine that also had all wheel drive and handling enhancements. What the hell?

As we all know, a legend was born and while the Syclone only lived for 1991 its partner in crime the Typhoon came along and delivered this same brand of awesomeness for a couple more years. The video below is a MotorWeek review of the first Syclone and to say that these guys were impressed is an understatement. Never over the top, the Motor Week crew was certainly effusive in their praise of the truck and as you will see, it performed just as GM would have wanted it.

Something capable of running 14.1 in the quarter in 1991 was a celebratory occasion and as the video briefly mentions the only thing quicker an American company made was the ZR1 Corvette at the time. We remember being kids and seeing these things occasionally on the street, wheeling around in the back seat of our parent’s car and just staring as they went by. Unicorns that we still look at with some wonder today.

Whoever had the balls to rail this project through GM during a time when they were foundering deserves some sort of medal. Watch the video below and then do what we did. Hit eBay and find one of these things to ponder buying. We want one BAD.

One thought on “Retro Review: This MotorWeek Review Of The Then New 1991 GMC Syclone Is Awesome”