Jan 22, 2016Bryan McTaggartRACING & ACTION, VideosComments Off on TaxTheRich Are Back With A Ferrari F40 GT And A Little Something Called “Farmkhana” 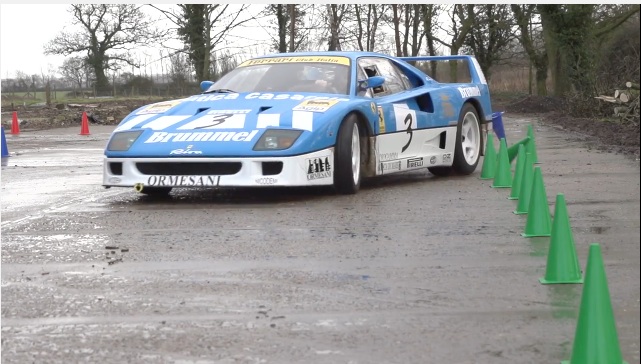 It’s been quite some time since we had seen or heard anything from the group TaxTheRich. If you remember, these are the guys who take the automotive elite and proceed to hoon the daylights out of them. From a fire burnout in a Jaguar XJ220 to a nice slide across the lawn in a Rolls Royce Wraith, these guys made light of the “it’s too expensive to do that!” mentality and earned a cult following quickly. But after their last video, which involved a Ferrari F50, a wakeboarder, and an oversized ditch in Linconshire, England, they had also earned the attention of the local cops. Whoops. Ever since November 2014, the group had gone quiet and we wondered if that had something to do with the trouble.

Fear not, because the most professional exotic car valet drivers are back and are picking right up from where they left off. The car is a Ferrari F40 GT, the sixth F40 made. This was the car that displayed at the 1987 Frankfurt Auto Show, which means that to most people who could afford to even stand next to this car, that it should be cocooned in a plastic bag, hermetically sealed and kept fresh for it’s once-a-year trips to Pebble Beach or wherever million-dollar-plus cars congregate. Unless you let these guys next to it…then it’s donuts in the dirty driveway. It’s a little tame compared to their other videos, but this symbolizes one thing…hide your Bentleys, hide your Lamborghinis. The boys are back.