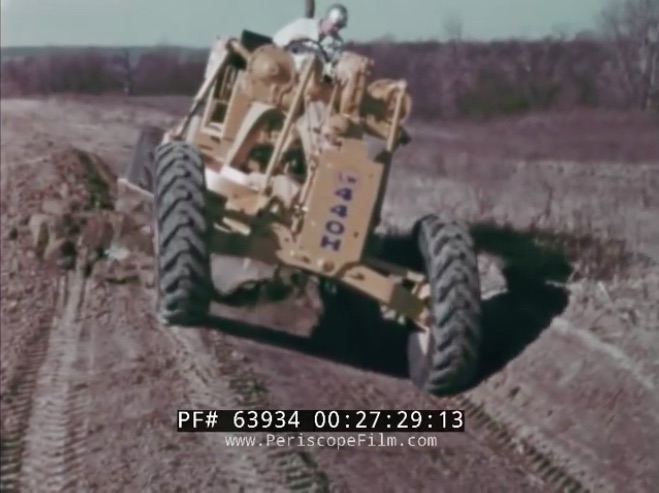 In today’s world we have YouTube to teach us everything from how to make nitromethane in a laboratory to auto mechanics. You can see people doing just about every task on God’s green Earth (not that this is necessarily a great thing) on the internet and then try to do it yourself. But what about the days before that luxury. Well, that was the era of the corporate training film and they were big business! Companies like General Motors all the way down to local mom and pop franchises for larger companies would train their employees with such films. Apparently heavy equipment manufacturers also thought that learning by video as a good way to get someone up to speed with their stuff, just ask WABCO as they made this film int he 1970s as a way to educate potential operators on the best methods for using their famed 440H motor grader.

WABCO (westinghouse air brake company) got into the equipment game hardcore in the 1950s and by the late 1950s they wanted to add a grader line to their expanding product offerings. Having bought LeTourneau in the earlier 50s they kept on with this strategy and bought an Indiana outfit known as JD Adams company of Indianapolis. These guys had been making graders since the 1880s when they were horse drawn and their major innovation was the “leaning front wheels” that are still used today on modern equipment.

Offering multiple sizes and power levels, the 440H (H for heavy duty) was among their most popular units. The one you will see in the video employs a Cummins diesel but they could be had with Detroit Diesel engines as well.

We love these old machines and we think you will love this old video! Now get to work!

Dumb Or Fun: This Guy Bought An Old 350 Powered Boss Hoss Motorcycle, Cruised And Reviewed It! A Homemade Shifter Kart And A Guy With The Guts To Wind It Out