Jun 26, 2012Brian LohnesCRASH & BURN, VideosComments Off on Watch a John Deere Pulling Tractor’s Face Get Blown Off By an Exploding Turbo 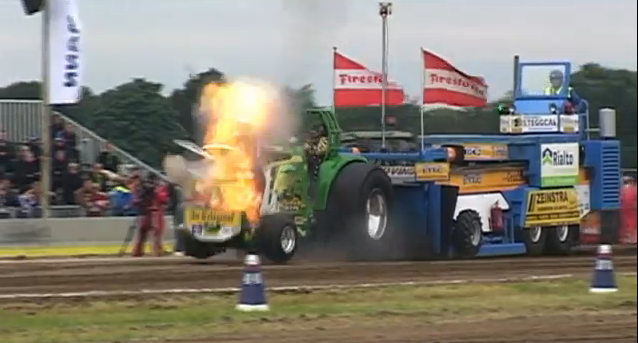 Last week we showed you a violent pulling crash from the European circuit and today we’re going to show you what type of violence happens when a turbo that is shoving better than 100lbs of boost into an engine decides to fail in catastrophic fashion. Despite the fire barfing violence that the exploding turbo has, we’re thinking that the owner/driver of this tractor was happier with the turbo failing as opposed to the engine block splitting in half as we have showed you before.

With the extreme speeds that the impeller wheels travel at inside the massive turbos used on pulling tractors, it can’t take much to piss one off bad enough that it just walks off the job as happens here. We’re not sure if the sudden escape of all that boost blows the front of the tractor apart of if flying shrapnel does it. If it is shrapnel, that sure is scary for anyone standing in close proximity to the machine as we’re guessing those pieces could cut a person to ribbons.

Press play below and watch a John Deere become a rolling pyro display!