Viper V10 in a Mustang

Dec 02, 2008Brian LohnesBangShift NewsComments Off on Viper V10 in a Mustang 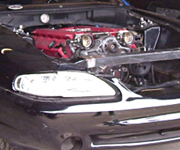 Every once in a while even we get dope-slapped with something. This Mustang is one of those somethings.

Long story short, Scott Vanderschoor of NiteMare Motorsports in Des Moines, Iowa is more than halfway to having successfully mated a Dodge Viper V-10 and T-56 six-speed transmission into an SN95 Mustang.

Realizing that simply putting a stock Viper motor into a Mustang is not wacky enough, Vanderschoor told us that the motor will have a twin-turbo setup on it when completed. As is to be expected, major changes were made to the firewall to create enough room for the lengthy 10-cylinder powerplant. Eight and a half inches of the motor actually sit inside the car and the mill sits 3 inches lower than the stock Ford small-block that was formerly in the car.

All of this is to create a car that will be a multi-purpose, pump gas burning terror. Scott is going to bolt in an IRS from a 2004 Cobra (we winced too), but realizes that he’s living on borrowed time with that piece. A narrowed (and bombproofed) 8.8 third member will eventually find its way under the car.

The full story and lots of pics are here.

Book Review: Against Death and Time Freiburger's Pic of the Week: The King in Action