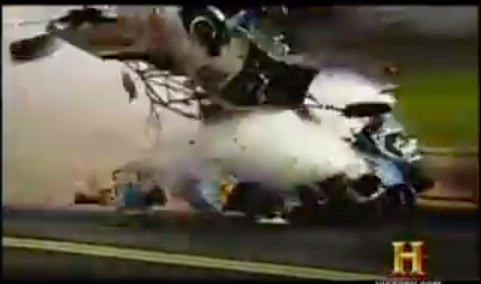 I was 25 years old and in the middle of my first visit to the Texas Motorplex this weekend 14 years ago. As you read this I will be back there, this time as part of the NHRA on FOX crew. In 2005 I was there for other reasons, working for internet drag racing magazine CompetitionPlus.com as a reporter and loving just about every second of it. There were a few things that happened over the course of the race 14 years ago that I remember. Jay Payne nearly became the first pro mod racer in North America to make a five second run in competition, I ran into Chad and his dad in the pits who were at the race hanging out, and later on Bruce Allen and Kenny Koretsky had the most infamous non-lethal crash in NHRA history.

I have had some stunning moments at race tracks in the last couple decades but none of them had anything on the moment that these cars came together in the manner that they did. I was in my seat in the press room which faces directly down the track and saw the whole thing happen from behind. The instantaneous nature of the wreck was so shocking virtually all of us in the room “saw” something different. Kenny’s PR guy at the time Joe Sherk was up and gone almost immediately and the rest of us just sat there sickened, listening to Bob Frey and Alan Reinhart walk the crowd through what happened and what was happening as every Safety Safari worker and vehicle descended onto the debris field, which was huge.

Injury wise, Koretsky got the worst of it with some busted bones, lots of deep contusions, and a general case of being banged the hell up. Allen, despite the fact he took the insane, tumbling ride through the air came away with some scraped hands and very minor stuff. For the record, Koretsky was able to get out of his own car under his own power. Allen also got out but his was more tough because he was upside down.

If memory serves correctly, all of the remaining pro stock cars and drivers pulled out of the lanes and headed for the pits after visiting race control as a group (mob). The night did continue amazingly. This was not the end of the show by any means. The fuel cars ran later on.

Below is a History Channel show segment on the wreck and it is pretty awesome. At nine minutes in length it includes interviews with car builder Jerry Haas, Bruce Allen, Kenny Koretsky, and Bruce Allen’s wife. They tell the story from the inside and we get to see lots of slow motion replays and different angles of a pro stock catastrophe that has no equal and we hope never does.

Bruce Allen retired immediately after the crash. He stepped away from the seat with 16 national event victories and a career that every aspiring pro stock racer would be envious of. Kenny Koretsky drove for after the wreck but it took him a while to get back in the seat and he moved himself into an ownership role and has not seen the strip for many years now as a driver. Allen is sill working at Rehr and Morrison racing engines and Koretsky continues to be a successful business man on the east coast. “Captain Chaos” is still living up to his nickname and can be found prowling the starting line at a few events a year and supporting racers like Matt Hartford in pro stock.

Press play to see the history channel segment of the wreck

Old Marshmallow Foot: The Story of A Journalist, Mickey Thompson, And Setting Records In A Mustang On The Salt Green Giant: 1972 Plymouth Fury Gran Coupe - Everybody Pile In!