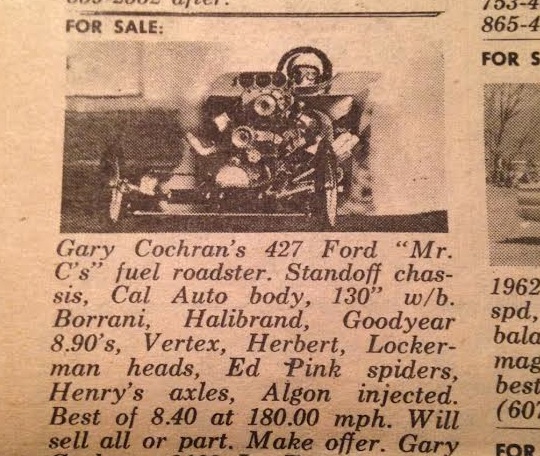 I have a pretty decent collection of old drag racing books, magazines, and newspapers. It gets bolstered every now and again by my friend Mike Williams who provides me with “treasures” when I run into him at the drags. One such care package inspired this peek into the back pages of old National Dragster drag papers from the 1967 and 1968 to see what guys were selling and how much it was selling for. The cars that are for sale tell a story about evolution and change in the sport. Looking at the prices of the car and using today as a reference point, you’ll burst into tears. Obviously, the value of a buck in 1967/1968 is different than it is today, but the prices still make us smile.

Here we begin with a pretty awesome ad for a package deal we’d die to have today. A fully worked 1963 426ci Max Wedge Plymouth and the Ford ramp truck used to haul it around. There’s no price listed on this one but the car is worth huge money today. The ramp truck less so, but they are in demand for nostalgia racers. 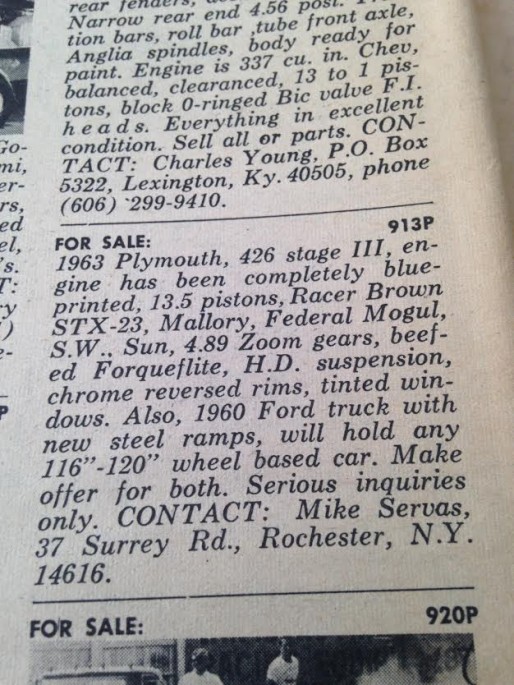 Dig this injected, Ford hi-riser powered Altered Coupe that can also run B/Dragster depending on your mood (or who showed up in that class for the weekend). We love the list of parts and pieces on the car and the fact that it shows that guy were still running all different kinds of motors. An injected FE engine must have sounded wicked with lots of cam and compression through the zoomies. 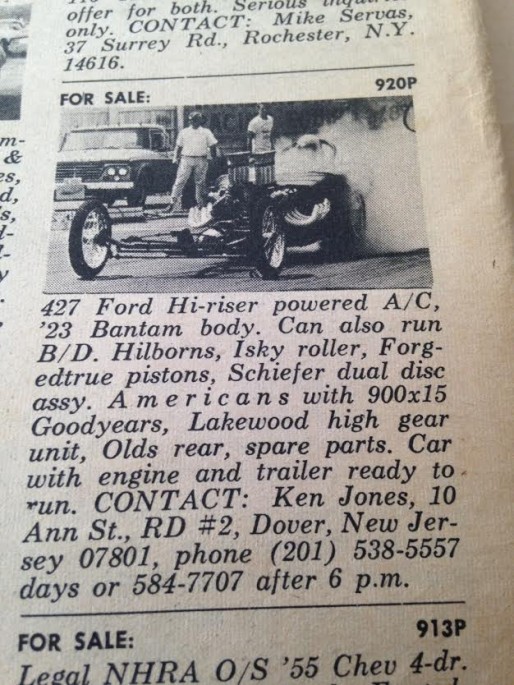 We live in an era where everyone wants to build a gasser, but the lines of what a gasser actually should be are being blurred by cars that kind of, sort of look like they should but aren’t really true to the history of the class. THIS is what a small block gasser of the era looked like and was equipped with. This car was setup to run a small block, backed by a four speed. So cool. 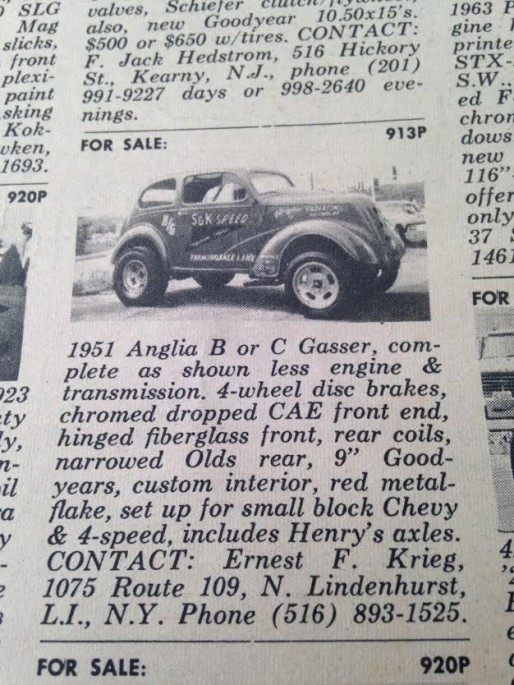 HO-LEEE CRAP. The LAST automatic Hemi Barracuda from the famed 1968 run for sale in this ad. Who has this car today? 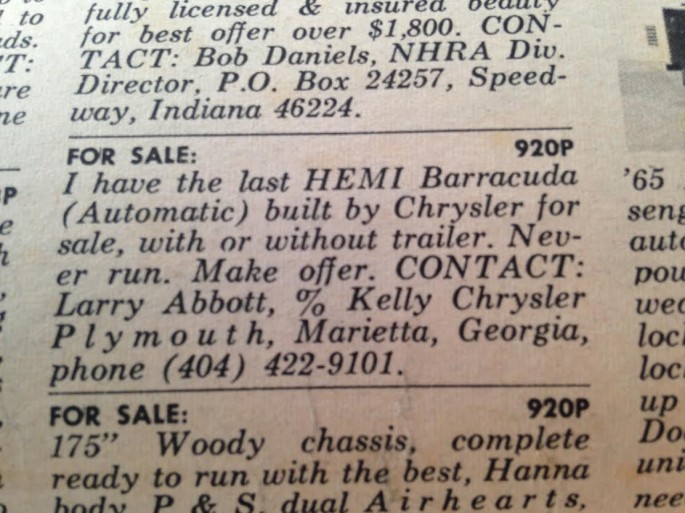 Same paper and ANOTHER Hemi Dart for sale! While that car is super interesting and cool, it is the Ford engine that is the star of the show here. Why? The thing is setup with one of the awesome and incredibly rare (even for that time) Latham axial superchargers. There were only about 100 of them built ever and they are wild looking with carbs sticking off the sides of the blower case rather than on top. Good luck ever seeing one in person. We never have. 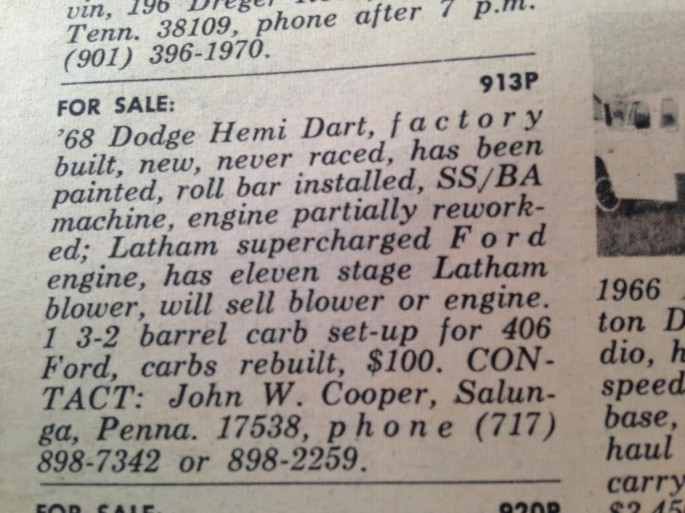 You knew we’d get to the haulers and here we are. This 1965 D200 truck has a 426 wedge, seating for six, a utility body, and air conditioning. The seller claims that this is one of six trucks Dodge built as you see it sitting here. Not a ramp truck, this mother was built to tow and we’d kill to own it today. 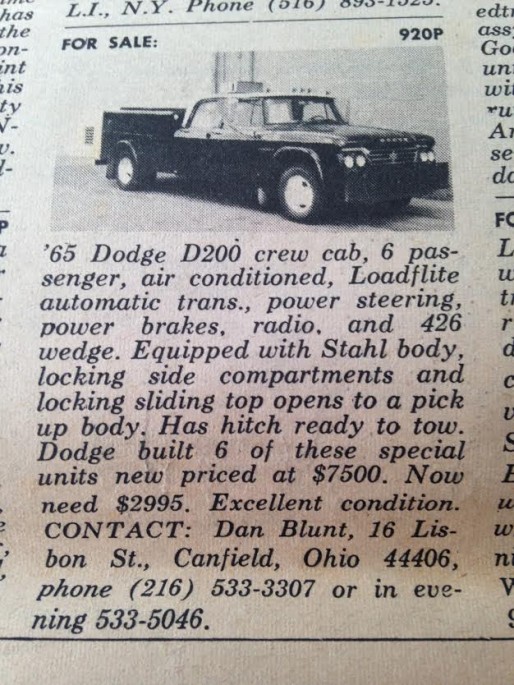 Here’s the ramp truck and it is another Dodge. This is a beefier D-400 truck which also has the four door cab. The seller lists it as a V8 so we’re not sure if it is a 426 wedge or maybe the 361ci engine that was more common in trucks and stuff. A four speed manual transmission and a two speed rear end meant that no hill was too steep for this rig to slug up. Sadly, the car was not part of the deal. 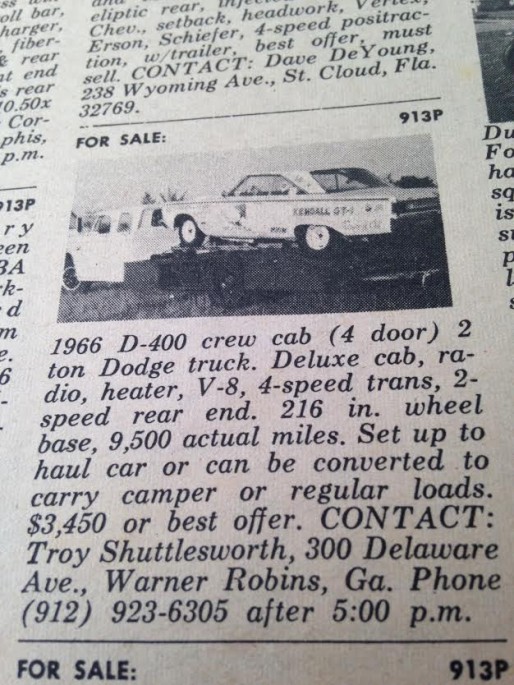 Mike Kuhl had lived and raced in California for three years when this ad was placed to sell his dragster. Undoubtedly he was selling this one because there was new pipe coming. Kuhl is a drag racing hall of famer and is one of the great mechanical minds that the sport has known. From his days racing with Steve Carbone to his most successful years with Carol Olson, he’s been everywhere and done everything. You could have bought his car for $1400! 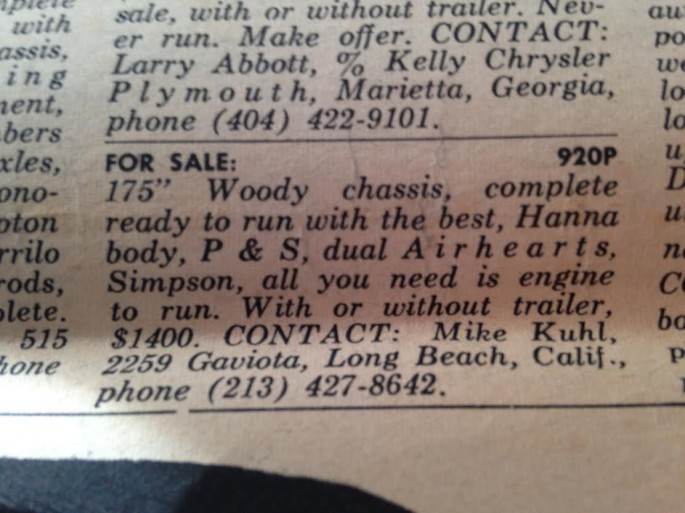 Dick Arons stands as one of the best engine builders and drivers of his era. He ran a series of Berger Chevrolet sponsored cars and later teamed up with Wally Booth and the Booth/Arons team was known from coast to coast as an operation that could hang with the best of them. The car being sold in this ad won the 1967 Super Stock Nationals which were held at Cecil County Dragway in Maryland. Those races were some of the most glorious ever for the class. 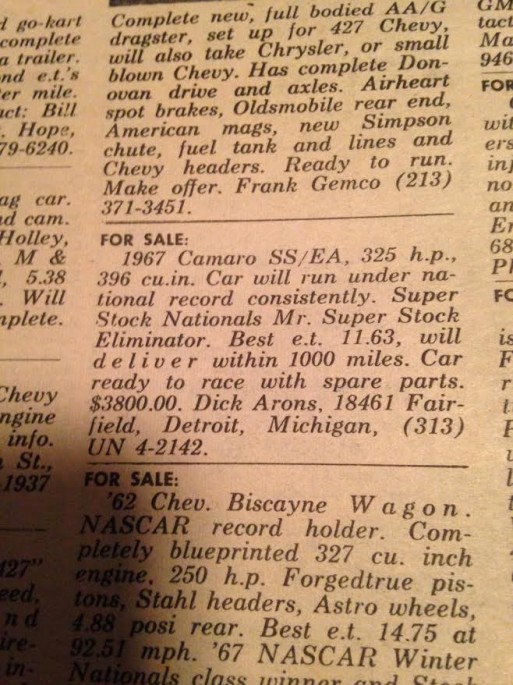 Gary Cochran had a great career and this car was one of his cooler pieces. Built by Ray Standhoff of Bellflower Automotive, the car had an injected 390 in it before going to this Howard Rapp built 427 and really picking up the pace. Call him and make an offer! 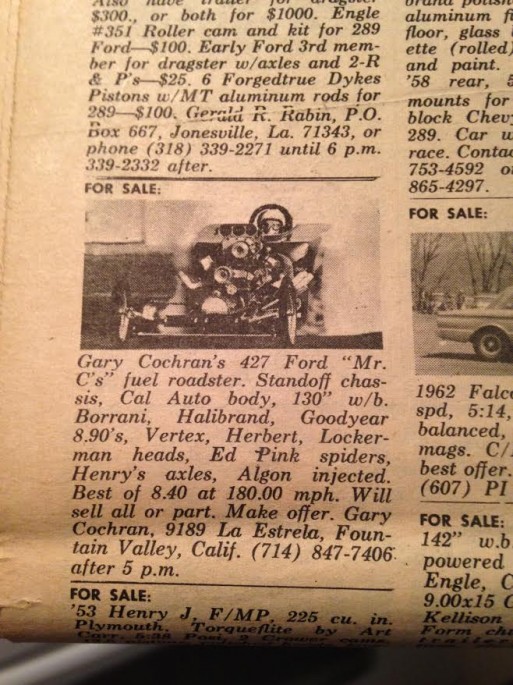 Here’s another gasser for sale and another example of what the majority of gassers were. Set up for a small block engine (a 289 Ford!) and packing good brakes, a finished interior, an aluminum firewall, and high tech coil over shocks, this thing is awesome. 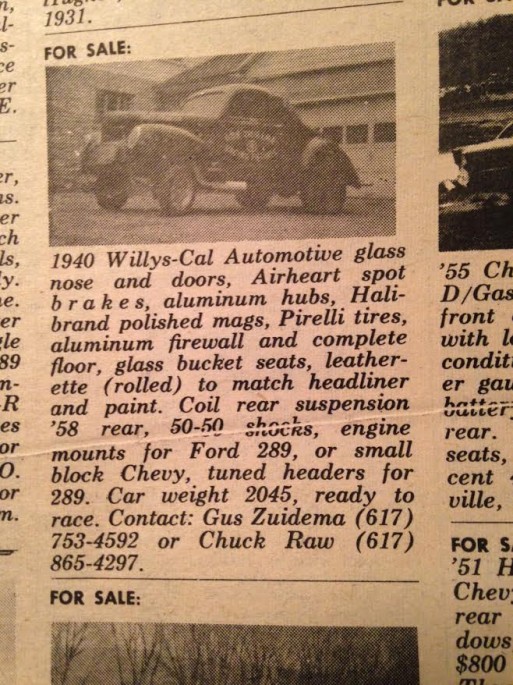 We love this ad for a AA/FD because of the strong claim that it has never been beaten in match race competition and that it has won more races at “tough Southwest Raceway” than any other car. Is this chassis still floating around somewhere? Does anyone know where it is? 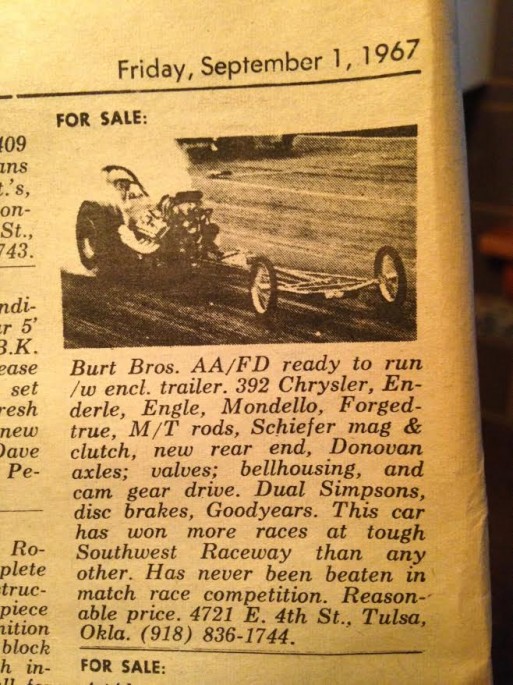 AN ORIGINAL 1962 ALUMINUM CATALINA FOR $1,395! By the time this ad was up, the Poncho was just an “old race car” and who could have predicted what it would be worth someday? Who has it now? 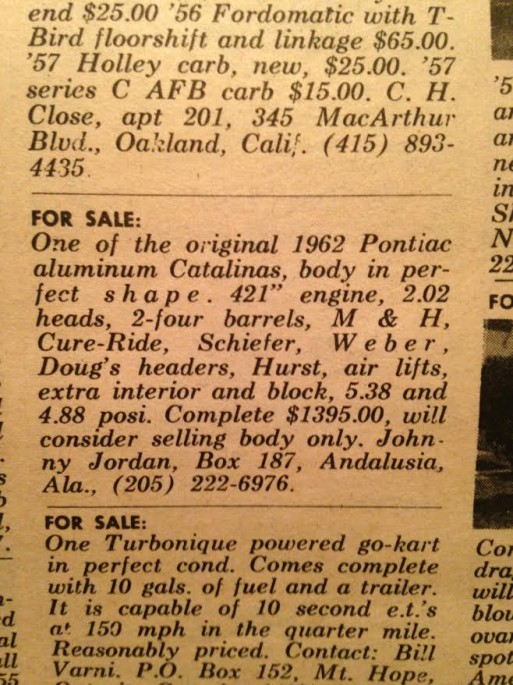 We don’t even have to add anything to this one. Turbonique powered go-kart. TURBONIQUE POWERED GO KART! The add for the largely forgotten “D” Dart below it is cool too. Dodge built a run of Darts specifically designed to attack the D-stock class. Pretty cool and really rare. 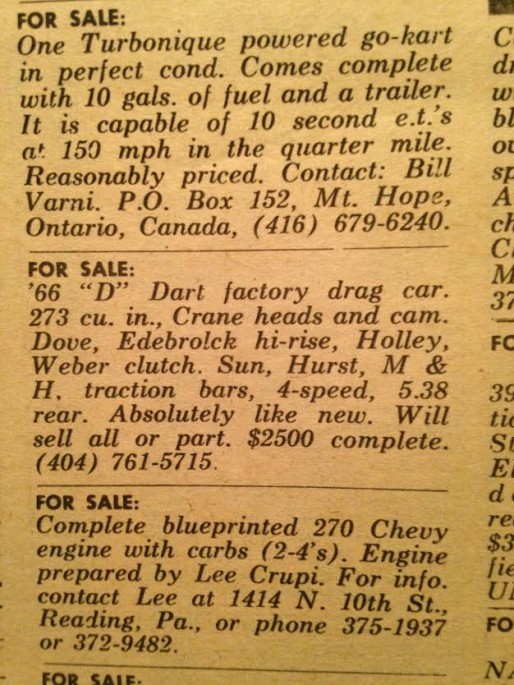 The Bad Obsession Boys Cummins Swap Their Escargot Car Hauler Project BangShift Question Of The Day: What Would You Love To See Return To Drag Racing?