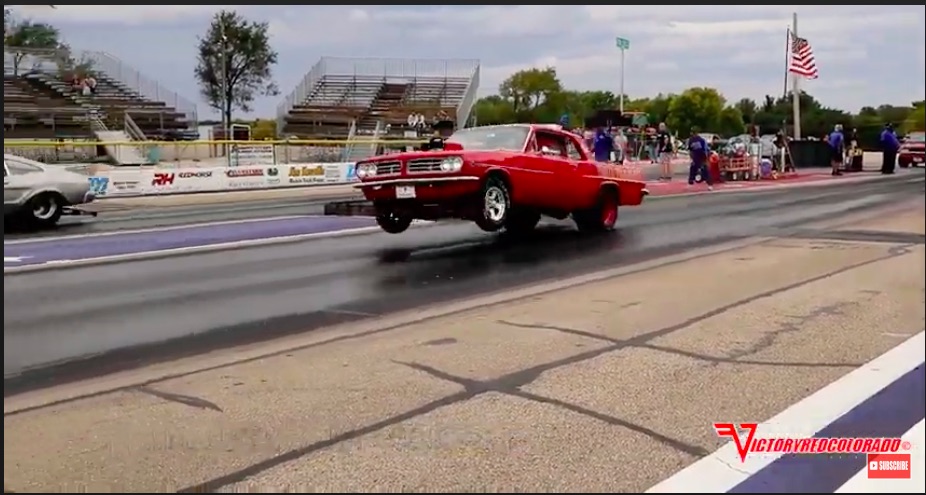 Yes, yes we know. There are easier ways to go 9s than to build a bad ass, multi-carb, tunnel ram, 482ci Pontiac V8 with a bunch of compression, and all the camshaft. There are easier ways but we’re not sure there are better ways because this car is awesome! Captured running at Byron Dragway last summer, this machine from Illinois is street legal and angry! It’s called War Party and there’s nothing about it we don’t love.

You can tell that the owner is a true lover of Pontiac stuff through many of the details and the attempts to adjust stuff but keep it looking as period Poncho as possible. Check the hood. As we all know, Pontiac actually bough the scoops they used on Super Duty cars from Ford as they were used on heavy duty trucks. This car has the mighty and high rising 482ci V8. Rather than just make any ol’ forward facing scoop, the time was taken for the detail work to get this one right. It’s not an OG Pontiac piece but a slightly overgrown version that has the right shape and contour. That’s a neat detail to us.

We love the painted steel rear wheels with the old school rim screws, and the cleanliness of this car. The fact that it is a ’63 and not a ’64 is cool as well. The ’63 cars aren’t really as proportionally nice as the 1964 LeMans but they are unique and that makes them awesome.

Press play below to see this 1963 LeMans pound down the strip in Illinois!

They're Back: JOHN FORCE RACING TO MAKE NHRA CAMPING WORLD SERIES DEBUT Not So Simple: The Restoration Of This Level From the 1870s Is An Amazing Amount Of Work