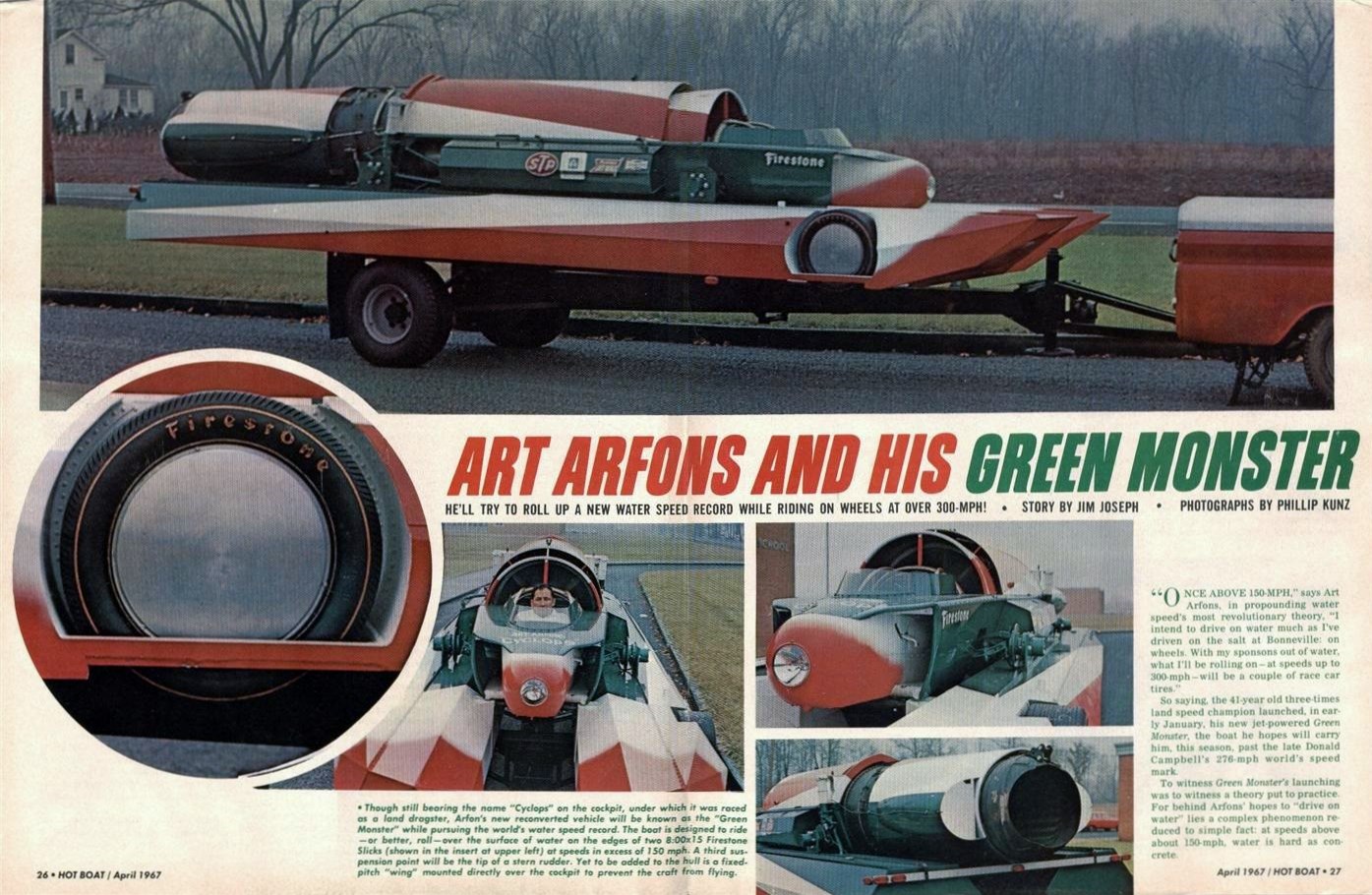 I remember the first time I saw the lead photo in this story and the thoughts that ran through my head. “Is that….wait…I think…HOLY CRAP IT IS!” Yes, you are looking at Art Arfons’ famed “Cyclops” jet car mounted on a couple of sponsons, pontoons, floats, whatever you want to call them as Art planned on breaking the water speed record with this creation…while also employing tires to “drive” across the water. We’re not kidding on that last part and we’ll get to those details in a little while but this is a creation that was built and was actually set into the water a time or two, unfortunately it never even began to sniff the 300mph zone and apparently barely even sniffed the 50 mph zone before the project was scrapped due to either lack of funding or the realization that this was a really, really wonky idea. 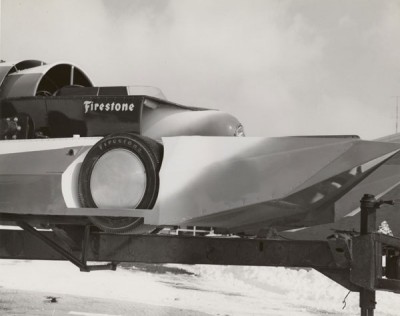 There’s one of the tires that was going to climb up on the water’s surface at 150mph and just “drive” on the surface. A wild theory for sure! Note the snow in the background of this photo. This must have been dreamed up over a long Ohio winter.

The water speed record currently stands at 317mph and that record was set by Ken Warby back in 1978. There’s a reason that you’ve not heard about a new one being set since then, a couple actually. The first is that building a craft to beat that mark is crushingly expensive and since the water speed record isn’t exactly one that people all over the globe are clamoring to throw money at and few people have the actual funding to carry such a load on their own, entries are scare. The other thing is that high speed record attempts since 1940 have a fatality rate of over 75% and as some claim, as high as 85%. The list of brave individuals who have both held the record is like a who’s who in the world of big speed. Gar Wood, Henry Seagrave, Malcolm Campbell,  and Donald Campbell, are but a few of the names that have held onto the record. On the flip side, men like Art’s nephew Craig Arfons, Donald Campbell, John Cobb, and a host of others have met a watery and violent end after their various crafts became unstable at high speeds flew, often breaking into bits after striking the water after falling out of the sky. As an example of how awful these crashes were, Donald Campbell wrecked in 1967 at speed at Coniston Water in England and his body was not found until 2001. After hearing some of this you may understand why large companies are not willing to throw money and promotional effort behind a chase for this record. Looking at it from the cold and purely business side, it is not a great investment to spend millions on something that’ll end up killing the hero behind the effort and destroying the only promotional tool available. On the human side, it just seems like a really bad idea to be trying to do this.

Now that you’ve heard that, why would Art Arfons be interested in going for a water record in 1967? The big reason was that no one had gone 300mph on water yet. Donald Campbell died trying to do it and forever preserve the British name on all things high speed, American Lee Taylor was getting close with his boat called the Hustler and Arfons perceived a simple and ingenious solution to building his own boat, which was to strap the Cyclops jet to sponsons as seen above and using it to get after the on a lake somewhere. As usual, there was the ever present missing piece to this mission that Art fought through everything he did. Money. This is where the story takes a weird turn but in his defense, it was a pretty awesome ploy to draw some cashola out of Firestone. 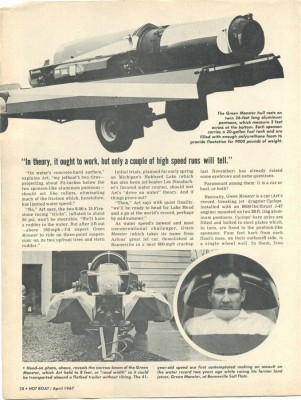 The amount of publicity this thing got before it ever touched the water was pretty incredible. In 1967, Art was only a couple years removed from his brilliant battles on the salt with Craig Breedlove so he was still a huge figure in the world of American speed. Dig the pull quote in this story, “I theory it will work…”

The play that Arfons made at Firestone was pretty much perfect although it may have been tough for him to keep a straight face to all of the media that covered the construction and promotion of this vehicle. See, Art added a pair of big Firestone racing slicks to his sponsons. They sat a couple inches down in the water and what he told every reporter that would listen is that at 150mph, the “boat” would ride up on the tires and the tires would actually be rolling across the surface of the water, lifting the sponsons out, reducing the drag on the boat and the whole thing would have only the two tires and a rudder in the water which would be used to steer. By this logic, the big J47 would have far less trouble pushing the craft to 300mph. Art is quoted in many places saying that over 150 mph the surface of the water is “like concrete” and that’s why the tires would simply climb out of the water and ride over it like a road. He even had some nice big Firestone decals on the front of the rig for all the promotional photos. Unfortunately, that money never showed up and according to some research help by Bret Kepner and Franklin Ratliff, one of the few times it actually hit the water and was used, spray from a passing boat swamped the engine and the whole thing was pretty much scrapped because there was no cash to pursue it. We’re thinking that may have saved Art Arfons’ life and for that we’re thankful.

Make no mistake about it, I’m not mocking or making any sort of fun of this project but merely looking at it with hindsight being 20/20 and considering all of the elements involved. The fact that the guy was willing to take his theory and put it into practice to the point of actually building the vessel and getting it into the water before figuring out that it wasn’t going to play out like he hoped says almost all that you need to know about Art Arfons. This was a man of action and like all experimenters, sometimes they won and sometimes they lost. We’re wondering if those sponsons are hanging out somewhere in the Arfons shop. I’ve been there and can personally attest to the fact that there are cool treasures and sights to behold in that magical place on Pickle Rd. in Akron.

I am always kind of bummed that I missed this age of speed, experimentation, and excitement. Why? Before the internet and all of the other stuff we have now you’d just be a kid at home and a copy of Hot Rod or some other magazine would land at your door with this stuff inside it. Today we have refined the world into many categories and compartments. Art Arfons and guys of his ilk were among a small group that couldn’t be categorized or boxed in. Outside of his own successes and creations, imagine how many careers in engineering, racing, and technology his exploits, adventures, trials, and tribulations inspired. The “spin off” effect from guys like Arfons are important to a society like ours and I’m no so sure there are any of ’em left….certainly a lot fewer than there were 50 years ago. 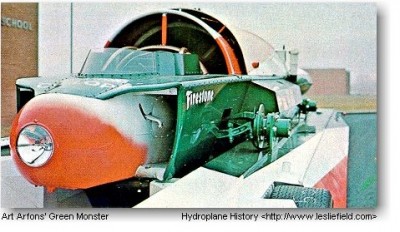 Fun fact: The school you see in the background of these photos is located almost directly across the street from the Arfons shop on Pickle Rd. in Akron, Ohio.

Note how they just used the hubs and lugs to bolt the sponsons on. Awesome. 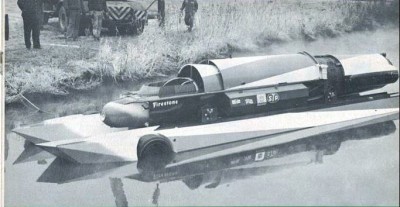 Proof that the machine did hit the water although judging by the tow truck visible in the background this may have been a tethered test just to see if the thing would float.

Question Of The Day: We Want To Hear Your "That's Too Much Car For Them!" Stories! The Smart Build: This Guy Did Everything To His Camaro RS Before Going For The Engine!