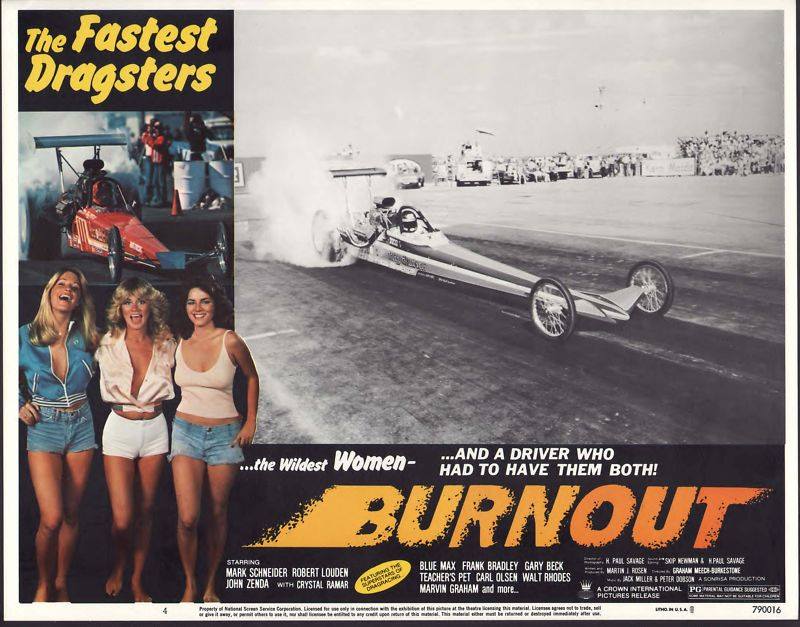 I have to sincerely thank champion NHRA top alcohol dragster crew chief Adam Rhodes for the tip to a movie that I had never heard of let alone seen. The name of the movie is Burnout and it was released in 1979. The plot is amazingly simple…in fact EVERYTHING about this movie is amazing simple. There’s a kid named Scott who is a troubled teenager (played by a guy in his 30s) and while his rich father wants him to come work for the family business, all that Scott wants to do is drag race. The father disapproves of this until the son shows him hat drag racing is all about and then he strokes a check to put the kid in business and he goes racing.

While all of that sounds like a tired storyline, at least it is acted out by people who likely earned roles on the recommendation of their parole officer.

THAT BEING SAID….THIS IS AN INCREDIBLE WATCH FOR DRAG RACING FANS

The reason that this movie rules for anyone who loves drag racing history and the reason that the whole thing is padded with incredible footage shot on great cameras at tracks like OCIR, Indy, Fontana, the Las Vegas Speedrome and others. Even more wild is that the drag racers in the move are the real guys! Walt Rhodes plays….WALT RHODES. These guys go to Donovan Engineering and lo and behold there’s Ed Donovan in the movie! The amount of racer cameos is awesome and the fact that Rhodes and the guys on his team agreed to do this because the production basically covered their fuel bill to the US Nationals is amazing.

The acting and plot suck beyond all recognition but the racing footage, the drag racers and industry people shown, all of that is awesome and well worth the watch.  You will see things that no one else has recorded footage of in drag racing history. Want an example? How about Bob Correll crashing the Kitecycle on a jump before the start of a 64 Funny Car show at Orange County International Raceway!

7 thoughts on “Epic Tuesday Time Killer: BURNOUT – This 1979 Drag Racing Movie Is So Awful It Rules”