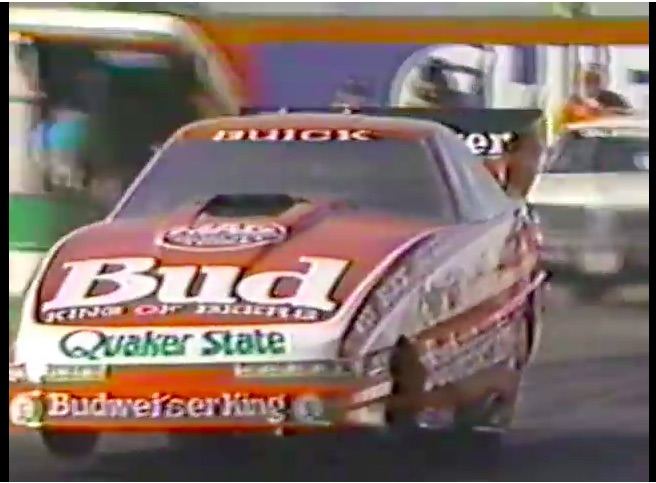 So as you are reading this, pretty much every single NHRA nitro team is descending upon what is now known as Wildhorse Pass Raceway for the 35th running of the national event there. Phoenix is also the place where most teams test before the season starts. This is a longstanding tradition and while the testing has moved around  over the years, Phoenix is where it always comes back to. Why? The track is good, the conditions are favorable, and because it is a short five hour hop to Pomona.

Today we are hopping in the time machine and heading to what was then known as Firebird Raceway for the 1988 “Superbowl of Drag Racing”. This was basically the deal the track made with the racers. For a cheap price (or maybe even free) they could test their cars but they had to run in the match race at the end of the week so the facility could sell tickets and make some money.

The event was filmed by Dean Papadeas and his Main Event Video company. Papadeas was one of the first to introduce the modern look and feel of drag racing on TV with his free-form camera work and rock and roll inspired ethos. The announcers are none other than Jon Lundberg and Don Garlits!

They call the action, sans ear protection, from a platform right next to the race track. There are some neat segments in the pits with the drivers and crew chiefs and a particularly interesting interview with Austin Coil talking about the new clutch management system he had developed. Big Daddy calls it a “four speed clutch”  which is interesting and likely his way of trying to relate what was happening to the viewers.

1988 was a super interesting year for NHRA competition and technology. I’ll be bugging you with stuff about it for the entire calendar so get used to it. As far as the world was concerned, the hunt for the first 4-second pass seriously started right here!

The Grasshopper: This Petrolicious Look At A 1962 AC Bristol And Its interesting Owner Is Cool Get Your Shift Together: American Powertrain "Be My Overdrive" Sale Is On Until Feb 28th - SAVE