Head Games: When You Are Making 2,000hp Out Of A Mechanically Injected Cummins Diesel, You Break All The Stuff 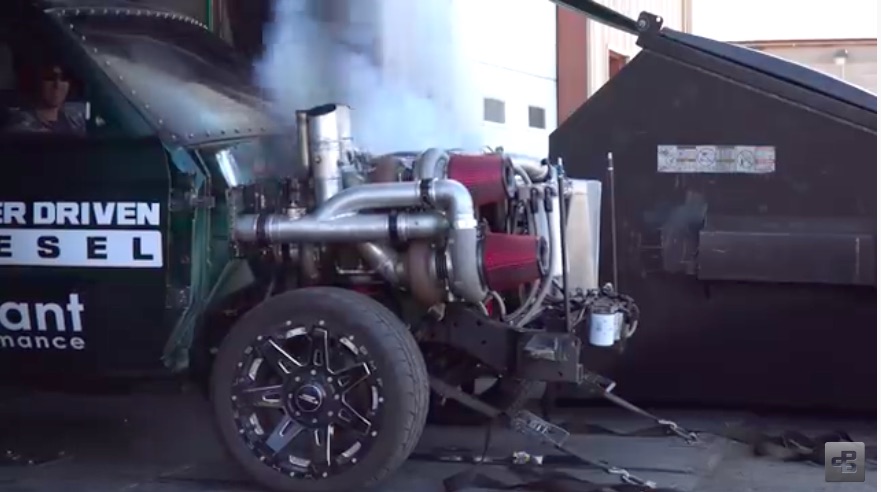 The guys at Power Driven Diesel have a cool YouTube channel and they have been documenting the build of their radical, mechanically injected Cummins drag truck and all of the associated problems along the way. This thing is gnarly and again, it is not a common rail style engine, this sucker has a monster overgrown looking P-pump setup on it and that makes it super awesome and it makes it kind of a bleeding edge deal in terms of the kind of horsepower that the thing is making. With big compounded turbochargers, nitrous to get the party started and triple digit boost, finding the weak spots in the program has become the norm for these guys.Pushing the R&D envelope can be, well, unkind at times. This is one of those times.

It was just going to be a couple of simple tuning pulls to get the truck ready for the strip (which is five hours away from the shop) and like all things that are “simple” it gets complicated. As you’ll hear, problems with the fuel system hampered their early efforts and the diagnostic process led them to a bad solenoid. To test their theory they decided to pull the sucker again and that’s when the issues crept up.

We’ll cut to the chase and tell you that the thing broke a cylinder head. If you have ever seen the head on top of a Cummins engine, you kind of understand why this is an impressive feat of destruction. These are not weak little pieces. Rather, the thing looks like you could use it to shim a sky scraper’s foundation or use it to drive piles into the ground.

Clearly the massive forces involved with cylinder pressure and lord knows whatever else, got these boys. They’ll e back. Until then, revel in their misfortune here.

One thought on “Head Games: When You Are Making 2,000hp Out Of A Mechanically Injected Cummins Diesel, You Break All The Stuff”