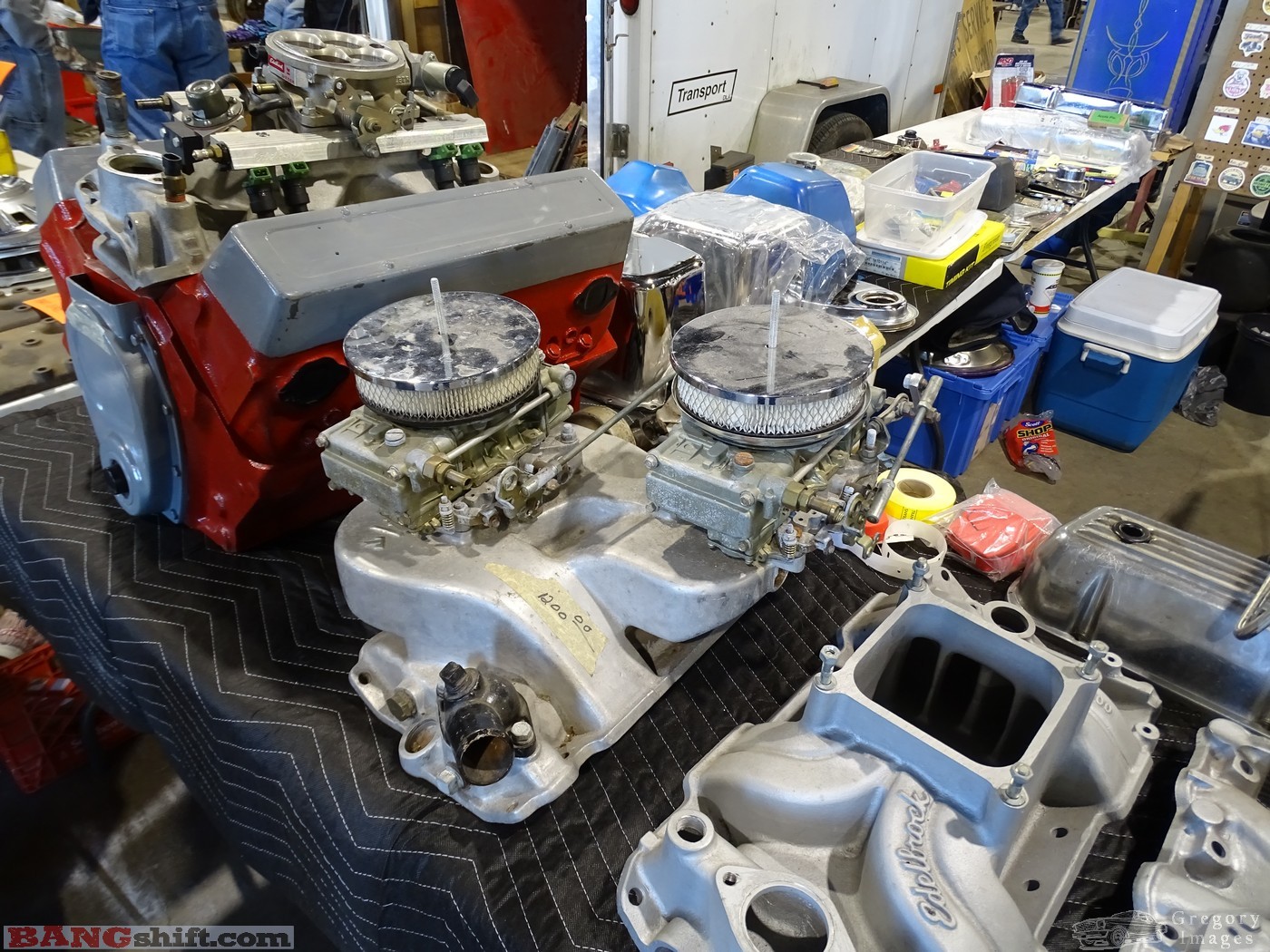 (Words and photos by Doug Gregory) – Our last gearhead adventure (prior to the covid-19 lockdown) took us to the bi-annual KYANA swap meet in Louisville at the end of February.  If we’d known this would be our last chance to see distant friends and gawk at cool stuff then we’d gone back the next day.  We did stay until after it closed that day and my feet were killing me from pounding the concrete for several hours.

I sort of set out with a plan to find a decently-priced distributor for my Chevy II.  Firewall room is not plentiful and the HEI in there now is a real estate hog.  There were lots of units available.  The affordable ones didn’t look all that good and the ones that did look good were just a tick off the new price.  I balked on all of them and left without snagging one.  I don’t haggle much and it’s likely if I had there’d been a deal made.  My son more than made up for my lack of striking a bargain and since he left his wallet at home…I picked up his tab.  I’m the dad so…  I did snag old magazines which I’d gone all last year without adding to my horde.  I’ll pickup most anything interesting, but I am focused right now on filling holes in my 1960s and 70s HotRod stash.  Decent 50s are pricey and though I have a couple handfuls, doing a complete collection of them is mostly unrealistic.  I read all of them.  I’ll take photos of some of the interesting pages and share on social media.  It’s a library of information I can hold in my hands that sadly is no longer a big part of the medium.

Our photos start with the walk up to the facility.  The parking lot was packed and it’s no wonder.  Prior to 2018 the three first events of the year were the Cincinnati Autorama, then the Carl Casper Car Show, and then the KYANA swap meet.  (The Indy Autorama is in there too, but we haven’t made it there).  With Carl Casper’s event no longer running it’s a long dry spell so the swap meet has had tons of foot traffic since.

I took photos of what caught my eye or seemed interesting.  The bucket of braided lines was stuffed with nitrous goodies including a port fogger setup.  I was looking for ignition stuff and you can see there was plenty of it to check out.  Most of the bicycles we saw were actually reasonably priced for a change.  Maybe the craze is waning.  There’s a photo of an odd, green thing laying on the floor next to an electric fan.  I hadn’t seen one of these in many years and at this event I saw at least 3.  It’s a tripod bumper jack which is 1,000x more safe than the traditional bumper jack.  I used them plenty when I was young.

Panning through the pictures you’ll see my fascination with induction, especially cool manifolds, is still strong.  The white spoke wheels I can remember being featured on Ford trucks starting in the mid 70s and I had never seen a set of OEMs for sale.  Not as many toys were out as usual if you exclude wagons and the kind that can be ridden/pedaled.  The orange ’69 Chevelle looked promising from afar.  There wasn’t a straight panel on it and plenty of signs showing gallons of mud had been applied with no effort to actually straighten any bent metal.  The Olds next to it was a completely different story and if I had the coin it’d gone home with me.  Solid, presentable, driver.

The urge was strong to pickup one of the crank paper towel dispensers.  That’d been awesome out in my shop.  Lastly the blue Cadillac was mint, fully-loaded, and ready to cruise.  I’ve not seen a finer survivor from that era.  After a quick checkout it would be road trip bliss.

Thanks for checking out our pics.  There’s another installment so check back soon.

Those Grilles Tho: The 2021 BMW 4-Series Has A Face That Some People Love To Hate 2020 PDRA Carolina Showdown Action Photos: The Baddest Doorslammer Series In The Land Attacked Darlington!