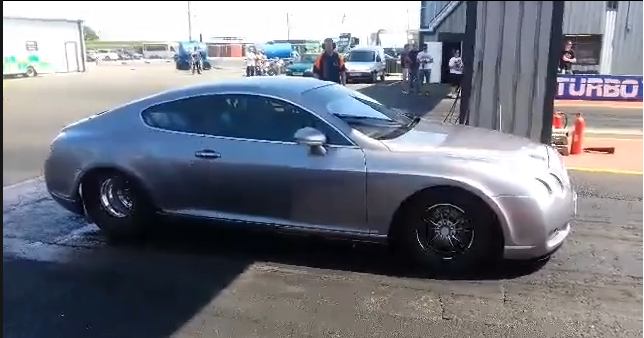 One of the coolest drag racing cat builds in the world is the Webster Race Engineering Bentley pro street project. This car is an insane undertaking that is now complete and officially out on the drag strip testing. The car is a full tube chassis, Steve Morris turbocharged, big block powered beast that looks like it belongs in a catalog of exotic cars (aside from the big ‘n littles). The Continental coupe has the horsepower to give Andy Frost and all of the Unlimited Drag Week contenders a run for their money on the drag strip and  is sure to be a six second performer once it is fully sorted and ready for action.

We mention Drag Week because it has already been rumored that this car will appear at the event (at some point) and Drag Week was a major impetus for the build. Depending on how open or closed up the owners want to be about their testing regimen, we may see more of this car cruising the English countryside to prepare for the punishing “road” sections of the route.

We think that this car and that this build in general totally rules. Anytime someone is willing to go through the all out expense and headache of commissioning and building a car like this, we dig it. The video below shows the car at its first test session completing a burnout and a lap. The lap is pretty quick for an early test hit and after the driver gets a handle on the burnout situation, we see one smoker that they’re probably looking at from space). This car is 100% bitchin’!

Post by Webster Race Engineering.
Best of 2014: This 1958 Ford Two Ton Dually Project Is Awesome And Less Than A Grand Asking Price! Best Of 2014: This Video Of A Dad Dropping His Son Off At The First Day Of School In An Insanely Gnarly Willys Rules