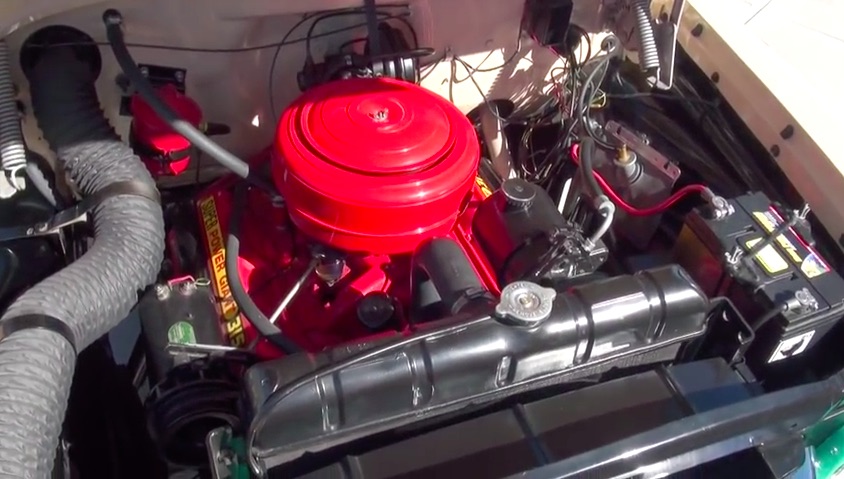 We’re pretty sure you were all waiting for 3/18 to come around and that we’d be talking Mopar small blocks at that point. Well, wake up! Rather than wait until the date you all knew was commingle figured that we’d throw a curveball at you and tell you about the short lived 315ci Chrysler Poly V8 engine which was available in trucks from the 1957 and 1958 model years. The Poly engines are interesting in the fact that they share a lot of their engineering and construction with the hemi engines of the day but none of the glory. The Poly engines are not often hot rodded or made into hairy engines because they are pretty expensive to get speed parts for and even after some strong spend and effort you are not going to have a real fire breather on your hands with respect to performance.

We’re not knocking these things, just stating some facts. The Poly engines themselves were hurriedly designed from the Hemi as a lower cost option because of the popularity of the V8 engine that Chrysler was producing. They knew that if the expensive Hemi was selling well, a cheaper version of the same engine would blow the doors off of sales. By eliminating one rocker shaft, altering the combustion chamber design, and designing a lighter head that used less material, Dodge engineers came up with something that would work to make some power but also put more money to the bottom line.

There were a bunch of different size Poly engines. This 315 was referred to the Super Power Giant V8 in 1957 and 1958. It made more than 200hp, used a 2bbl carb, and by all accounts was a fine truck engine and did everything that the offerings from Ford and Chevy were doing as well. The 315 was replaced with the typical 1950s Detroit “bigger and better” in 1959 but many of the engines troop on today, powering vintage trucks and keeping those less educated gearheads guessing at car shows. The sawtooth style valve covers get many people, especially the younger guys guessing, don’t they?

This 1985 Chevrolet Eagle Bobtail Tractor Has 4-Wheel Steering And Is Crazy Big! The Fiero Revival: Now That It Runs Fine, Time To Get Onto The Body Work

One thought on “Happy 3/15! Today We Look At The Oft Forgotten 315ci Chrysler Poly V8 Engine”