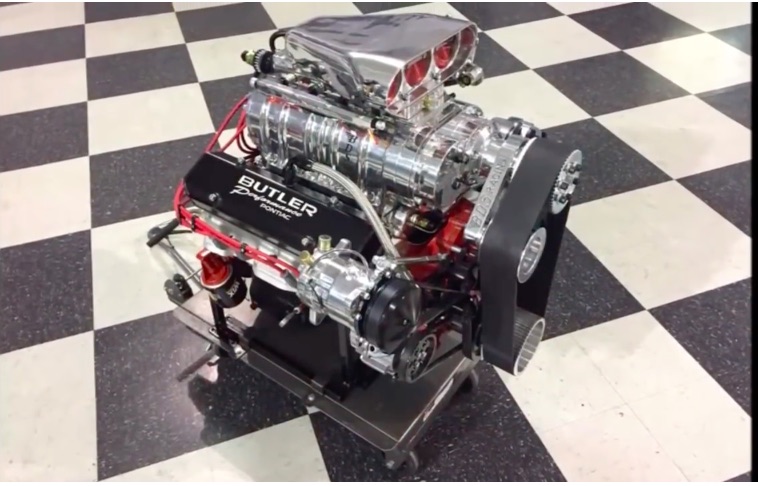 This is the cure for the common LS engine. You are going to watch an awesome 535ci, Butler Performance built Pontiac engine whine and grunt out more than 800hp and more than 850 lb/ft of torque on the dyno. The insane thing is that the torque peak is made at 3,8000 RPM according to the Butler guys so that would make this thing an awesome street engine in every way. It will mangle tires from here to eternity. We have no idea what model of Pontiac this engine was headed for but we can only guess it is a GTO of some form or fashion. We’d love to see it in a Bonneville or Catalina but we likes ’em big. That’s just our thing.

Note the fact that this thing has a damned AC compressor hooked to it as well. That means whoever is driving around with this monster under the hood is also going to be doing it in comfort. How cool is that?! Far be it from us to suggest modifying he awesome work done by Butler Performance but if one wanted to make some more horsepower in a pretty quick fashion they could swap out the wagon-wheel sized top pulley on the blower, load the thing up with good gas, and really let it eat. Dumb for a street engine but interesting for the occasional trip to the strip, right?

We love the fact that people still crave engines like this and the fact that Butler Performanc is still a thriving performance business even a decade after Pontiac ceased being a thing. Who needs an LS engine, right?

MAHLE Motorsport Introduces Ford 5.0L Modular 4-Valve Coyote/Voodoo PowerPak Plus Piston Kit This Vintage Motorweek Review Of A 1985 Dodge Shelby Charger Is Great - These Were Good For Their Time