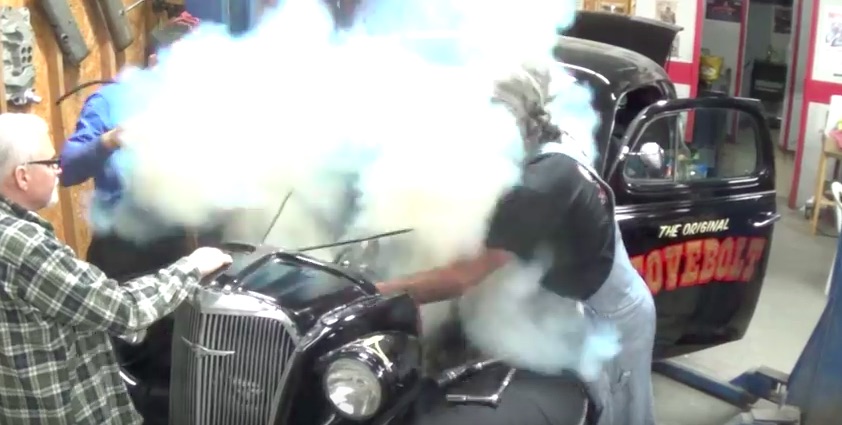 This is a legitimately shocking video. We saw it on Drag Week gasser hero Dan Chisolm’s Facebook page and figured that we had to share it here. The video captures a Chevy big block top end explosion that happens on startup which is so violent that you literally cannot believe it. The fact that the three guys in this video weren’t killed instantly by shrapnel and flying steel is a miracle in and unto itself.

So what happens? We can see the guys feeding fuel down the throats of the carbs on the engine in anticipation of firing up the engine. You’ll need to watch the video a couple of times to see all the stuff going on but as the engine is turning over you’ll see a small fire start on top of what looks like the top of the intake manifold. As the guy on the right moves the throttle linkage back and forth, introducing more and more fuel to the intake tract We’re not sure if some of the fire you can see gets sucked into the throat of a carb and ignites all the fuel or if an errant spark ignites everything in the intake all at once but this thing explodes like there’s a stick of dynamite inside the intake manifold.

You’ll be blown away at how violent the BOOM is and we have to warn you that the guys were shocked enough to mutter some “adult” words here and even the most pious among us may not be able to castigate them for their choice of language in the immediate aftermath of the manifold explosion.

Bottom line? This stuff is dangerous and even the most knowledgeable, seasoned, and experienced among us can run into issues like this when they least expect it. Just wow.

BEWARE LANGUAGE – PRESS PLAY BELOW TO SEE THIS STOVEBOLT EXPLOSION

Late 1970s Car Ad Video Bonanza: Dodge Trucks, Ford Trucks, Mercedes Station Wagons, and Even Some Buick Opel Love This Week's Photos, All In One Place! Check Out What You Might Have Missed This Week.