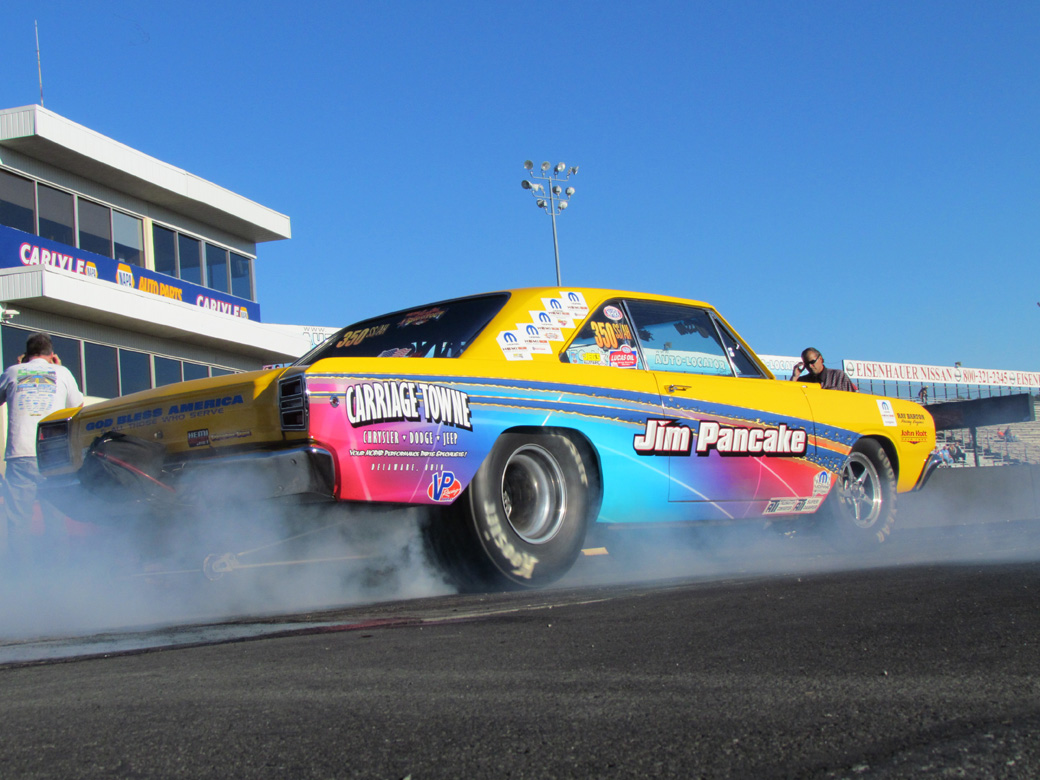 (Words and photos by Joe Grippo) – Maple Grove Raceway for the 43rd time hosted the Pennsylvania Dutch Classic, part of the NHRA Division 1 National Open Series and for the last several years it has been the best spot outside of the US Nationals to see the nationís best SS/AH hitters battle it out for Hemi supremacy. For 2014 11 Hemi Super Stockers showed up at the Grove vying for the Hemi Challengeís $10,000 cash purse sponsored by Penske Leasing and loads of contingency prizes from Jesel Valvetrain. The body style break down this year was 4 Darts and 7 Barracudas and Hemi engine builders were battling for bragging rights as well, with each having their top teams represented. Ray Barton powered cars were going head to head with Charlie Wescott power plants along with a relative new comer to the elephant wars, NHRA Pro Stock points leader Jason Line from KB Racing who has partnered up with SS/AH legend Bucky Hess on a new 426 Hemi development program. Pro Stock technology has come to SS/AH.

Hemi cars came from all corners of the country with the likes of Mike Booker from Washington state, Russ Cambellís Missouri Mule Barracuda from Springfeild Mo, Don Balesí Silver Bullet Barracuda out of Indiana and the 2 car Howes gang from the great white north among others. Local Young Gun, Kyle Kohr made his debut at the event with a beautiful Barracuda from his familyís Pennsylvania based Mopar Restoration Shop. Qualifying ended up with David Barton rowing Jim Daniels’ stick shift Dart to the top of the heap with a 8.32 and Matt Welker from Clear Spring MD bringing up the rear, in the 11th spot. Rain pushed the Saturday scheduled Hemi Challenge to Sunday along the rest of the event eliminations. Unfortunatley this circumstance forced Bales and Booker to head home early; so nine cars made the first round call. After 4 awesome rounds of racing Gary Wolkwitzís EarthQuake Dart dazzled the crowd with a string of 8.20ís culminating in a final round match up with Bucky Hess, where Wolkwitz unleashed a jaw dropping 8.280 @ 159.06 for the win. Wolkwitzís road to the final took him through Jim Pancake, Barton and Mike Booker while Bucky had a bye in to the final after besting Wendell Howes and Don Bales. Killer racing with killer cars. Check out the pit and on-track action in the Gallery. 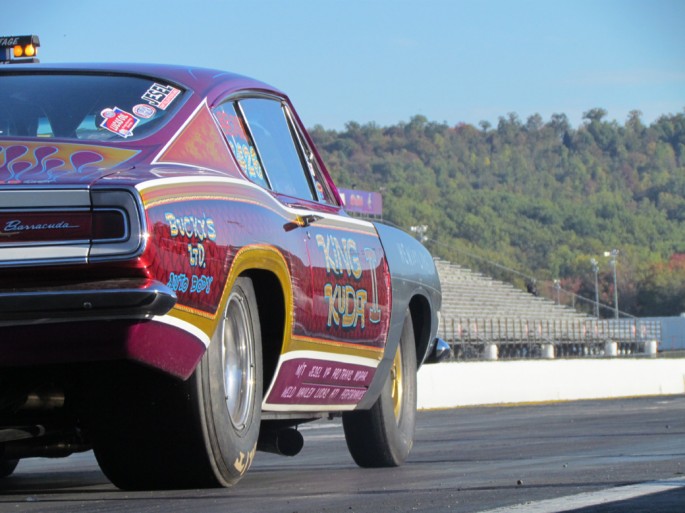