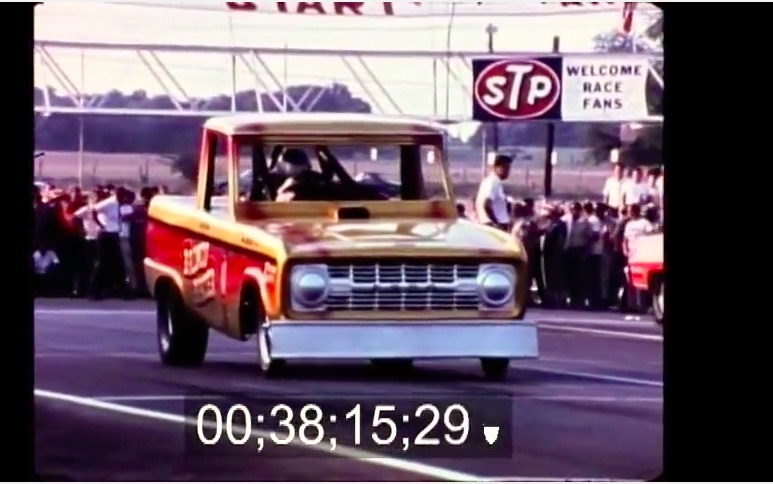 I find myself too often saying that we’ve found or been tipped off to the best vintage drag racing video on the internet but the reality is that each time we think we see one that cannot be topped, another pops up like we’re playing Whack-a-mole or something. This time it is the film below from the 1966 AHRA finals at Green Valley Raceway in 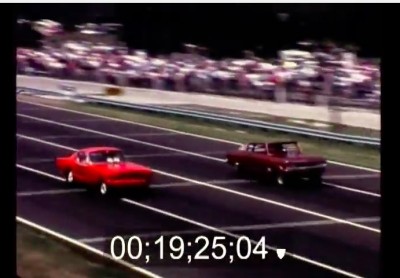 Texas. This was a massive race at one of the country’s nicest facilities during that era. The film focuses no on the dragster class but rather on the full bodied stuff, especially those running in the FX-F class. What’s FX-F? How about Factory Experimental-Fuel (meaning nitro). This is a group of people that includes Dick Harrell, Gas Ronda, Doug Nash, the CKC team and their odd fastback Nova, Ray Capps and his topless Plymouth cum Dodge, and Doc Spence in the Missouri Mule. The film was made by a professional crew and it includes some truly great moments like a tour of the cutting edge (for 1966) timing tower, interviews with Harrell, Capps, Dale Armstrong, and Gas Ronda, along with a great Jim Tice interview to boot.

What is captured here is far more than racing. What is captured is an era where the sport was in a great period of transition. One need look no further than the efforts of Dale Armstrong in the Canuck and Ray Capps in the Headhunter to see this. They were the prototypical drag racers. They built the stuff by themselves they made the 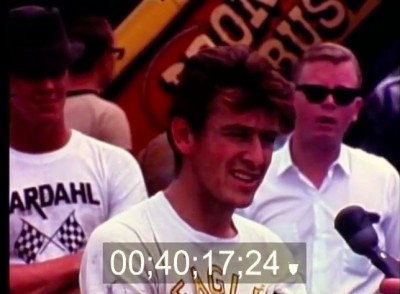 changes they thought would work, and they beat on stuff harder and longer than anyone should have. Contrast that to the guys they were racing like Gas Ronda in the amazing and beautiful Ford Mustang with its injected Ford Cammer  engine in it, Dick Harrell in the Nova that had backdoor factory support from Chevrolet and you can quickly see what the direction of the world was. Guys like Armstrong took their experience and skill and advanced through the ranks to become modern day legends. Guys like Ray Capps hung on and continued to run on a smaller scale for years before leaving the sport in relative obscurity even after having a big weekend like he does here at Green Valley.

Things were changing so rapidly at this time in drag racing, especially for cars like the ones featured here that they’d be nothing much better than scrap in months after this video was made. In 1967 Dick Harrell would be in a Don Hardy built, flip top, tube Chassis Camaro with an injected and later blown big block Chevy engine. This was a car that makes the Nova he’s driving in this film look like it was hewn from a piece of granite. The technology was 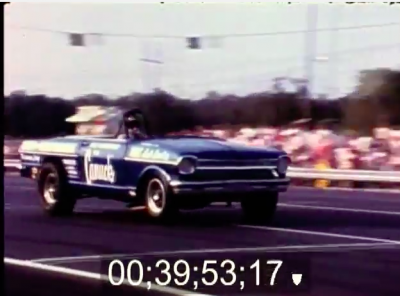 not just advancing, it was rocketing ahead. Gas Ronda would also turn in his door handles for a flip top car in 1967 and it was pretty much the industry standard at that point with a few (a very few) holdouts still trying to get by the old fashioned way.

NHRA is celebrating 50 years of the funny car during the 2016 season and we get why they chose this year to be the one. The 1966 NHRA World Finals was the first time that there was an actual, official, funny car class contested (it was won by Eddie Schartman) so it makes sense and ties up nicely. The reality is that their hand was being forced (as was AHRA’s and others ) by the racers and manufacturers to make this a reality for years prior to that.It wasn’t political lobbying mind you but rather people just building crazier and crazier stuff that escalated this situation. From the supercharged gas burning Dodge Chargers that Jimmy Nix and Jim Johnson drove to the supercharged nitro burning full bodied cars of guys like Jack Chrisman, the recognition of the class in ’66 was something that had to be done because if not it would have been denying what had become the most popular thing in the sport and it only got more nuts from there.

The things that are so spectacular in this video (to me, anyway) are many. Seeing the Doug Nash Bronco Buster actually line up and run is close to the top of the list. I had only seen still photos of the ultra-light, aluminum framed, nitro drinking 289 powered beast before and there it is on screen running down the track. Seeing the CKC Bill Thomas fastback Nova in competition is another incredible one. The Gas Ronda Russ Davis Ford is awesome and the car ran as good on film as it has in the history books I have read. Lastly and most especially there are the interviews. First with a humble and “aww shucks” Dick Harrell who articulates his opinions on the sport, the fans, and the scene perfectly and then goes on to give a great description of his car. Secondly there’s the Dale Armstrong video. In the film he’s a wiry Canadian kid who drives an awesome topless Nova. He’s having supercharger problems and thrashing to get the car fixed. This is (again, in my opinion) the greatest mind the sport has even known and we see him in a greasy t-shirt doing what he loved to do the best. The smile is genuine and the demeanor is humble. This is just so awesome. Finally there’s Jim Tice who was the leader of the AHRA and a true drag racing visionary. He says things in this interview in 1966 that were to come true decades later. Watch it and you will be amazed.

Of all the drag racing videos we have ever showed you, this one is at the top of the heap. I didn’t even mention watching the handicapped start given in the stock eliminator categories or the fact that the competitors in the fuel burning FX cars came back up and were basically allowed to pull out all the stops in a special second chance eliminator that was surely created by Tice for the enjoyment of the fans.

Just press play. This is stupendous!