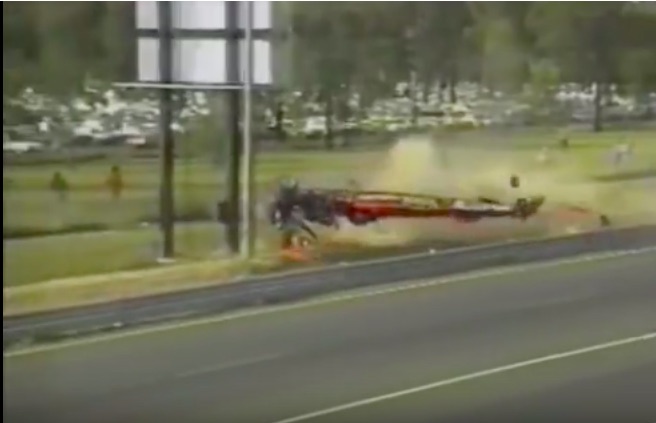 Every country, quite literally has their drag racing legends and they do not come much larger in Australia than Jim Read. This is a guy who had career in top fuel that spanned many, any decades and included a bunch of wins and championships. He was sponsored by the same company for a long, long time and he was internationally respected as a strong racer not only in the Aussie scene but in the global scope of top fuel. Like all top fuel racers, Jim’s number came up in 1990 when he was racing his car and suffered an insane wreck that you can watch below.

This is one of those worst case scenario wrecks where quite literally all the things go wrong at the right time and the end result is complete and utter devastation. You will see Read fight for control of the car, get some tires off the surface, and then rocket across to meet the guardrail. That meeting launched Read into the air, through a concrete post that was supporting the scoreboard backwards, and smashing into the ground. The impact was so violent the entire engine rolls along like some sort of gruesome softball.

Read was Ok and actually walked to the ambulance under his own power but this crash apparently left him diabetic. We have no idea how that happens so maybe you can tell us in the comments. We just know that it took a massive pair to climb back into a car after getting away with one of the most gruesome looking top fuel crashes we have seen in the modern times of drag racing.

Watch The Largest Ford Dually In The World Take on Two Mega Trucks In A Tug Of War Want To Upgrade The Standard Truck Floater Axle in Your Drag Car? Mark Williams Has You Covered!