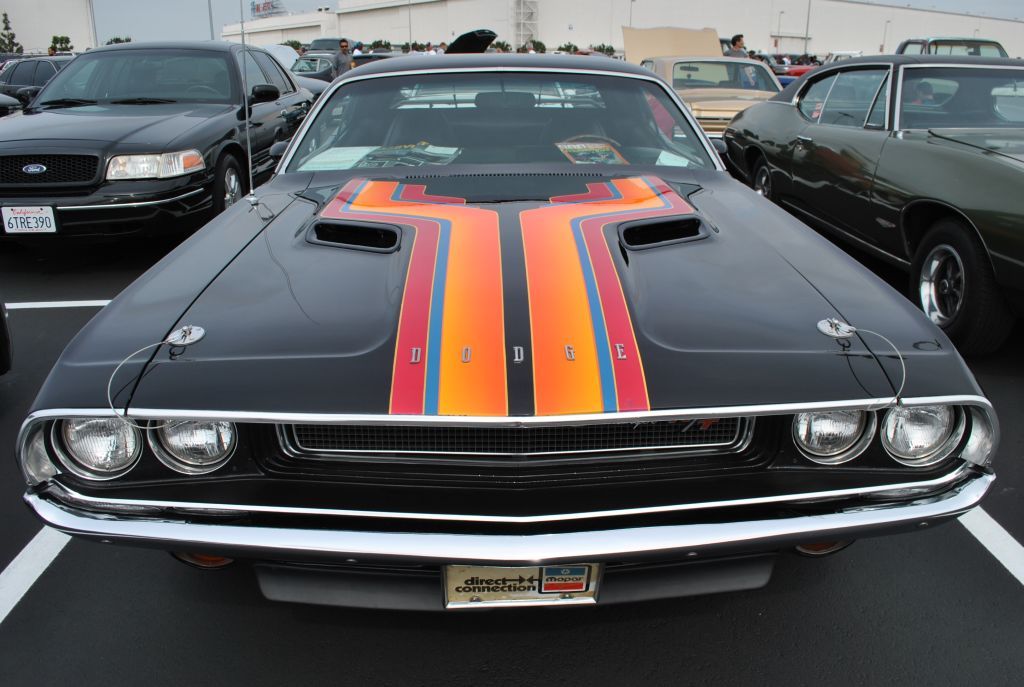 (Words and photos Scott Liggett) – As one of the Bangshift contributors, I had a slower year in 2013. There was a big change in my life this year that prevented me from turning in my usual amount of photos and blogs. I will explain more on that later. I did hit up some pretty cool shows and such this year. And, two major road trips.

In Los Angeles, the car season goes pretty year round, so the new season starts after the new year when in late January the Grand National Roadster Show returns to the Pomona Fairgrounds. The show takes place in the property’s pavillions area in the shadow of the famous NHRA drag strip.
I have a soft spot for indoor car shows. Those are the ones I first started going to as a kid. The GNRS brings back memories of going to the ISCA World of Wheels shows. Wild customs, some near useless as a driving vehicle, were of the day when I started and I am still fascinated by them. The Pizza Wagon below is a great surviving example of those cars complete down to the uber-expensive Firestone Indy tires. 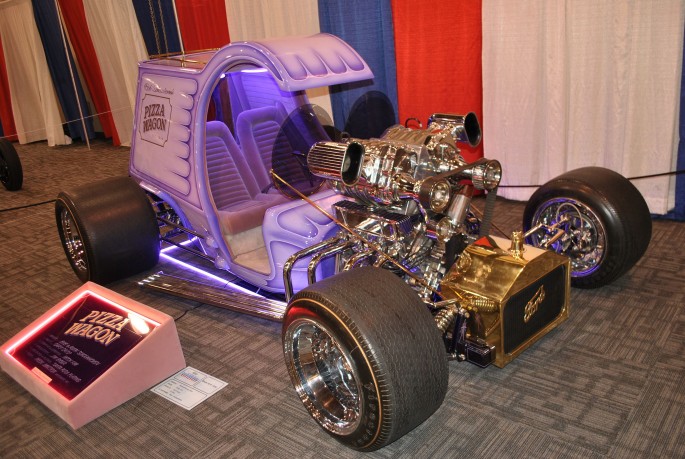 GNRS is also different from those shows of old because the builders of the cars are there and very accessible to talk to. Nobodies like me have talked to huge names of today like Troy Trepanier, Steve Strope and the Ring Brothers as easy as any car guy at the local soda shop show. They are more willing to show you their latest build and the details on each one. A couple years ago, I was literally in the spinning display talking Troy about his latest Buick build as he pointed out really cool ideas. I totally recommend this on your bucket list.
Usually, I am not a fan of low riders. I have a greater respect for their builds because the attention to the details on this bright yellow ’65 Impala SS convertible were absolutely amazing. This picture doesn’t do it justice. 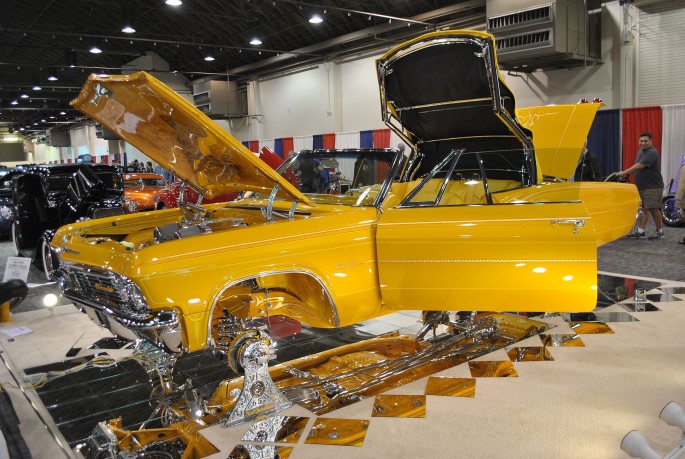 The beginning of March in SoCal means the March Meet. Many Bangshifters watched the live feed and Chad Reynolds hosting it. Our Brian Lohnes was there snapping photos along with a couple other guys, I decided to go as a spectator because last year I focused so much on taking pictures, I never saw any of the racing. I did get this shot of a ’65 Biscayne sporting a big Bang Shift decal. I couldn’t believe how clean and original the body was. I wanted it. 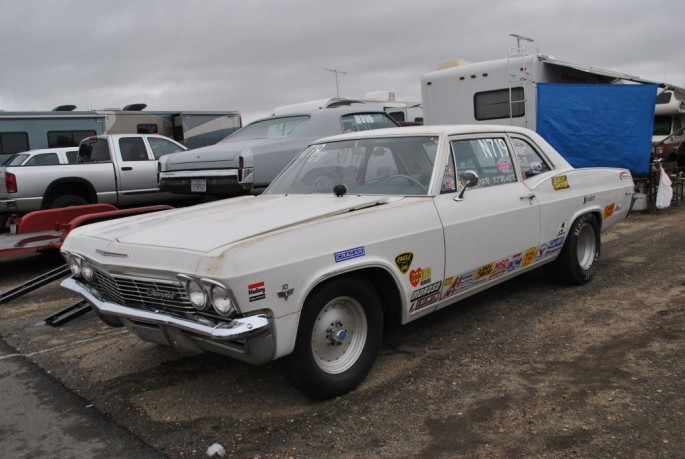 Late March I returned to Pomona’s Fairgrounds for Hot Rod Magazine’s Reunion Show. If ever I was completely taken by surprise by a car show it was this. I could not believe what it did to me to see cars I have read about all my life in Hot Rod right there in front of me. I couldn’t believe how many I remembered reading about over the years. I didn’t want to leave.
In the early ’80’s, the pro street movement really took off. They got wilder and wilder. By the end of the decade, gearheads pro streeted ever known vehicle to man. Rick Dobbertin’s Nova outdid most of all of them and it was an early build. No one who ever saw, it ever forgot it. This was my first time seeing in person. It still wows them and is exactly as it was built. 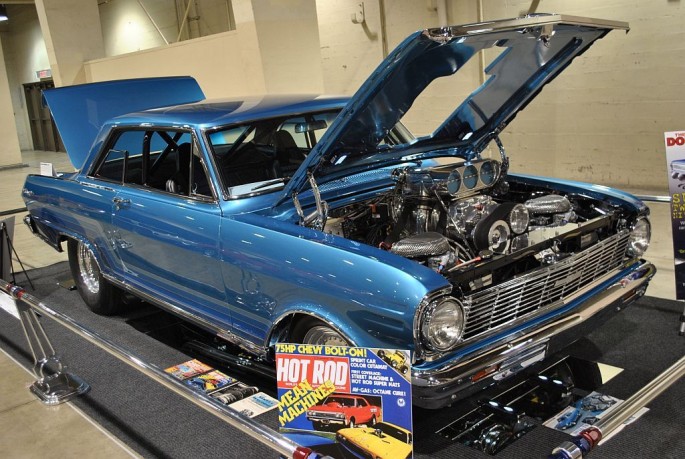 Hot rodders are still talking about Steve Magnante’s total death trap and cool as hell Chevette he butchered up to stick a Caddy 500 ci into. It came out of hiding untouched from it’s build up over several issues. Steve wrote up a three part blog here on it’s back story. It stills looks to be the scariest car ever built. I love it. 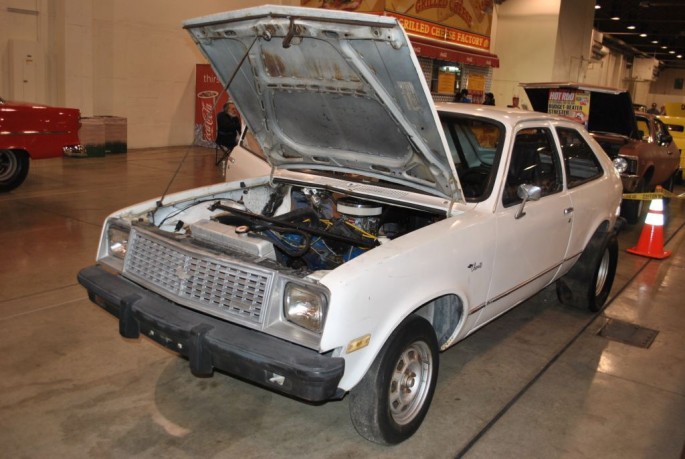 I got to meet Murray Pfaff, the graphic artist, car designer and builder of the famous Imperial Speedster. It’s amazing he and his buddies built this car his in his little two car garage in his backyard. I got him to stand next to it show it’s scale to show how much his creation is now compared the giant Chrysler sedan he with. He and I talked for over an hour that day. 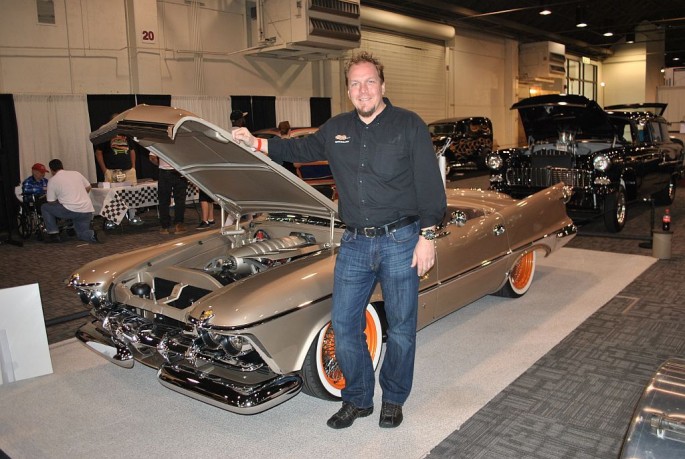 At the end of the night, the staff of Hot Rod got a bunch of hot rodding’s royalty to sit down for pictures and signatures. Some of the notables were Vic Edelbrock Jr., TV Tommy Ivo, Roland Leong, Ed Pink, Don Prudhomme, George Barris, Jim Wangers (whom I spoke to for awhile on the factories and their advertising during the muscle car era). And, of course these two lovely ladies who gave me great big smiles when I took this. That’s Courtney Hansen who hosts Spike Channel’s Power Block TV and Linda Vaughn, the legendary Ms. Hurst Golden Shifter. 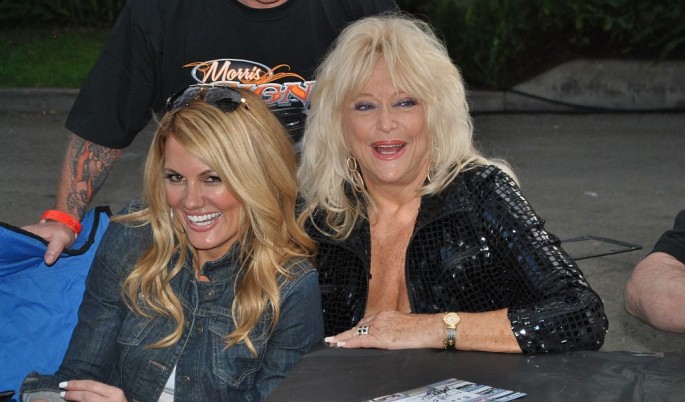 This is what happens when Bang Shifter Scott Clark, aka DieselGeek, sees me put my camera down. He caught me trying to spy some of Grumpy Jenkins’ secrets on his Pro Stock Vega. 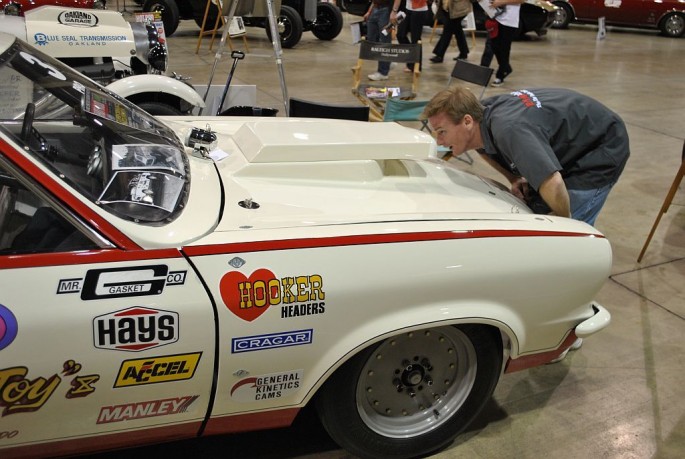 In April, I decided to go parts shopping at my favorite place, Long Beach High Performance Swap Meet. Brian would never forgive me if I didn’t drag my camera and I am glad I did that day. I came across this absolutely stunning garage find Car Craft Magazine cover car from the early ’80’s. It is exactly as it was on the cover over thirty years ago. That Lazini paint job still looked spectacular. The owner had been threatened to have his totally emissions illegal car, at the time, impounded if he was spotted on the street again. So, he parked in his garage right after the photo shoot, buried it in moving blankets, and left it for thirty years. If I had the asking price, I would’ve bought it on the spot. 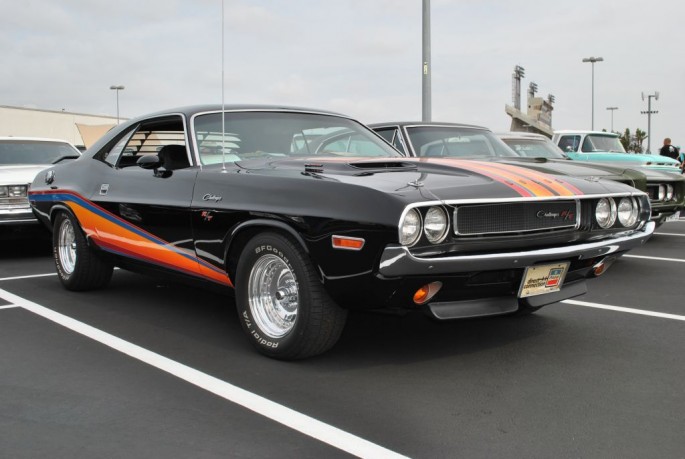 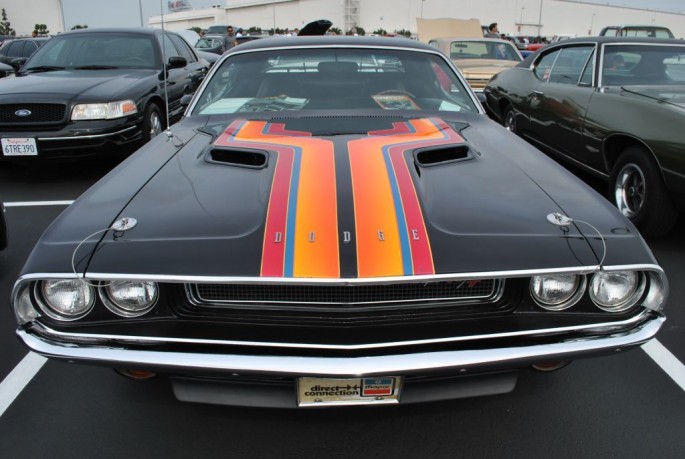 A couple weeks later, Pomona’s world famous and massive swap meet came back. So, I decided to walk around the entire show because I haven’t turned my legs to rubber all winter. I always find something interesting I want to buy like this ’71 Plymouth with Nascar flavor. 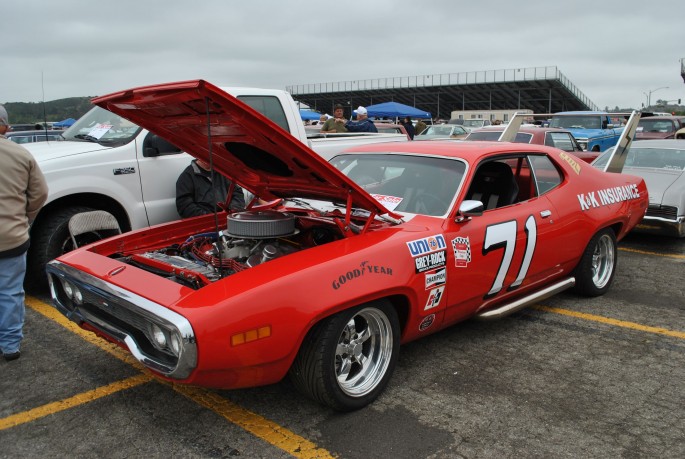 In May, I took a the Friday before Memorial Day off of work and headed over to Bob’s Big Boy in Toluca Lake to hit up their legendary Friday night car show. There are always some great surprises there like the nutty guy who paid $4.5 million dollars on the original Bat Mobile at Barrett Jackson then drive it to Bob’s with no plates. Well, it was sporting Gotham City plates. I caught this shot while he was backing into a parking space. Everyone stopped in the middle of the maneuver to gawk at me like I forgot to wear pants. Still don’t know what I did to get these looks. 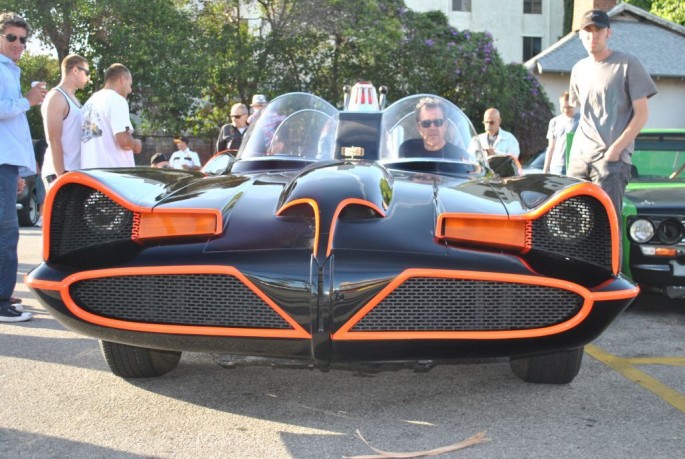 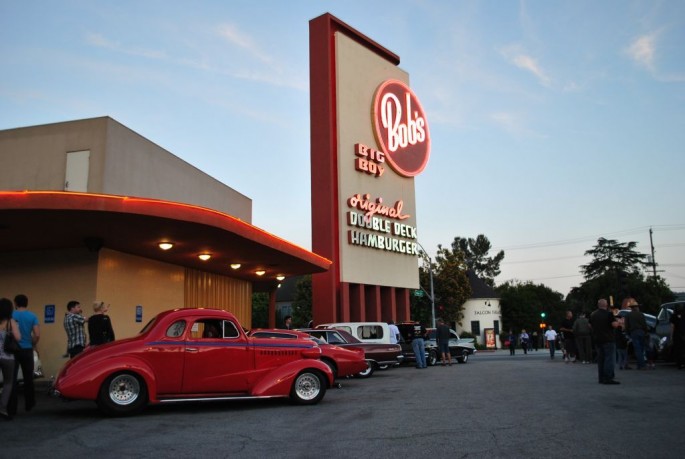 In late summer, my life got turned completely upside down. I quit my job of 15 years driving around the rich and shameless in Los Angeles, packed up my crap, and drove to tiny Kearney, NE to take a job as a tech and product specialist at BluePrint Engines. It was a huge leap of faith for me and the company that took a chance on me. But, I was doing what I liked, in the field I loved, in a job that has a future.
In August, I piled in my trusty ’65 Impala with brand new 18″ tires and wheels headed out on the open road. I didn’t cannonball straight there, but drove north first to visit with family and friends, before heading east through northern Nevada on US 50. Often called the loneliest road in the country. It was beautiful drive.
US 50 starts off in Sacramento winding up into the Sierra Nevada Mountains, going past Lake Tahoe. An absolutely gorgeous drive. The American River runs right next to the highway on the western slopes and in spring, the snow melting turns this section into a raging river. It’s peaceful in late summer. There are many places to pull over to enjoy the scenery. 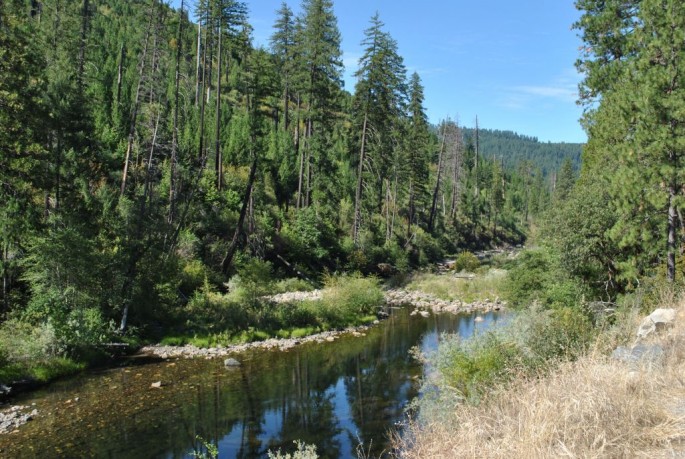 Echo Summit is over 7,000 ft in elevation and this section of the road was originally built 1913 and offers spectacular views of Lake Tahoe and the surrounding mountains. Just don’t take your eyes off the road here. That stone was is barely knee high and it’s a long way down to the bottom of the valley. 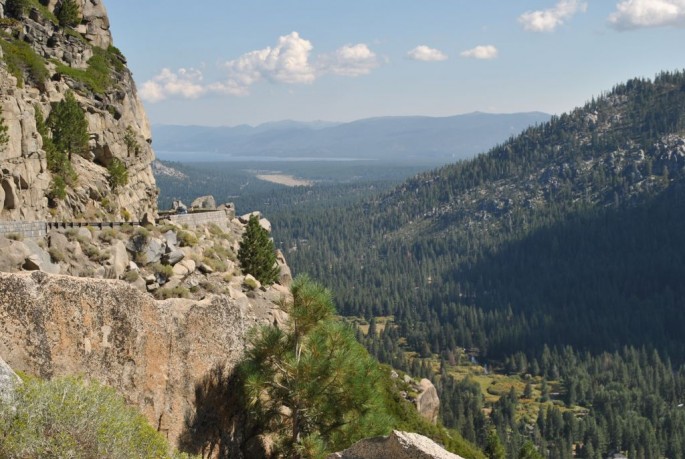 On eastern side of the Sierra’s, the green mountains become the dry desert and driving east across Nevada are a series of ridges and valleys. All with different foliage and levels of green. It was quite beautiful. It also peaceful with practically no traffic and only small towns and outposts every few hours of driving. I came across some interesting things on my way across Nevada to my next stop in Ely. These first two were taken at an old stage coach stop that got lost in time. 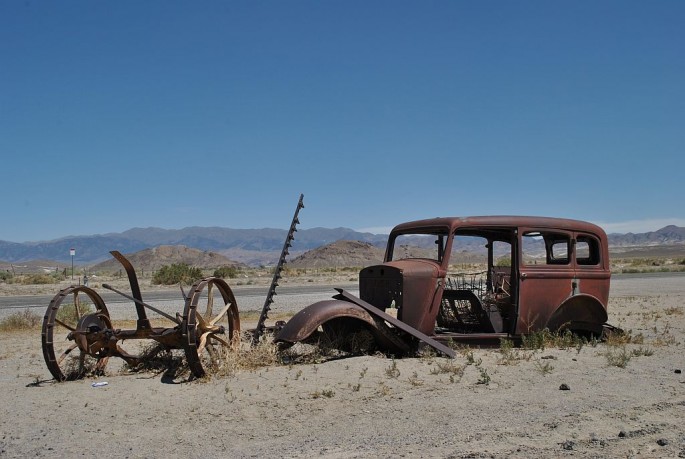 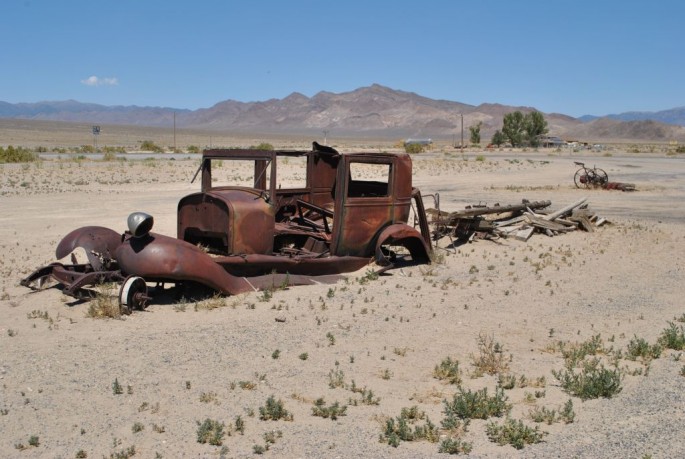 At what was literally a shack in the middle of nowhere and once a stop along the Pony Express Trail, I snapped this shot of my Impala with it’s new shoes. 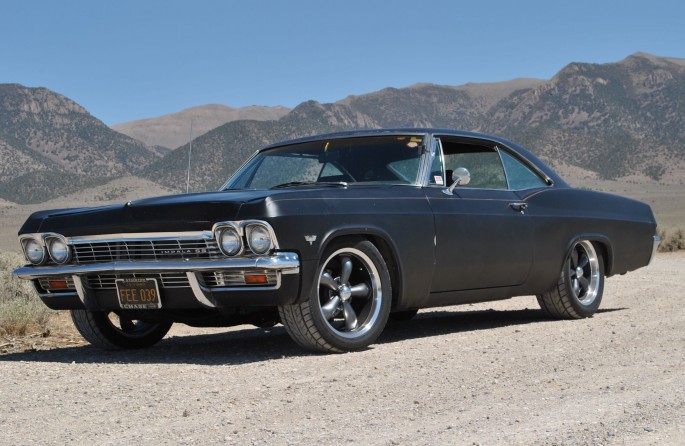 The next day, I met up with Randal Burns and Jim Forbes, TheSilverBuick and Squirrel on the forums, and we caravaned out to Bonneville Speedway on the Great Salt Lake for the start of Speed Week. It was the first time I had stepped on the salt since May 9th, 1988 when I stopped at Wendover, NV on my to California. There was no one else there that time. I was only able to stay for a few hours before trekking all the way to Cheyenne, WY that evening. I got some pictures there.
This is Jim Forbes’ ’57 Suburban he dragged out of his backyard after a decade and restored in a month. Amazing work by a human machine to get this quality work in that short of time. 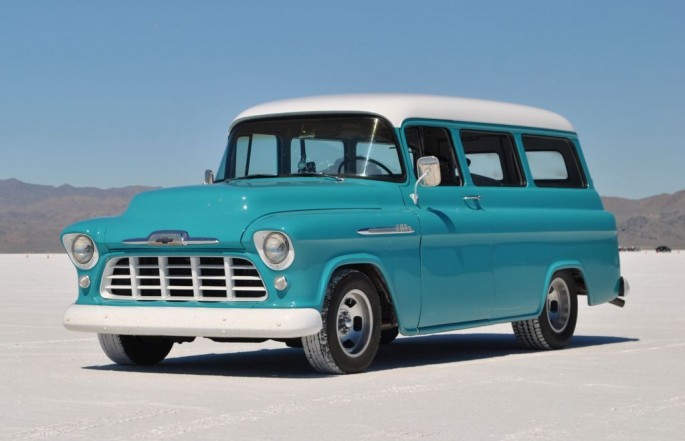 With sights like this and the environment, it would be easy to think that you are not on earth anymore. 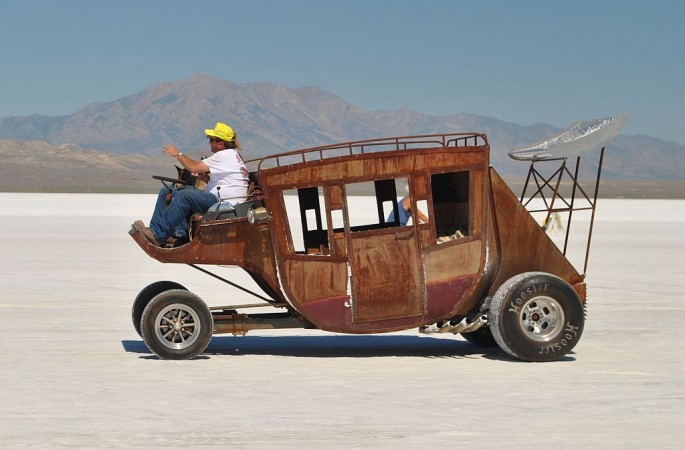 Of course, I couldn’t resist shooting a few pics of the Impala on the salt before I left. 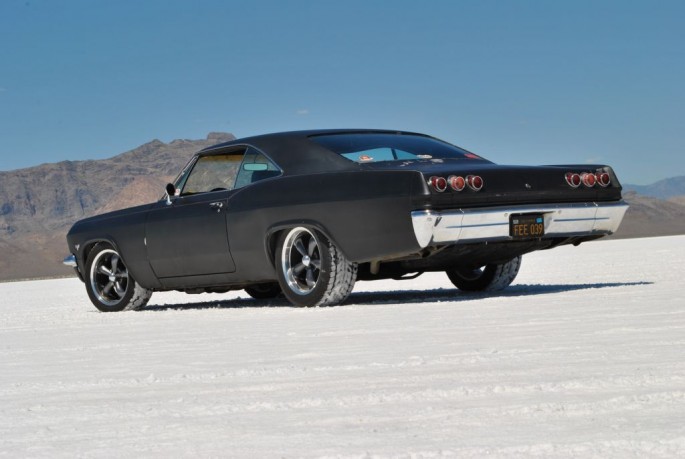 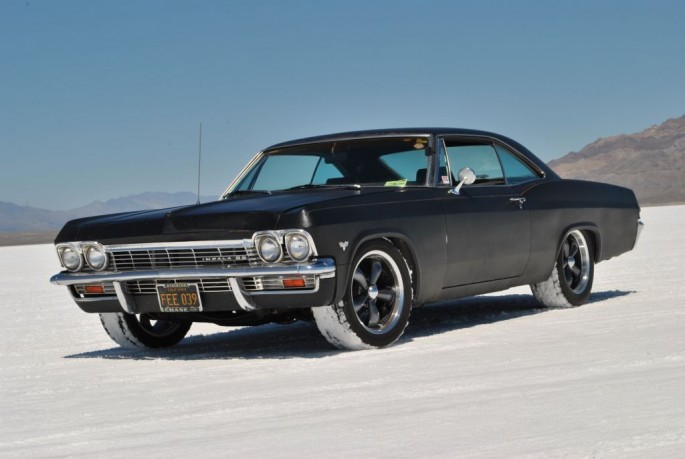 The next afternoon my new life in Nebraska officially started when I crossed the border. I stopped on the freeway to get this. Apparently, I wasn’t the first to do so. 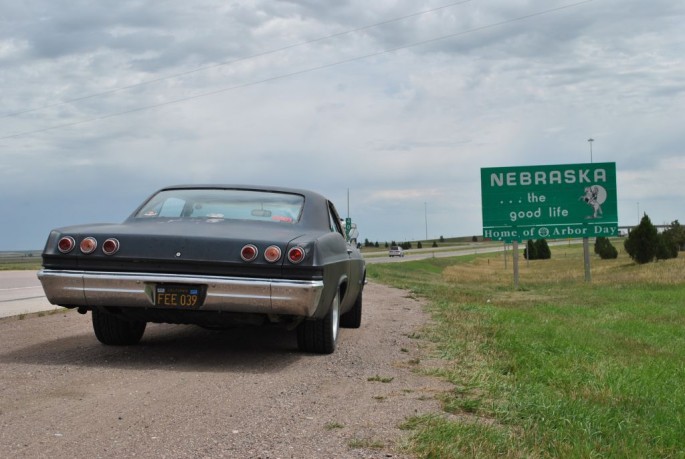 Kearney may be a small town in central Nebraska, but has a great 1/4 mile drag strip on NHRA’s Division 5 tour. Kearney Raceway Park is a great little facility. 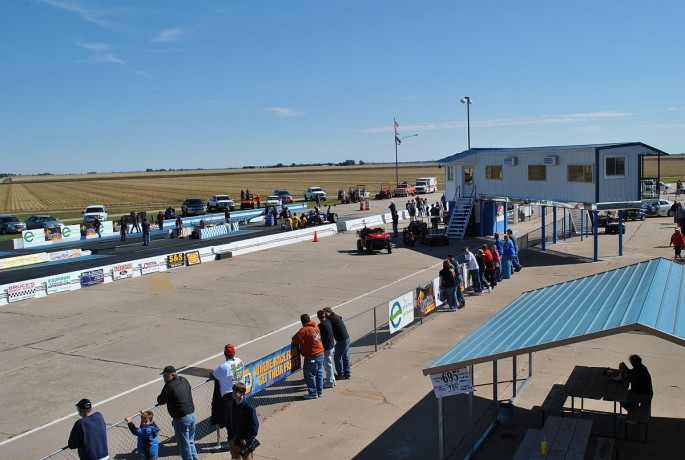 Craigslist Find: Nutting Finds You The "Class Killer" For The New SCCA Pro Touring Class BangShift Question Of The Day: What Modification Do You Most Want To Make To Your Hot Rod This Year?