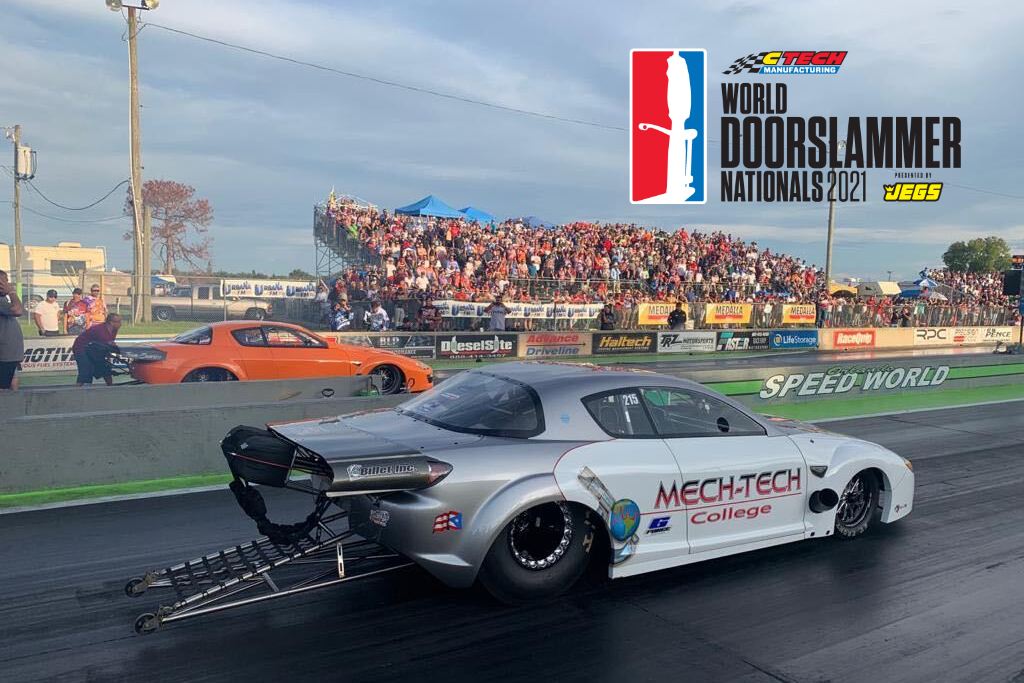 As if the CTECH World Doorslammer Nationals weren’t going to be big enough, they just keep adding classes! This time it is some of the worlds quickest and fastest sport compact and import powered cars. The two classes will feature some exciting cars to watch, with 5 second quarter mile passes in Modified Pro Compact absolutely possible, and mid 6’s in the short wheelbase import class that is being called “Old School” because these cars pull the wheels and are a riot to watch with just a 90 inch wheelbase.

Here is all the info, including a link to buy tickets if you want to come and watch!

ORLANDO (Feb. 26, 2021) – An already loaded show at the CTECH World Doorslammer Nationals presented by JEGS will now include another thrilling aspect at the second annual race, which takes place March 5-7 at Orlando Speed World Dragway.

Race officials announced today a special eight-car invitational shootout in Modified Pro Compact during the race, bringing the quickest and fastest import cars to the biggest doorslammer event of the year to thrill fans with runs in the low 6-second range at more than 230 mph. There will also be an “old school” eight-car import shootout featured cars with a 90-inch wheelbase running in the 6.50s and known for their massive wheel stands the entire race.

The facility has annually become a hotbed for some of the most impressive import events, and will now host a special shootout in two wildly-popular import classes with $10,000 in prize money on the line in each at the CTECH World Doorslammer Nationals presented by JEGS.

“Since 2012, (track owners) Ozzy and Maria Moya have worked with GRS Motorsports to do a big import event each year,” said Gabriel Garcia at GRS Motorsports, who worked with race officials to hold the shootout. “Because of that, the biggest and baddest import events in the nation are being held at Orlando Speed World Dragway. Now, fans will get another chance to see these cars side-by-side in Orlando, along with the Pro Mod cars and Pro Stock cars. It will be the first time all the fastest import cars will be there, and it’s going to be very exciting.”

FuelTech will be the main sponsor for both classes.

The Modified Pro Compact class consists of Pro Stock-type chassis cars with 4-cylinder and 2-rotor engines that run in the 5.90s at more than 230 mph.

For the special shootout at the CTECH World Doorslammer Nationals presented by JEGS, some of the fastest import cars in the world in each brand will be on hand, including Rafaelito, which is the world’s fastest small-block rotary after going an impressive 6.161 at 222.73.

Combined, it’s a star-studded lineup in both import shootouts.

“This invitational at the CTECH World Doorslammer Nationals presented by JEGS is going to bring out the baddest import cars on earth, and we couldn’t be more proud to have them as part of the event,” Drag Illustrated Founder and Editorial Director Wes Buck said. “I believe it’s a great crossover opportunity for all the fans who are going to be at this race. People will be exposed to import racing for the first time and they’re going to fall in love with it, and import and compact racing fans are going to see Pro Stock and Pro Mod for the first time and love it. Bringing those two worlds together, it’s just a huge win-win for everybody.”

The eight-car shootout will include two alternates in each class, with the teams set to put on a remarkable show.

“I love the energy and enthusiasm that exists among the import and compact crowd. When I’m around these fans and racers, I feel at home. They’re passionate and enthusiastic, and I’m excited about the international fanfare that comes with it.

“One of the things we know about Orlando Speed World Dragway is high-quality import racing moves the need. That energy is so unique, and that kind of enthusiasm and passion is a home run. It takes the event and just pushes it over the edge.”