Jasmine Salinas Walks Away From An INSANE A-Fuel Dragster Crash At The NHRA Gatornationals in Gainesville Florida. 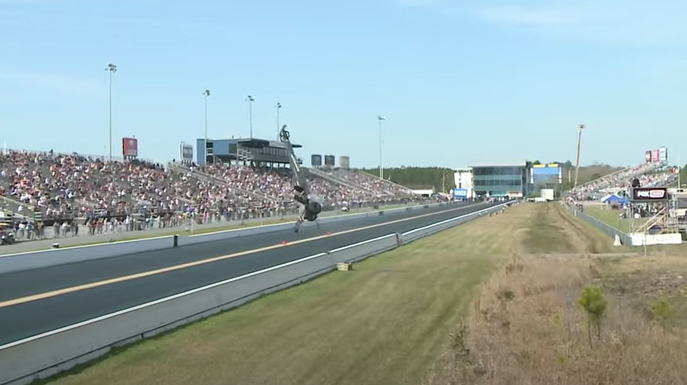 This is one of the most insane dragster crashes we’ve ever seen, and thank God Jasmine Salinas walked away from it. NHRA referred to it as a blow over, but there was a lot more going on here than your “typical” dragster blow over. Jasmine, who finished qualifying in the number two spot in Top Alcohol Dragster, is clearly no slouch in this race car and it was working very well here in Gainesville. On this particular run, after leaving the starting line, you’ll see that the car does a pretty abrupt and big wheelstand which puts it hard on the wheelie bar. After pedaling the car to get the front end down, Salinas rolls back into the throttle to see what she can make out of the run. At this point she is not doing anything stupid. Not at all. This is NOT a case of someone continuing to drive the car when there was not reason. She simply rolled into the throttle again to see what she could salvage. Again, this is not uncommon to see what the car will do should this scenario happen during eliminations. Salinas was already at the top of the qualifying sheet, only to be surpassed by the very car in the other lane during this crash.

As Jasmine got back on the throttle and trucking along, and with the car fully hooked up and the clutch in full lock, the front end drove up in a big power wheelie that broke the wheelie back and let the car climb to the moon before there was anything she could do about it. Flying through the air straight up, and then straight down, over the span of the last half of the 1/4 mile track was scary enough, but she wasn’t even close to done with this wild ride. After landing on and over the wall, the car tumbled and flipped over and over again, coming apart before reaching the tree line past the finish line. With the car in complete shambles around her, Jasmine climbed out of the car on her own and was attended to by Safety Safari. She didn’t want to go to the hospital for evaluation, but the medical team insisted. She was back at the track later in the afternoon, and the video of that is below as well.

Big thanks to Sam Davidowicz for snagging great footage of this crazy one and sharing it with the world. We REALLY appreciate the angle. Thanks dude.

Video by Sam Davidowicz and NHRA.

Chassis Swapping A Squarebody Crew Cab Onto A Dodge Cummins 4x4 Chassis! It Happens Everywhere: This Compilation Of Wild Runs From The Brazilian Drag Racing Scene Is Awesome

One thought on “Jasmine Salinas Walks Away From An INSANE A-Fuel Dragster Crash At The NHRA Gatornationals in Gainesville Florida.”