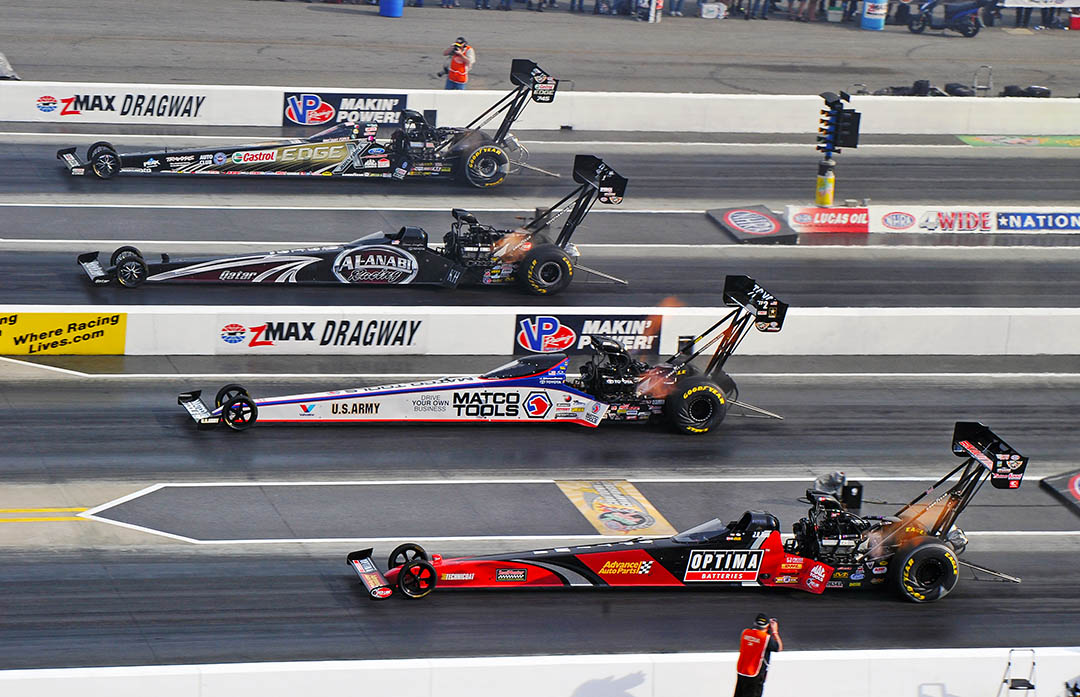 Team Force is at it again, as the NHRA rolls into Charlotte’s ZMax Dragway for the NHRA 4-Wide Nationals this weekend.  In Funny Car, Hight is currently sitting in the No. 2 spot, Courtney is in the top half of the field, and Brittany showed most of the field how to get down the track with a 3.800 that put her in the No. 4 spot in the tough Top Fuel field. The tricky ZMax track has proven not only to be a strain on the drivers themselves, but also the crew chiefs who are struggling to find the right combo of power and clutch in the quest for a 4-Wide win. Force Racing’s patriarch, John Force, is one of the guys struggling, as he was only able to run a 4.441 at 204.80 so far. 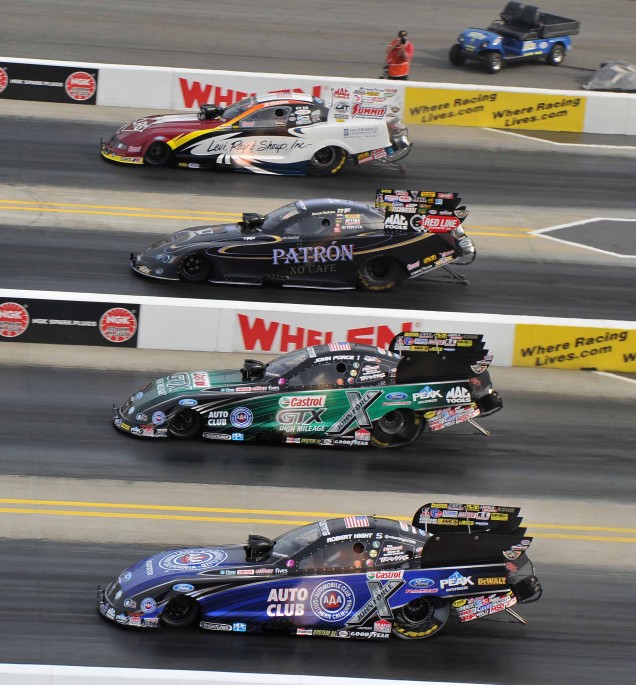 “When (crew chief Mike) Neff starts out good like he did today he is pretty steady and pretty tough. I like our chances this weekend,” said Hight.

“It is double the cars but it is not that big of a deal. I just try and get in there and get ready. The biggest thing is you don’t want to pay attention to all the other cars. You don’t want to think (Alexis) DeJoria is in lane three and John (Force) is in lane two and someone else is in lane one. It doesn’t matter who is over there. You can’t go until we are all in and ready to go. I just watch and when the last person lights the light you go on yellow. I try and make it as simple as possible,” said Hight, the current Funny Car Mello Yello points leader

“I like (Four-Wide) because in all honesty you get two second chances on Sunday. All you have do is be the second quickest car in the first and second round and obviously you want to be the quickest. If you are the second quickest you get to move on. There are only three rounds. This is a great race to capitalize and gain some points. We got four bonus points today.”

Courtney Force ended the first day of qualifying today with a strong 4.086 second run to put her in the top half of the field. The 25-year-old has competed at zMAX Dragway under the Four-Wide set-up twice before and she has qualified No. 12 both times.

In the first qualifying session, Force smoked the tires early in her run and posted a 5.996 ET. 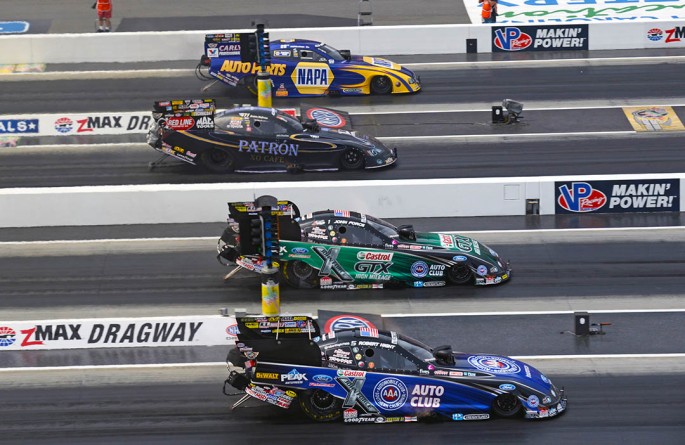 “It’s the only place on earth you can get this kind of racing. It’s exciting but it’s very chaotic up there. I was nervous going out for my first pass. We struggled a little bit. We had some tire shake and coasted down the race track,” said Force.

“On the second pass today, we were able to go up and improve in lane two. We ran a 4.08 to get into the top half of the field. I’m really proud of my Traxxas Ford Mustang team. They’ve busted their butts this weekend. I know it’s a little more chaotic than a regular race weekend. I’m always proud when we can get the car down the race track with a good pass like that on the first day of qualifying.

“As a driver, it is more confusing. When you’re in lanes three and four you have to look over at the tree to find your bulb and you really have to be on your A-game. I think it’s a lot of fun for the fans to watch, especially with 40,000 horsepower going down the track all at once. We’re excited and we’re going to be ready to see what we can run tomorrow,” said Force.

John Force and his Castrol GTX High Mileage Mustang struggled today during qualifying. After two sessions, the 16-time Funny Car champ could only manage a 4.441 elapsed time at 204.08 MPH and is currently in the 15th spot.

“This Four-Wide is a whole different ballgame. It’s good for a TV package as you can get more in less time for a show and the fans are loving it because it’s 40,000 horsepower of nitro and smoke in the stands and they can’t breathe up there, it’s spectacular,” said John Force.

During the first run today, John Force’s Castrol High Mileage Mustang didn’t run too strong and clicked off a 4.441. On the second qualifying run, John Forces smoked the massive Goodyear slicks tires before half-track, and therefore had to shut down his 8000-horsepower Funny Car to avoid getting sideways and contacting the retaining wall.

The NHRA Four-Wide is also playing hardball with the chiefs as once again, it is proving to be very challenging, and regardless how many times they’ve raced in this format and collected data from the prior events.

“For the crew chiefs, they got to fight it. If you’re the fourth pair in a 16 car show, the crew guys have to make decisions on the spot. Once they fire that first car, it’s only a few minutes and you’re up there. Then there are the lanes when running here. You don’t go to the lane you ran on the last run. You go to a completely different one and you’re end up staying lost all the time. Over the course of two days, you do end up running four lanes so it’s a job for them,” said John Force.

As a driver, the NHRA Four-Wide Nationals is less than routine and can even put their senses on massive overload. With so much going on, even a seasoned veteran like John Force finds it challenging.

“For the driver, it’s more bulbs than anyone has ever seen and it is mind boggling. You try to focus and if somebody breaks, the starter comes running over but what is he telling you? A single in lane two, three, four? It’s mass confusion but that’s what makes it exciting as I have more fire in me at the four wide and with the investment Bruton Smith has made, he deserves it,” said John Force.

While other racers struggled, Brittany Force showed the competition that she and her crew have figured out the tricky NHRA Four-Wide Nationals by qualifying her Castrol EDGE Dragster in the fourth spot with a strong 3.8000 elapsed time at over 325 mph. Along with being solidly in the top-half of the field, Brittany was also rewarded with a NHRA Mello Yello bonus point for her efforts. 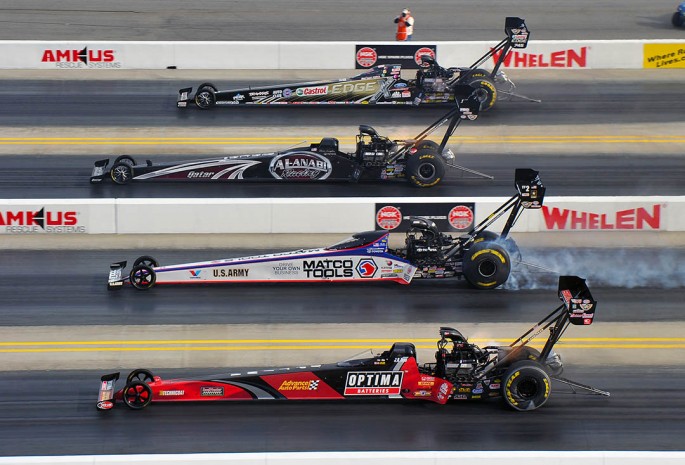 “I am excited to be in Charlotte for the Four Wide. It is always a great show for the fans. You get to see four races cars at once go down the track and that is always exciting. It was louder than I remembered from last year,” said Brittany Force

Brittany’s first pass of the day was a tire smoking 5.610 elapsed time that didn’t sit too well with her and the team. Not to be discouraged, crew chief Todd Smith and Dean “Guido” Antonelli rallied the troops to came back and blister the pavement at zMAX Dragway with a 3.800 run on the second session.

“The first run we went out and smoked the tires so we didn’t put up a good number. We definitely made up for it in the second session. I ran a 3.80 and we would up No. 4. I am very happy and proud of my Castrol EDGE team,” said Brittany Force.

Lonestar Round Up 2014 - More Great Photos From Top Notch Burgers Friday BOOM: A Blown Slick Tears a 1938 Chevy to Shreds