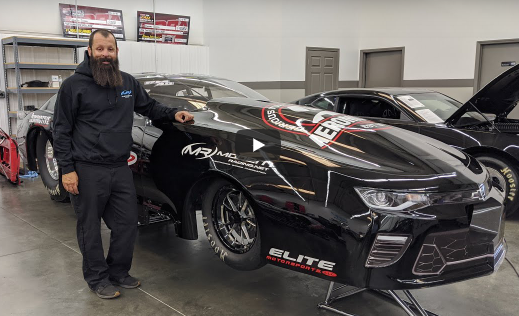 Our boy Lyle Barnett is living the dream in 2021, after putting together a deal to drive the Elite Motorsports ProCharged Camaro in NHRA’s E3 Spark Plugs Pro Modified. His plan is to run every event and go for a championship in 2021, and they are looking for sponsors to help make that a reality. If his performance at the recent US Street Nationals in Bradenton are any indication of his capabilities in the car, then everyone should be clamoring to get their name on this car. Lyle is a fan of Yuengling Light, and has even started an Instagram campaign to get Yuengling to look at the rendering he’s had done and everything. The team is excited about 2021, has sponsorship for the first few races of the year, but to go after a championship seriously is what the entire Modern Racing and Elite Motorsports team plans to do.

Lyle has always been known for his talent behind the wheel, including his ability to chop a tree down, and is well liked by fans and competitors alike. His tragedy to triumph story, involving a horrible fire that tried to kill him just over 5 years ago at South Georgia Motorsports Park, is one that he doesn’t take lightly. He knows that he’s lucky to be alive, takes safety very seriously, and wants nothing more than to continue to prove that he belongs in a race car. His 2021 racing efforts will not be exclusively behind the wheel of the Pro Mod, as he’ll be wheeling Jason Digby’s Tooth Jerker Dodge Dart as usual in Limited Drag Radial competition, and also the now famous Beer Money Mustang in small-tire No Prep events on the east coast.

Below you’ll find video that Lyle put together of every run he made during qualifying and eliminations at the recent US Street Nationals in Bradenton where he went two rounds in his NHRA Legal Pro Mod during an Outlaw Pro Mod event. The car was a tenth slower than the quickest outlaws in the field, but Lyle was not and his car and his reactions served him well.

IF YOU HAVE A POTENTIAL SPONSOR LEAD, PLEASE CONTACT ME VIA EMAIL [email protected]