Finnegan Wants To Throw Big Tires, Big Turbos, And More At This Rad Caddy, And Then He Wants To Run 8s And Go 200 In It! 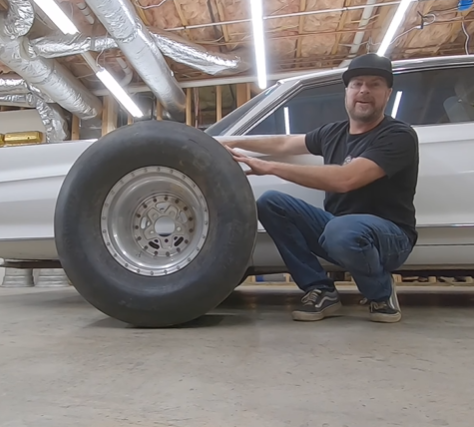 When Finnegan decides to do something, you always know it is going to be a little bit fun, a little bit crazy, and at least a little bit impossible. Because why would you do something boring and easy and that makes sense to everyone else? Such is the case with this super rad new Caddy that he got and wants to throw giant wheels and tires under. But why would you do such a thing to a 1961 Cadillac? Why not? You see, Mike wants to have a giant car that he can load up with all his friends and take on Rocky Mountain Race Week, Drag Week, etc and that will run 8’s despite weighing closer to 5,000 lbs than 4,000. He wants to do this because it sounds like a riot, and we couldn’t agree more. And as if that isn’t enough, he also might want to show up at a standing mile event and rip off a 200 mph run or two. Yeah, we know how crazy and hard that is. Trust us.

Watch this video as he and Newbern look at wheel and tire size options and go about mocking stuff up to see just how cool it might look and what might work. Then it’s off to get some chassis work done before the loud stuff starts happening.

Defy Physics: Watch As This Remote-Controlled MiG-29 "Fulcrum" Dances On The Wing Your Morning Symphony: A Collection Of Supercharger Whine - It's Best Part Of Waking Your Engine Up!

14 thoughts on “Finnegan Wants To Throw Big Tires, Big Turbos, And More At This Rad Caddy, And Then He Wants To Run 8s And Go 200 In It!”