James Reeves’ 10 Second 1986 Dodge Omni GLH Really Does Go Like Hell. This Is What A Hot Hatch Looks Like 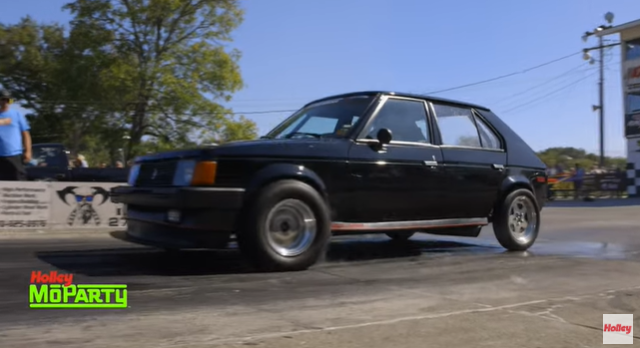 When I am announcing any event and a GLH comes up to the line I am obligated to teach people what the GLH actually stands for, and in all reality it means Goes Like Hell. When the GLH prototypes were being tested, there was no doubt it hauled ass, and when one engineer said “It goes like hell.” it stuck. In an era where lots of Mopars, and everyone else’s cars for that matter, were getting letter designations it only made sense. The rest is history, as the GLH and the Buick Grand National became fierce rivals. At the time, there were events where shootouts featuring these two were the main draw. It was an interesting time, because most muscle cars made very little power at the time so these two boosted beasts were the most exciting things to watch.

This one here is not stock, as you can imagine, and features a bigger engine from a minivan, Holley EFI, and some other tricks in order to run 10s and be dependable on the street. We love it, would totally drive this thing, and think it is pretty rad even if the wrong wheels are driving it. Oh, and did we forget to say that it makes almost 600 to the tires?

If You Won The Billion Dollar MegaMillions Jackpot, What Crazy Expensive Thing Would You Buy In A Hurry? It Ain't Cheap But It's Cool! This LS Swapped K10 Chevrolet Is Lifted Greatness On Super Swampers And Makes Me Drool

5 thoughts on “James Reeves’ 10 Second 1986 Dodge Omni GLH Really Does Go Like Hell. This Is What A Hot Hatch Looks Like”